The yen, FX intervention and the BOJ’s yield curve control

The yen has been a key focal point for momentum traders during its sharp depreciation, to the extent it could risk a BOJ intervention or cancellation of their YCC target.

Aggressive monetary easing and ‘inflation overshoot’ to remain in place

On Friday the BOJ governor Haruhiko Kuroda said that the central bank should continue to apply “aggressive money easing” to achieve their 2% inflation target in a “stable manner”, adding “there is still a long way to go to achieve the 2% target”.

Commodity prices have been the key source of inflation in Japan, unlike the demand-pull inflationary forces seen in the West. Yet even with a staggering commodities rally inflation continued to undershoot their 2% target consistently (much unlike the west).

Quite rightly, Kuroda has no concerns of the inflation overheating, so the BOJ will continue to commit to overshooting its 2% inflation target (a level it has not reached since 2015). And we wish them good luck, as the consensus view from economists is that inflation will peak at 1.8% this financial year before tailing off in 2023.

The volatile depreciation of the yen has been a concern for some traders as it has reignited fears that the BOJ may intervene to support their currency. Indeed, that have been active over the years and provoked some sharp reversal merely by hinting about FX intervention.

Kuroda also said that “very rapid yen” moves provided a negative impact on the economy, even though he is an advocate for a weaker yen. A couple of weeks ago, Japan’s finance minister said that a weaker yen is more damaging Japan’s economy overall, relative to any benefit it brings.

Furthermore, he said that “stability is important and sharp currency moves are undesirable”. On the face of it we can assume that Kuroda and the finance minister are against higher yen volatility, even if they do not see eye to eye on its direction.

Forget any chance of BOJ hiking any time soon.

One way the BOJ could support their currency is to raise interest rates. Yet with inflation continuing to undershoot by a wide margin, the odds of such a move are almost non-existent. And former PM Shinzo Abe concurs, having said yesterday that it would be “clearly wrong” for the BOJ to control their currency by raising interest rates. So rate hikes are off the table, and FX intervention appears unlikely – unless they ditch YCC (yield curve control).

Will the BOJ intervene with their currency? 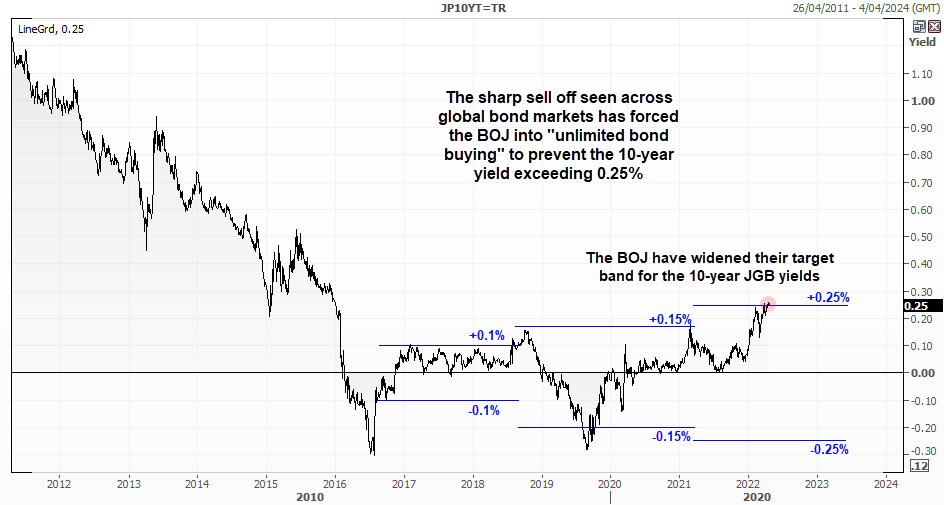 Despite the rapid decline of the yen it seems unlikely that the BOJ will intervene to support it. And big reason why is their YCC target (yield curve control). They have been capping the yield of the 10-year JGB since 2016, initially within a band of +/- 0.1% before widening it to +/- 0.25%.

Each time yields rise (as bond prices fall) it forces the BOJ to buy bonds to prevent yields from exceeding the upper band of the target. Due to the global selloff of bonds it has forced the BOJ to recently initiate “unlimited bond buying” to keep yields lower. Japan is the largest buyer of US treasuries, the purchase of which weakens the yen. So whilst the BOJ can prevent yields from rising they cannot simultaneously intervene to support their currency. In a nutshell, the BOJ can either control their currency or yields, but not both.

So, whilst the BOJ maintain “unlimited bond buying” it effectively removes FX intervention from the table. What we are looking out for (at any of the upcoming BOJ meetings) are for any subtle clues they may be losing faith in YCC. Because in doing so it could signal an appetite for the BOJ to intervene and reverse the downtrend of the yen.

A policy divergence between the Fed and BOJ has seen USD/JPY come close to testing 130, a level some had pencilled in as a ‘line in the sand’ for FX intervention. It is therefore no coincidence markets reversed at that level initially, even if the odds do not favour such a move. Yet concerns of slower global growth alongside an extremely hawkish Fed same markets enter risk-off mode last week, so the retracement seen across yen pairs was deeper than initially thought. 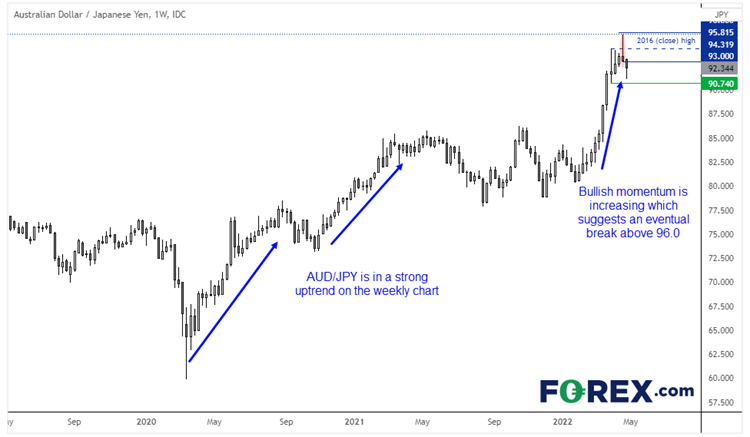 We can see on the AUD/JPY weekly chart that it has been in a strong uptrend since the 2020 low. Bullish momentum has also accelerated during its 2022 rally which suggests prices will eventually break above 96 and continue higher. However, a bearish hammer formed just below the 2016 close high, ahead of last week’s selloff and the market is now within a retracement phase – and could remain within the 90 – 96 range over the foreseeable future. 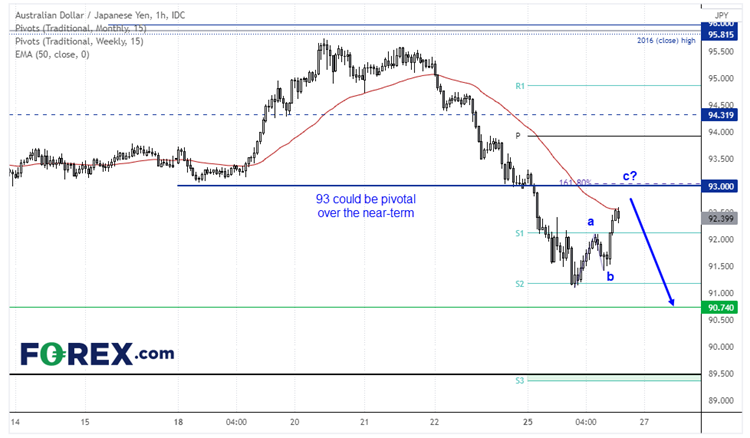 The 1-hour chart shows prices have formed a 3-wave move from this week’s low, although resistance has been met at the 50-hour eMA. Should prices break below 92 then the corrective high has likely been seen and we would then look for a break of 90.74 support. However, given the fact equity markets traded higher then there is the potential for further gains over the near-term towards 93.0 – a level we could consider fading into should signs of a top materialise.