Despite the sharp sell-off in US technology sector, European stock indices were still trading mixed at the time of writing.

Despite the sharp sell-off in US technology sector, European stock indices were still trading mixed at the time of writing. The top shares indices in Italy and Spain were higher, while Germany and the UK were tracking Wall Street lower. This comes after the major global indices closed firmly in the black last week, with shares on Wall Street making good the falls from the previous week. Europe underperformed again last week, with the DAX and FTSE making back only half or less of their losses from the week before.

In Europe, sentiment remains cagey not only because of Brexit, but also concerns over trade. The imposition of the recent tariffs in the US on European exports of metals is obviously taxing. But it is also the growing trade spat between the US and China which is having an indirect impact on European markets. This is because of concerns that the US tariffs are hurting China, so demand from the world’s second largest economy for European goods and services may suffer.

Indeed, European mining shares and metal prices fell today on the back of news US President Donald Trump was planning to unveil an additional $200 billion in tariffs on China.

The news also weighed heavily on Apple shares with China being one of its biggest markets. The iPhone maker had already warned earlier this month that tariffs on Chinese goods could hurt its business. Investors have also been unimpressed with the company’s introduction of new iPhones last week. Among other US tech shares, Twitter dropped almost 4% on the back of a broker downgrade, while shares in Amazon also broke down sharply.

Government bond yields on the rise

Sentiment was also hurt by rising government bond yields today. The 10-year US Treasury yield rose above 3% again to reach its highest level since May 23, before easing back a little. Yields on 10-year German and UK government bonds rose even sharply, underpinning the EUR/USD and GBP/USD exchange rates. The stronger exchange rates are seen as being negative for European exports and earnings made overseas.

That all being said, it was not completely “risk-off” across the board. In fact, the markets may have already found a base following last week’s reversal and today’s selling could just turn out to be a retracement. With the US indices all hovering near their previous record highs, this view would make a lot of sense. Even European indices could be about to break higher following their dismal performance of late – see the comparison chart below. Chief among them has been the German DAX – only Spain’s Ibex has performed worse by falling about 4.5% year to date. If there’s any positive developments with regards to global trade, then China and European markets could make a significant comeback and catch up with their US counterparts soon.

The DAX did manage to regain its poise last week, rising about 250 points from around a long term support area in the 11900 region. Despite the rebound, it could not break a critical resistance area around 12105-12150 after several attempts last week. This was formerly a key support area. Thus, while the index remains below here, the buyers will not be in full control and as such any short term bullish developments below this area should be taken with a pinch of salt. But if and when the DAX breaks through that 12105-12150 resistance area then we could see the onset of a much larger recovery. As a minimum, we could see the gap below 12210 get filled, although we would look for a move to the next level of resistance around 12300 as the next bullish objective under this scenario. But if the resistance holds and short term support levels such as 12040 and 11955 give way, then we wouldn’t rule out the possibility of a drop below 11725, the low hit on March 26. 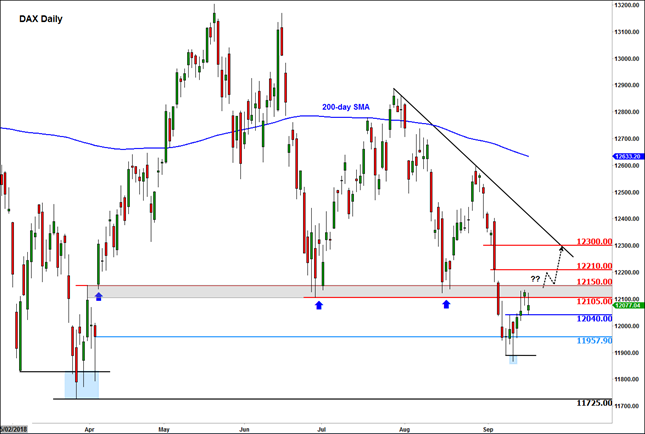