TRY this: GBP/TRY could be forming a major base

To prevent the lira from falling significantly, the CBRT may intervene in the FX markets. The Turkish central bank, which had been trimming interest rates in the last couple of years, is now widely expected to keep rates unchanged at its meeting tomorrow. But we wouldn’t be surprised if it were to temporarily raise rates to support its currency, although this is not our base case scenario. Over time, interest rates will need to be reduced significantly in order to stimulate demand in the economy. But at the same time, this will reduce the appeal of the lira as a higher yielding currency for foreign investors. So whichever way you look at it, the outlook for the Lira looks dire unfortunately.

In fact, capital has been flowing out of Europe as a whole already and last week the European equity funds suffered their largest outflows on record, according to data from EPFR and Bank of America Merrill Lynch. Some $5.8 billion were withdrawn as the run of outflows stretched to 23 weeks. In contrast, the US equity markets enjoyed their largest inflow since September 2015 as the S&P 500 broke to new all-time highs.

The outflows from the UK equity funds have also been a theme in recent times due to concerns over Brexit. But here, the political situation has been resolved remarkably quickly and although the Bank of England appears ready to ease its monetary policy more aggressively in August, this is mostly priced in. So, the impact of a potential rate cut and/or more QE on the severally oversold pound could be limited and temporary. As such, I think that pound could be near a bottom, especially against weaker currencies, such as the euro and now the Turkish lira. So, look out for potentially strong gains for the GBP/TRY cross over the short to medium term outlook.

In fact, from a technical point of view, the long-term chart of the GBP/TRY suggests a new upward trend is about to begin. As can been seen, the cross formed a large bullish engulfing candle on its weekly chart last week, which suggests there was a shift from selling to buying pressure and that the previous downward trend may have ended. It is interesting to note also that the reversal pattern has occurred around a long-term support level and psychological level of 3.7500, which was formerly resistance. In addition, the area around 3.7500 converges with the support trend of the bearish channel. The bearish channel could turn into a long-term bullish flag continuation pattern, should the resistance trend of it break down at some point in the future.

Indeed, the rising 200-week moving average tells us that the long-term trend is still bullish and that the recent short-term downward pressure could just be a pause on this time frame, which, if correct, should provide new opportunities for long-term investors to reload their positions. The technical outlook should become clearer in the coming days and weeks as price tests liquidity zones around key support and resistance levels. The fact that the GBP/TRY has been able to hold its own today above the high from a couple of weeks ago of 3.8765 is technically a bullish sign in the short term outlook.

But soon it needs to clear major resistance in the 3.9540-4.0000 region before the short-term downward trend gets violated and new buyers potentially emerge. If seen, significant gains could potentially follow or at least we could see a rally towards the next reference point at 4.1220 or the top of its channel slightly higher. However if support at 3.8765 gives way on a daily closing basis, then there is a risk that GBP/TRY could head back towards the support trend of its short-term bearish channel, or even fall further lower. Whatever the outcome, expect to see lots of choppy price action in the short-term outlook before the market decides on a clear path. 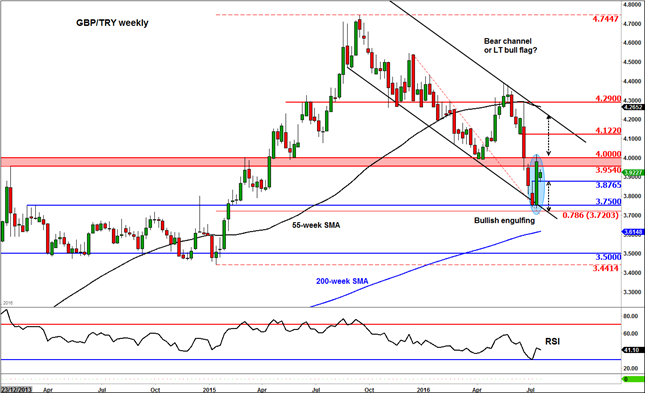