Share:
As polling stations in the UK closed at 10 PM local time on Thursday, exit polls began reporting rather shockingly unexpected results. Early exit polling projected that current UK Prime Minister Theresa May’s Conservative Party would lose its majority in Parliament, resulting in a likely hung Parliament. While Conservatives would still be the largest party represented, the lack of an overall Conservative majority injects a great deal of uncertainty into the future of UK politics and heavily complicates the ongoing Brexit negotiations with the European Union. The pound plunged immediately on news of this probable hung Parliament, rapidly dropping down to a low around the 1.2700 handle before paring some of those losses.

Conservatives needed 326 seats in order to gain an absolute majority in the Commons, but projections based on exit polls suggested that they would only win 314 seats – 12 seats short – against the Labour Party’s projected 266 seats. Probably the worst possible outcome for sterling that could have come about, a hung Parliament will ensure prolonged political uncertainty in the UK and the Brexit process, and potentially continue to weigh on the pound at least in the near-term foreseeable future. Clearly, this was not anything near what Theresa May was expecting when she called for snap elections back in late April as Conservatives then enjoyed more than a 20-point lead over Labour in public polling.

The projected outcome of the UK election as of Thursday evening places the fate of Theresa May and Conservatives in serious jeopardy, as the prospects of a hung Parliament and potential coalition government are no simple matters and will undoubtedly be fraught with extreme uncertainty. It is this uncertainty that will likely continue to weigh on the pound going forward. The GBP/USD drop on Thursday evening prompted a clear breakdown below a key uptrend line extending back to mid-March. The breakdown also breached key support at 1.2800. If final election results early Friday morning corroborate the current exit poll projections, GBP/USD could be pressured further towards a 1.2600 support target. Any further breakdown below 1.2600 would constitute an exceptionally bearish technical event, with the next major support level around 1.2350. 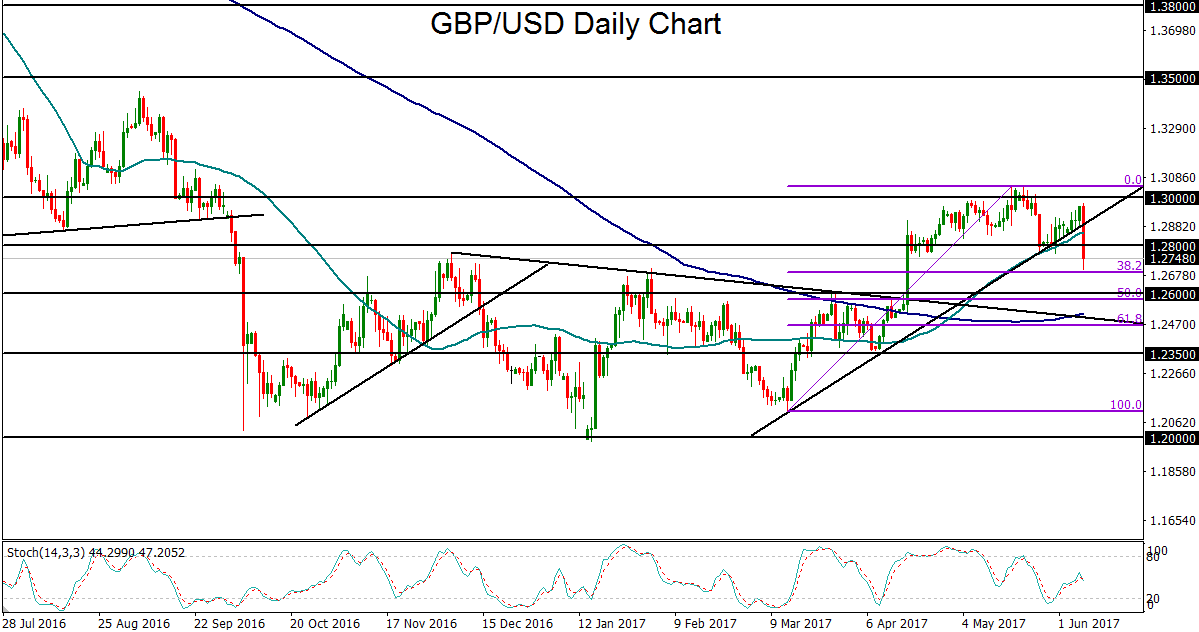