The UK inflation figures were stronger than anticipated, with headline CPI rising at a 0.6% rate rather than 0.5% that had been widely expected. The impact of Brexit was very clear as a significantly weaker pound caused the price of goods and raw materials purchased by manufacturers to soar.

The UK inflation figures were stronger than anticipated, with headline CPI rising at a 0.6% rate rather than 0.5% that had been widely expected. The impact of Brexit was very clear as a significantly weaker pound caused the price of goods and raw materials purchased by manufacturers to soar. The 3.3% month-over-month jump in PPI input was much stronger than 0.6% expected, but it looks like most of the costs were absorbed by manufacturers as factory gate prices only rose 0.3% on the month. Still, the weakness of the pound has been sustained since the Brexit vote in June because of the Bank of England’s corresponding stimulus measures. So in the coming months, we could see further signs of rising inflation. But the potential weakness in economic growth, as a result of Brexit, would likely be disinflationary, which would offset some of the impact of a weaker currency on prices. Thus, today’s inflation data is unlikely to be a gamer changer as far as the Bank of England’s monetary policy is concerned.

Indeed, the FTSE was able to bounce nicely off its earlier lows, although the pound held on to its earlier gains, to trade at just shy of 1.3 against the US dollar. In the afternoon, the GBP/USD could turn volatile again in reaction to the US data dump, which also includes CPI among other things. The cable is holding within its established short-term bearish channel below 1.30 at the time of this writing, although should it manage to break above this psychological barrier later then we could see price squeeze towards the next potential resistance at 1.3065. Ultimately however, the path of least resistance remains to the downside, despite today’s rally.

Meanwhile the domestic focus will turn to UK jobs and wages data on Wednesday. The FTSE, already among the top performing stock indices out there due to the Bank of England’s re-introduction of QE, could benefit further from potential weakness in UK data tomorrow as this would encourage the BoE to remain uber-dovish for longer. Indeed, the UK benchmark stock index has been virtually on a tear since the initial wobble post the Brexit vote. It is now not too far off the psychological level of 7000 or its prior record high of 7122 achieved in April 2015. But potentially rally could go far beyond those levels, with the projected target of the recent inverse head and shoulders pattern being at 7360 and the 127.2% Fibonacci extension of the move down from the prior record high residing at 7565. These are among our short-to-medium term bullish targets. 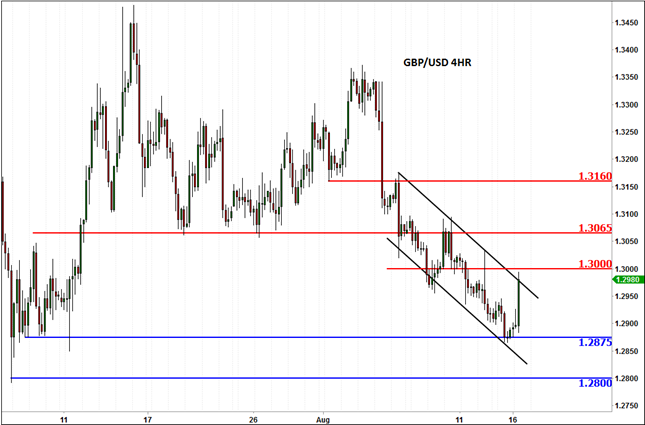 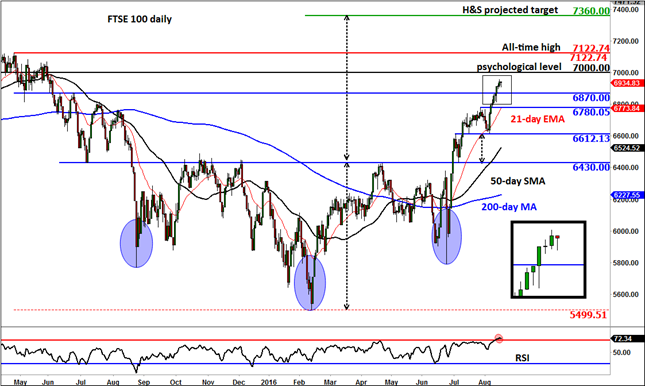