US dollar to dominate currency moves in the busy week ahead

Aside from major geopolitical risks that should continue to dominate headlines next week – including a potential stand-off between the US and North Korea over the latter's nuclear provocations – currency markets in the first week of May will likely be dominated by economic event-driven moves in the US dollar.

Aside from major geopolitical risks that should continue to dominate headlines next week – including a potential stand-off between the US and North Korea over the latter's nuclear provocations – currency markets in the first week of May will likely be dominated by economic event-driven moves in the US dollar.

In addition, as French voters approach the final round of their pivotal presidential election on May 7th, the euro could also see some significant movement even as the market-friendly centrist, Emmanuel Macron, continues to poll far ahead of his anti-euro rival, Marine Le Pen. The EUR/USD could therefore be the pair to watch and trade amid an exceptionally busy economic schedule next week.

The two most important US-based economic events occurring next week will center around Wednesday's May FOMC meeting and Friday's US jobs report for April. Though markets are not expecting any major policy change (i.e., interest rate increase) from the Fed so soon after the March rate hike, there will be a clear focus on any indications surrounding both the potential trajectory of rate increases going forward as well as the Fed’s vaguely-stated intentions to shrink its massive balance sheet. If the reduction of this balance sheet is a primary topic of discussion at the FOMC meeting and on the Fed’s statement, the dollar could receive a significant boost.

Friday then brings the eagerly anticipated US jobs data for April, including the monthly non-farm payrolls report. After the previous month’s highly disappointing 98K jobs added in March against the ~175K expected, the current forecast for April’s gain in jobs is around 195K. The actual outcome will be critical in its ability (or inability) to redeem March’s data weakness in the eyes of the Fed.

The jobs data will especially be critical in view of the disappointing US GDP number that came out on Friday, which showed an annualized growth rate of just +0.7% in the first quarter against consensus expectations of +1.2%. Though this disappointment was essentially shrugged off by markets on Friday, it could have some impact on Fed discussions going forward.

On the euro side, in addition to anticipation surrounding the French presidential election’s final round on the following weekend, next Wednesday also brings the euro area’s preliminary flash GDP for the first quarter. Expectations are for a +0.5% quarterly growth rate. If this number is hit or exceeded, it will place the euro area in stark (positive) contrast with the significantly weaker numbers released by the US, UK, and Canada on Friday.

In the midst of next week’s data-heavy economic schedule, EUR/USD continues to remain in consolidation just off 1.0950-area resistance after having risen to this level in the aftermath of the first round of the French elections. That is when Macron’s clear victory and increasing support gave markets confidence that he would ultimately prevail over his far-right rival, Le Pen. Since the EUR/USD surge after that first round, the currency pair has yet to fill the gap to the downside, displaying a further indication that euro sentiment has potentially taken a significantly positive turn. Amid next week’s key data points, especially those centering around the US dollar, any upside EUR/USD breakout above 1.0950 would constitute a key technical event, which could then lead to further upside momentum towards the 1.1100 and 1.1300 resistance areas. 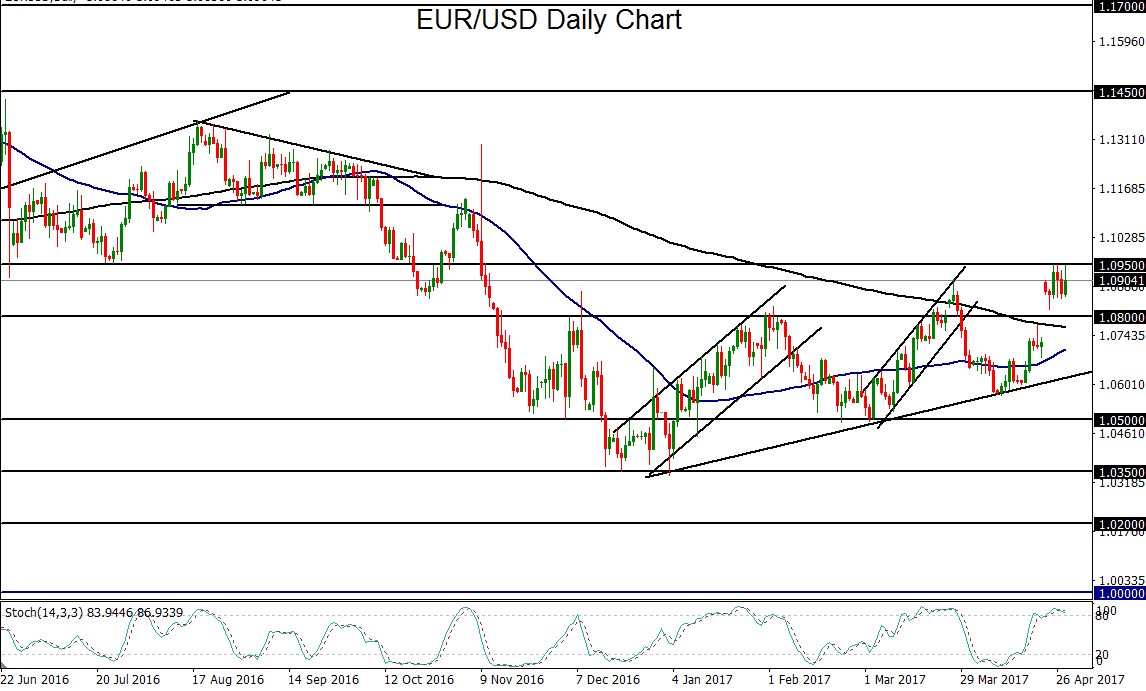