Major US indices are poised to open near flat after the Dow Jones Industrial Average saw its biggest decline since January on yesterday’s US CPI reading showING prices rose 4.2% over the same period last month, the highest reading since 2008. Sorting by market cap, every one of the 34 largest US stocks fell yesterday, and traders would have to scroll all the way down to Pfizer to find a large company that didn’t fall amidst the broad-based selling pressure.

After yesterday’s price action, readers should expect to hear traders, economists, policymakers, and pundits endlessly debate whether the unexpected spike in prices was due to short-term “transitory” factors or a secular rise in inflation until we get next month’s CPI report (June 10 for those following along at home).

Separately, European indices are on the back foot amid half-holiday trade with countries like Germany and France off for Ascension Day.

The weekly report on new unemployed Americans showed “just” 473k new claimants. This is the lowest reading in more than a year, and combined with yesterday’s hotter-than-expected CPI report, signals that the US economy is fitfully returning to normal. Friday’s retail sales report will be the next major data point to watch out of the world’s largest economy.

Mercurial billionaire Elon Musk surprisingly announced yesterday afternoon that Tesla Motors would no longer accept Bitcoin for payment for its vehicles, citing the environmental cost of the cryptoasset. The impact on Bitcoin was severe, with the cryptoasset falling a full $10,000 before recovering slightly to trade near $50,000 as of writing, but the traders seem to be cheering the move from Tesla’s perspective, with the EV manufacturer poised to open 1% higher.

Technically speaking, TSLA is trading near the bottom of its 6-month range, with potential support levels coming in at the 200-day EMA ($580), as well as previous support levels at $540 and previous-resistance-turned-support at $500. 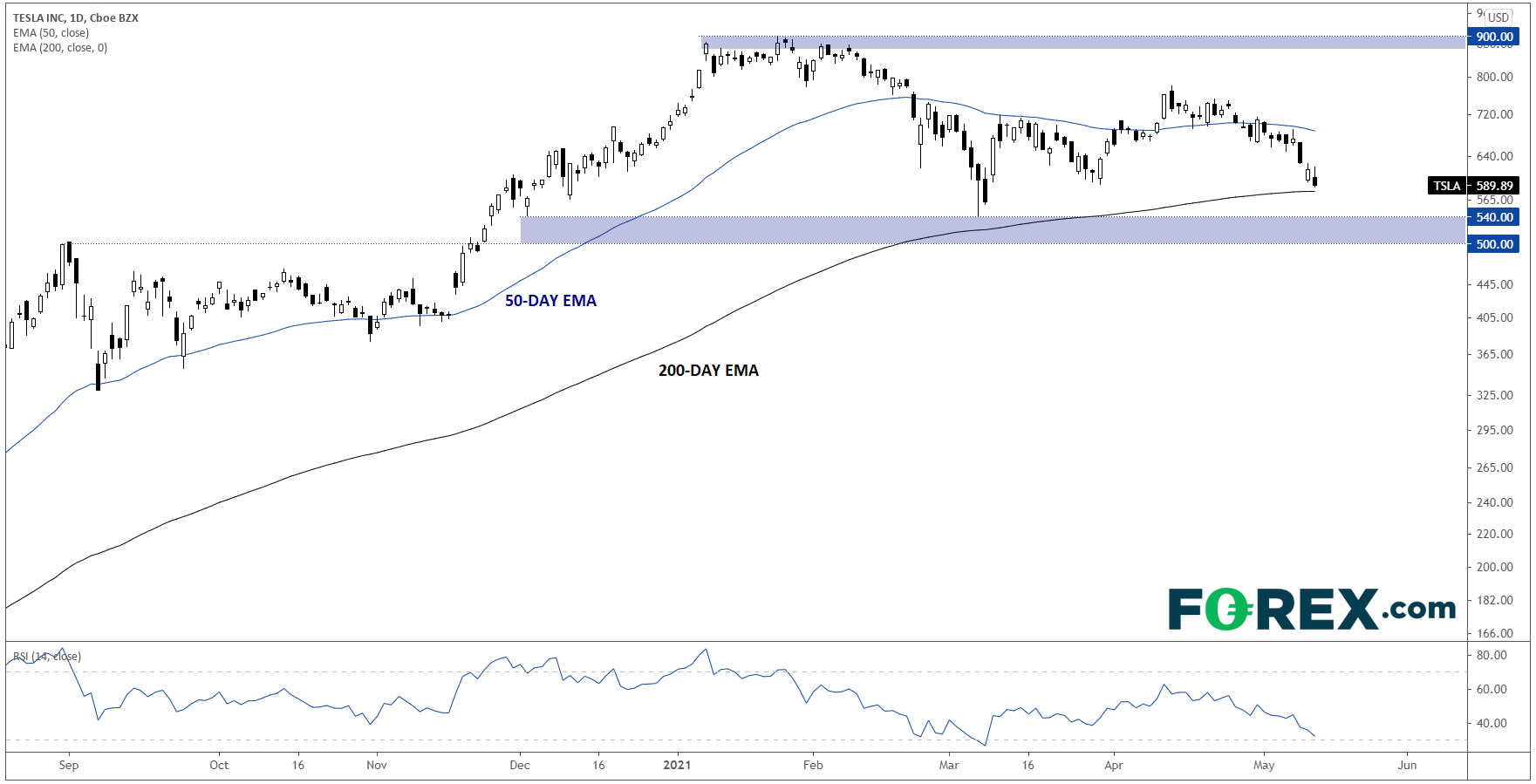 It’s been a relatively quiet day in the FX market so far, with the euro and Swiss franc topping the relative performance charts while the Australian dollar brings up the rear. Traders will tune into speeches from the heads of the Bank of Canada (at 11:00 EDT) and Bank of England (12:00 EDT) as possible risk events, but more generally, the FX market should take its cue from equities and general risk appetite following yesterday’s big risk-off move.

Oil slips on restoration of US supply, ongoing COVID hit to India’s demand

Oil is trading lower as the disrupted Colonial Pipeline resumed operations on the US East Coast. The pipeline operator stated that “all lines, including those lateral lines that have been running manually, will return to normal operations.”

Separately in India, the world’s third largest importer of oil, fuel consumption fell nearly 10% in April relative to March. With the ongoing COVID crisis continuing unabated, the demand shock to India may take longer to resolve and keep oil prices under pressure in the near-term.