As of this writing, the current analysis of the electoral college map is predicting around 273 votes for Clinton against 186 for Trump, with 270 votes required to win the presidency. However, these numbers include key battleground states that are expected to swing to a certain side, but are far from guaranteed to do so. Also, “toss-up” states – like Florida, North Carolina, Ohio, Arizona, and Nevada – are still extremely difficult to predict in the month of campaigning that remains. Much could still change in this historic and potentially volatility-inducing run-up to election day in early November.

Whichever way the final vote tally ultimately goes, the consequences could potentially be far-reaching. In the financial markets, these consequences are apt to lead to significant market price movements and volatility, all depending on the rapidly unfolding outcome and the prevailing market sentiments towards the two primary candidates. Generally-speaking, the first year of a new president’s term is not a very good one for equity markets, as uncertainties dominate. This could be even more true with either Trump or Clinton in office, leading to enhanced potential volatility.

With back-and-forth attacks continuing on a daily basis between the two candidates, the financial markets have already seen some volatile moves. Most notably, the dollar has risen partly on the more likely prospect of a business-as-usual, status quo president in Hillary Clinton, although much of the dollar’s recent rise can be attributed to greater expectations for a Federal Reserve rate hike this year. Safe haven assets like gold, in contrast, have fallen sharply due to the expected Fed move, a rise in the dollar, as well as lower risk of the uncertainty that would likely accompany a Trump victory. Meanwhile, the equity markets have also seen some elevated volatility in recent days, but this has been due to several different factors, including fluctuations in crude oil prices, the onset of earnings season, rate hike worries, as well as some concerns about both presidential candidates.

Overall, the two candidates represent virtually polar opposites when it comes to many of their respective economic policies and issues of concern. One of these candidates, a billionaire real estate mogul billed as the ultimate outsider, Donald Trump aims to shake up the US political establishment, which could potentially cause extensive market volatility along the way. The other candidate, a classic Washington insider with deep ties to the current administration and the political status quo, Hillary Clinton is seen as a relatively safer alternative for the financial markets, as she is essentially considered by many to be a potential extension of President Obama's legacy into a third (and possibly fourth) term.

Going forward, as their key economic policies differ in so many ways, Trump and Clinton should each have a substantial, but very different, impact on various key financial markets in the event of victory.

In the current run-up to the early November elections, we have already seen some nervous volatility in the equity markets, partly due to concerns that the outsider, Donald Trump, who remains largely an unknown quantity when it comes to political leadership, will likely be exceptionally unpredictable and potentially precarious in his handling of global and domestic economic issues. But Trump's more business-friendly support of substantially lower corporate tax rates and financial de-regulation could help to provide a boost to investments and stock markets, at least in the initial phase of a Trump administration. With that being said, however, the likely possibility of setbacks in international trade due to his staunch protectionist trade policies and an increasing deficit under Trump due to his sweeping tax cut proposals could eventually have a significantly negative effect on the US economy and equity markets.

At the same time, although Hillary Clinton imparts a more business-as-usual sentiment on the financial markets due to her tacit agreement with most of the status quo economic policies of the current Obama administration, Clinton's increasingly fervent stance against major financial and corporate institutions, and in support of high corporate tax rates and significantly extended financial regulations, could ultimately weigh heavily on growth, investments, and key equity markets.

As for the US dollar, Trump has repeatedly stated in public his position that the US Federal Reserve and Fed Chair Janet Yellen have been politically-motivated in keeping interest rates low. He has essentially accused the Fed of attempting to create false appearances of a healthy economy and stock market to embellish the Obama Administration. Trump has deemed the rising US equity markets as a “false stock market” that has been propped up by an overly accommodative Fed. This stance against what he sees as politically-driven dovishness provides a hint that if Trump gains the highest office in the land, he may be keen on instituting a more hawkish Fed. In that scenario, the possibility of higher interest rates going forward could lead to a stronger US dollar. In addition, Trump’s rhetoric on international trade issues has deemed his policy position as heavily protectionist. At least initially, this stance could lead to a further boost for the US dollar, especially against emerging market currencies like the Mexican peso and Chinese yuan.

As mentioned, Clinton is seen as the status quo candidate, unlike Trump. This status quo also extends to the very lengthy period of extremely accommodative monetary policy from the Federal Reserve. A Clinton administration is likely to continue favoring a more neutral-to-dovish approach to US monetary policy, in contrast to Trump’s comparative hawkishness. If this is indeed the case, the Fed’s status quo will likely be maintained and the future outlook for Fed interest rate increases could continue to be slow. This scenario is apt to weigh further on the US dollar. Additionally, a Clinton win would obviously preclude a Trump presidency, which would be good news for emerging markets targeted by Trump’s protectionist trade policies, including China and Mexico. In that event, those emerging market currencies would likely rebound against the US dollar, which could place additional pressure on the greenback.

One currency that could benefit from a Trump victory, just as the Mexican peso and Chinese yuan may suffer, is the Russian ruble. Aside from being an exceptionally high-yielding currency, the ruble could also benefit from Trump’s well-known affinity towards Russian President Vladimir Putin. In a Trump presidency, if Russia benefits and Mexico suffers, as could be expected, the ruble could rise as the peso falls.

The prospects of a progressively more hawkish Fed under a Trump administration has the potential to result in climbing interest rates and a strengthening US dollar. Together, these two forces could further pressure gold lower and potentially put an end to its recent recovery.

In contrast, a more dovish Clinton administration could foster a “lower-for-longer” interest rate outlook that would likely boost the appeal and price of gold. Additionally, in the event of any Clinton-driven downturn in equity markets, gold could also rise due to its traditional role as a safe-haven asset.

Trump has repeatedly stressed his position on energy issues. Specifically, he has spoken extensively about decreasing regulations on US energy production and increasing the country’s energy-producing capacity. If this indeed comes to be, higher oil production could likely add further to the current crude oil oversupply situation, thereby weighing even more on oil prices.

In a Clinton administration, however, crude oil prices could likely get a significant boost, as one of Clinton’s key objectives is a considerable shift towards developing renewable energy resources, most notably solar energy. As a result, US crude oil production would likely drop dramatically, cutting into the global oil supply and supporting crude oil prices. 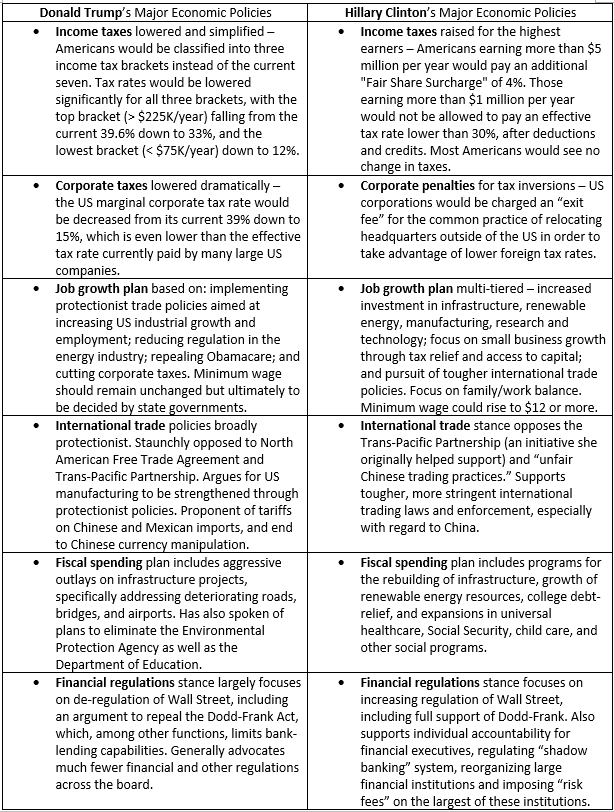