USD/CAD breaks down on surging oil, weaker US dollar

<p>USD/CAD extended its six-week-long plunge on Friday after mixed US employment data weighed on the US dollar and crude oil surged due to both the weaker dollar and resilient equity markets.</p>

USD/CAD extended its six-week-long plunge on Friday after mixed US employment data weighed on the US dollar and crude oil surged due to both the weaker dollar and resilient equity markets.

While Friday’s US non-farm payrolls report for February came out significantly better than expected at 242,000 jobs added vs. the expected 195,000, average wages unexpectedly declined, which provided another weak indication of inflation and renewed doubts over further Federal Reserve rate hikes in the near-term.

As a result, the US dollar was mostly weaker on Friday, giving a boost to commodities including crude oil, which has broken out above major resistance levels for both the West Texas Intermediate and Brent Crude benchmarks. Also propelling crude were resurgent global stock markets that helped improve the demand picture for oil, as well as a report on Friday from a major oil services firm that outlined a drop in U.S. oil rigs by 8 to a total of 392.

Put together, a moderately weaker US dollar and strengthening crude oil prices that boosted the oil-correlated Canadian dollar prompted USD/CAD to extend its long slide since mid-January. In the process of this slide, the currency pair has tentatively broken down below both a major support level at 1.3400 as well as the key 200-day moving average.

From a technical perspective, with crude oil having broken out above resistance and continued to recover since mid-February lows, and USD/CAD having broken down below the noted major support at 1.3400, the technical outlook for the currency pair has become increasingly bearish. In the event of sustained trading below 1.3400 and the noted 200-day moving average, the next major downside targets reside at the 1.3000 psychological level followed by the key 1.2800 support level. On any rebound back above 1.3400, further upside resistance can be found at the 1.3600 level. 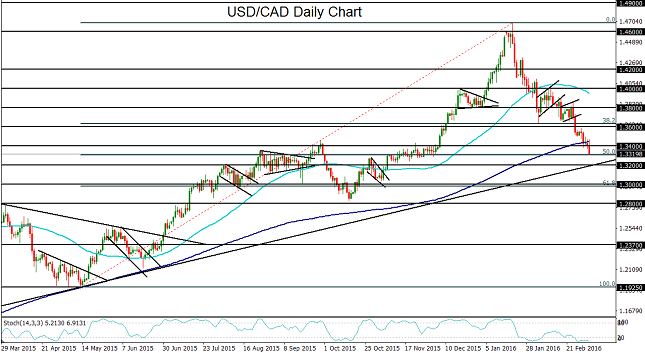