After spending Monday paring some of its losses from last week, USD/CAD renewed its plunge on Tuesday as crude oil rebounded due to hopes for an output restraint deal among oil-producing nations led by OPEC.

With Canada’s economy heavily reliant upon exports of crude oil and oil products, the Canadian dollar’s value generally rises and falls, but has primarily fallen as of late, with the movement of crude oil prices.

Prior to last week, Canada’s currency had been falling precipitously against the US dollar largely due to its correlation with crude oil, spurring a rapid rise for USD/CAD within the past several months. This rise reached its upside resistance target at 1.4600 before surging further to hit more than a 12-year high at 1.4688.

This rise was interrupted abruptly last week when the technically well-overbought currency pair made a sharp pullback from its highs as oil prices managed a modest rebound.

This week, although crude oil on Monday gave back a good portion of last week’s gains, prompting a bounce for USD/CAD, Tuesday saw a different turn of events. As noted above, hopes for a deal that could provide for coordinated restraint on oil output by both OPEC and non-OPEC nations, caused crude oil benchmarks to surge once again and USD/CAD to extend its recent pullback further towards 1.4000 on Tuesday.

Despite this talk of a possible output deal among oil-producing nations, an agreement of this nature should be exceptionally difficult to reach, given the political differences among many of these nations as well as the objective of all potential participants to protect and even expand market share. Furthermore, even if any semblance of a deal is reached, persistent concerns over waning global demand, particularly in China, could continue to pressure oil prices.

Based on a fundamentally bearish outlook for crude oil, USD/CAD’s current pullback, though significant, could well be limited. Without a bona fide recovery in crude oil prices, which continues to be unlikely, the Canadian dollar should remain challenged and pressured.

Currently, USD/CAD’s pullback has closely approached key support around the 1.4000 psychological level. Any turn to the upside on further weakness in crude oil could result in a move back up towards the original 1.4600 target. A breakout above the noted highs could then begin to target the 1.4900 resistance level. 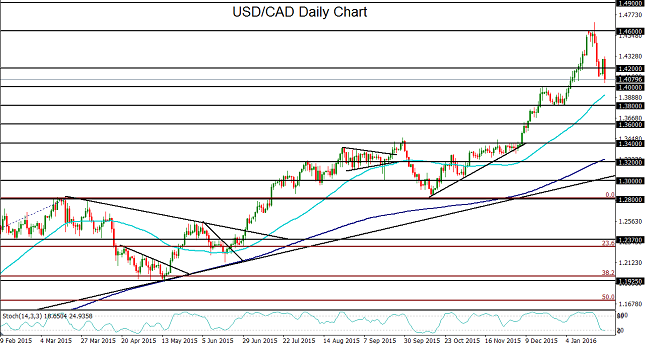