Traders are abuzz this morning with the "news" that Saudi Arabia, Russia, Qatar, and Venezuela have agreed to freeze oil output at the January’s levels, ostensibly in an effort to support oil prices. Speaking bluntly, this agreement (which is still conditional, as it depends on other countries supporting the move) is hardly a game-changer from a supply and demand perspective, as those countries were already producing at their maximum levels with no immediate plans to increase production anyway. As one analyst put it, it’s like promising not to drive your Ford Focus above 220km/hr; you couldn’t do it even if you wanted to.

That said, today’s news is the first meaningful sign of cooperation between Saudi Arabia and Russia, the world’s two largest oil producers. Saudi Oil Minister Ali Al-Naimi focused on the future implications of the agreement, stating that "The reason we agreed to a potential freeze of production is simply the beginning of a process [over next few months]. We don’t want significant gyrations in prices. We don’t want a reduction in supply. We want to meet demand. We want a stable oil price."

So far, traders have been more focused on the near-term economic implications of the agreement and not the potential for future cooperation among OPEC, Russia and other large producers. Indeed, oil (WTI) is falling sharply to sub-29.00 levels from 31.50 immediately after the announcement as traders see no immediate end to the current oversupply situation.

For most forex traders, the first place to look when oil prices move is at USD/CAD. The North American pair is rallying today, though perhaps not as dramatically as bulls would have hoped. Nonetheless, the pair is working on an (incomplete) Bullish Engulfing Candle* on the daily chart, signaling a shift from selling to buying pressure and potentially foreshadowing more strength in the coming days.

Meanwhile, the RSI indicator appears to have found a floor in the 40 region, and the failure to reach "oversold" territory on the latest pullback suggest that the longer-term uptrend is still intact. For bulls, the next hurdle to watch will be the 1.40 level: if rates can break above that barrier (especially if confirmed by continued weakness in oil), a move back toward mid-January levels near 1.4160 (50% Fibonacci retracement) or 1.4290 (61.8%) could be next. 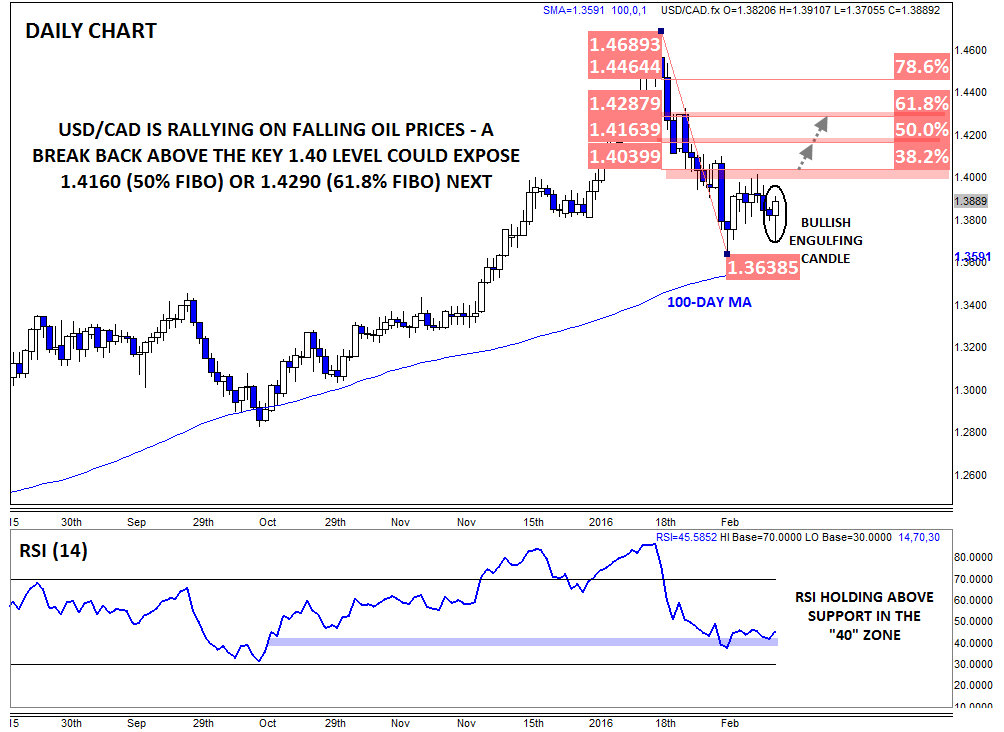