USD/CHF: Will the SNB match the ECB’s bold easing?

It’s been a quiet start to what promises to be an extremely active week for global traders. As of writing ahead of an all-too-early, post-daylight-savings-time US open, European equities are trading generally higher, bond yields are edging lower, oil is off by over 2% from Friday’s close, and the US dollar index is regaining some of last Thursday’s losses. In case you haven’t checked your calendar, this week will feature a number of top-tier central bank meetings including the latest updates from the Bank of Japan (tonight), Federal Reserve (Wednesday), and Swiss National Bank (Thursday), so market participants may be somewhat hesitant to put on large positions in the early part of the week.

One currency pair that will inevitably get swept up in the central bank crosswinds in USD/CHF. The Swiss franc surged in the wake of Thursday’s violent bullish reversal in the euro, which in turn was spurred along ECB President Mario Draghi’s comment that the central bank was likely done cutting interest rates. It remains to be seen whether that off-the-cuff blurb proves correct, but European central bank watchers will turn their attention the Alps this week, where the SNB will have to decide whether to follow in the ECB’s footsteps.

While Switzerland’s central bank usually moves in lockstep with their European counterparts, recent comments suggest that Swiss policymakers may be growing increasing uncomfortable with negative interest rates. In the words of SNB Chairman Jordan:

With extremely accommodative monetary policy already in place in Switzerland and franc relatively weak against the euro, many analysts expect that the SNB will not look to cut interest rates further on Thursday. Instead, the central bank may leave rates unchanged at -0.75% and attempt to "jawbone" the currency lower. Of course, if the franc were to strengthen further, the SNB has shown no qualms about intervening in the currency to put a lid on its appreciation, and the central bank could favor this more flexible approach to managing its currency in the short term.

Therefore, we could see a knee-jerk drop in USD/CHF if the SNB fails to "keep pace" with the ECB’s easing, but any near-term franc strength would likely be short-lived. On the other side of the coin, if the SNB surprises by the market by further cutting its main interest rate or otherwise easing policy, USD/CHF could rally through major psychological resistance at the parity (1.00) level as the Fed’s relatively hawkish policy becomes even more of an outlier among G10 central banks. 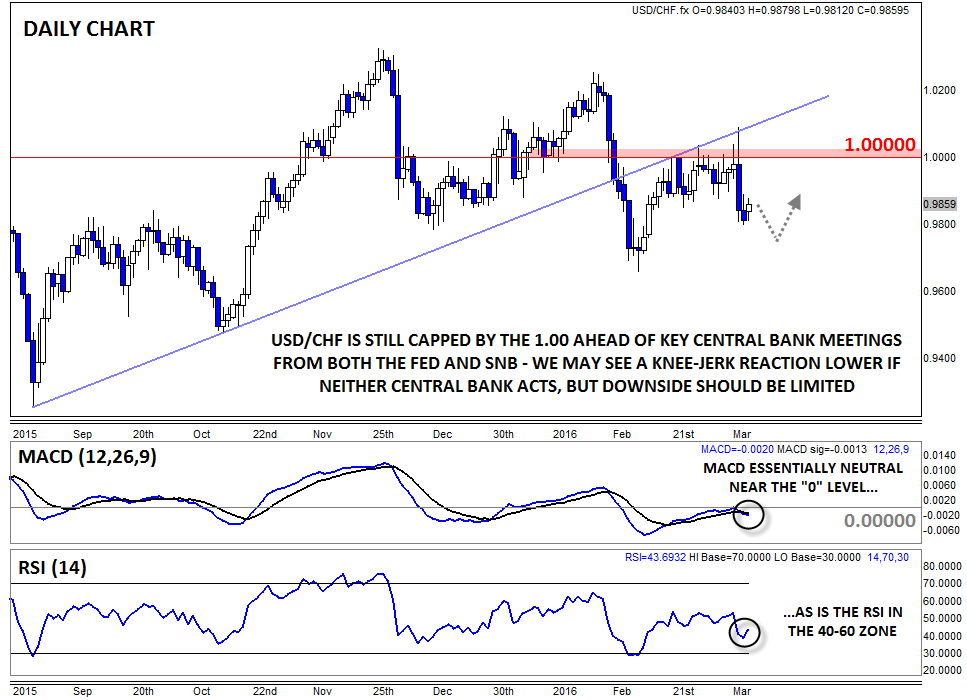