Although Trump’s highly charged speech was rather short on details with respect to fiscal policy plans, markets welcomed his more presidential tone, as well as his uncharacteristically conciliatory plea to Congress for unity in furthering the country’s agenda. As for the heavily anticipated promises of corporate tax reform and deregulation, these topics were both mentioned, but few details were offered aside from the comment that there would be a “big cut” in taxes. One detail that did stand out, however, was Trump’s request to Congress for $1 trillion that would be earmarked for spending on infrastructure.

Overall, the speech did little to provide any detailed clarity around Trump’s fiscal trajectory, but it did provide the markets with confidence that Trump was on track and more determined than ever to further his stated pro-growth, pro-spending agenda. An effect of this market confidence was significantly greater speculation that another rate hike by the Fed would come sooner rather than later. Of course, this heightened Fed speculation was also heavily-supported this week by increasingly hawkish comments from Fed officials. While the market-viewed likelihood of a March rate hike stood only in the high-teens and low 20’s last week, that probability rose to 35% on Tuesday and then surged to nearly 70% on Wednesday in the aftermath of Trump’s speech.

On this higher perceived likelihood of a March rate hike, the US dollar rose significantly both during Trump’s speech on Tuesday evening as well as on Wednesday. And as equity markets cheered Trump’s address to Congress, making sharp gains in the absence of any major concerns over his speech, gold and the yen fell out of favor as safe-haven assets, prompting a quick drop. The net effect of a strengthening dollar and weakening yen was a substantial boost for USD/JPY, which rebounded off the noted 111.50-area, matching early February’s lows to form a tentative double-bottoming pattern. Those 111.50-area lows are also around the 38% Fibonacci retracement of the sharp September-to-December uptrend.

Having just reached back up to the 114.00 level on Wednesday, which is also around the current location of its 50-day moving average, USD/JPY reached a key intermediate resistance level before paring its gains. In the event that the several Fed speakers on Friday continue to fuel hawkish speculation over a March rate hike, USD/JPY could break out and have significantly further to run. In that event, clear upside targets reside at the 116.00 and 118.00 resistance levels. 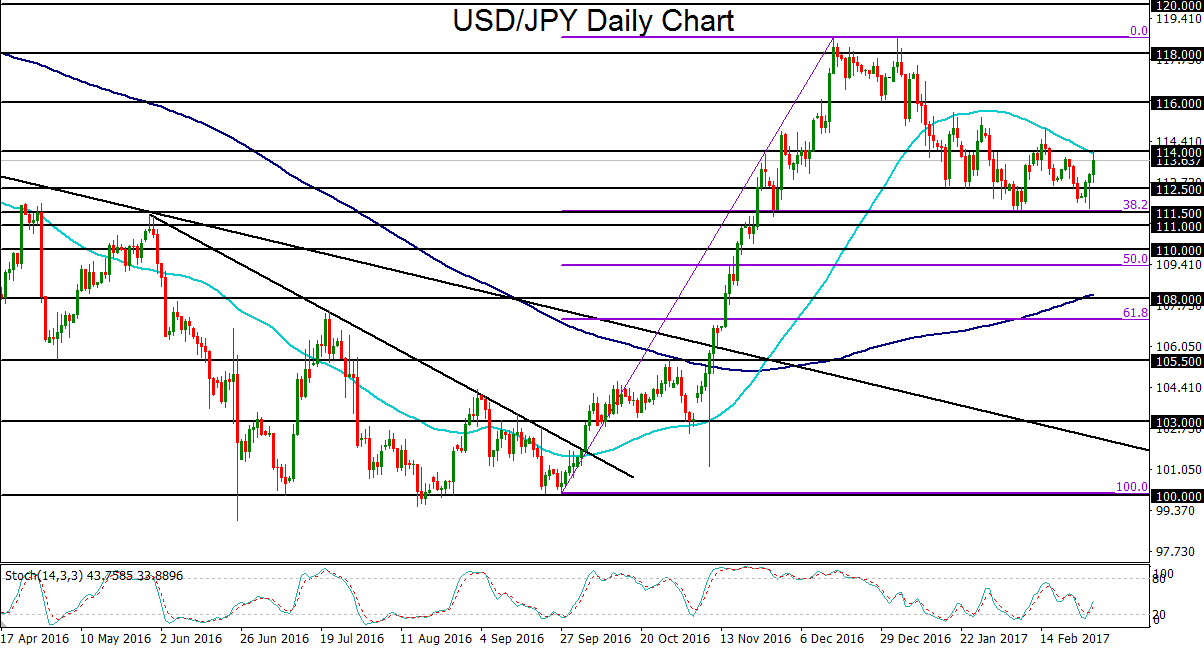