USD/JPY braces for Fed and Bank of Japan next week

<p>The European Central Bank’s (ECB) rate statement and press conference have come and gone with little in the way of concrete guidance for the euro. Aside from some dovish-leaning nuances, the ECB had little to say that has not already been said about low inflation and economic growth concerns. With the ECB out of the way, attention has now turned towards the potentially pivotal policy statements coming next week from both the US Federal Reserve and the Bank of Japan (BoJ).</p>

The European Central Bank’s (ECB) rate statement and press conference have come and gone with little in the way of concrete guidance for the euro. Aside from some dovish-leaning nuances, the ECB had little to say that has not already been said about low inflation and economic growth concerns. With the ECB out of the way, attention has now turned towards the potentially pivotal policy statements coming next week from both the US Federal Reserve and the Bank of Japan (BoJ).

The Fed is not expected to make any changes to interest rates next week, as the US central bank has generally become increasingly dovish since its rate hike in December, but will provide its current outlook on the common concerns of low inflation and economic growth risks. At the current time, Fed Fund futures are pricing-in only around a 2% probability of a rate hike next week, although the probability of any rate hike by the end of the year increases dramatically to nearly 66%. Largely due to the Fed’s increasing dovishness since December, the US dollar has been weakening steadily for the past few months, despite the prevalence of increasing dovishness across most other major central banks as well.

On the opposite side of the globe, the Bank of Japan has persistently implemented further easing measures, but the results of those measures have largely been disappointing, especially with regard to the strengthening yen. The Japanese central bank’s experiment with negative interest rates a few months ago has not been effective, and there are concerns that the BoJ may soon be running out of tools. The Japanese government has stated that it would take measures to intervene and ward off further yen strength, but the effectiveness of its tactics to do so remain questionable. Next week’s BoJ policy meeting could result in further easing, but the yen could also potentially shrug it off as it has in the past.

Within this framework, the USD/JPY currency pair has been entrenched in an intermittently plunging downtrend as the dollar has declined and the yen has surged since the end of last year. A few of those sharp slides were due to yen strengthening in its role as a safe haven currency during times of market turmoil and volatility, especially earlier in the year.

Most recently, USD/JPY fell to a major downside target at 108.00, but has been unable to break down below that key support level as of yet. This week’s rebound for the currency pair brought price back up to approach the 110.00 psychological level before retreating on Thursday. In the run-up to the two major central bank decisions next week, if USD/JPY continues to trade under the 110.00 resistance level, any breakdown below the noted 108.00 support could target the next major support objective at 105.00. 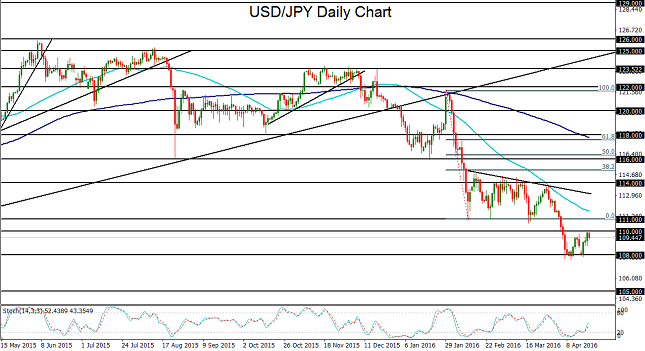