USD/JPY could resume bear trend if US CPI disappoints

The US dollar has enjoyed a rare recovery over the past couple of days. This is most likely due to profit-taking from severally oversold levels, for US macro data so far in the week has been anything but positive. So far this week, the NFIB Small Business Index, Import Prices, Retail Sales and Producer Price Index (both headline and core readings) have all disappointed expectations. On top of this, inflation data from the UK, exports data from China and employment figures from Australia have all topped expectations. So you would have thought that the USD/CNY would fall while the GBP/USD and AUD/USD rally. Well, the USD/CNY has actually rallied, while the GBP/USD’s bounce from earlier in the week was short-lived, undeniably due to raised concerns over Brexit risks. The AUD/USD however has been more consistent with the data as it has actually risen. Not that the AUD or the CNY are in the Dollar Index, but the buck has nevertheless risen over the past few days against a basket of foreign currencies.  The relief could well be short-lived however if today’s US Consumer Price Index measure of inflation for the month of March comes out weaker than expected at 13:30 BST (08:30 ET). The headline and core CPI are both expected to print +0.2% month-over-month readings each. In February, the CPI had fallen 0.2% while core CPI had increased 0.3%. For the dollar to move significantly in one or the other direction, the actual numbers will need to deviate significantly from these expectations. Given the recent trend of soft US numbers, another disappointing print here could see the dollar resume its downward move.

Among the USD pairs, the USD/JPY could be an interesting one to watch today. This pair’s daily chart shows a growing downward trend. The USD/JPY has been putting in several lower lows and lower highs since peaking at 125 last year. In the first half of this week however it has bounced off the 107.70 support level, possibly due to profit taking ahead of today’s US CPI data and after the RSI had signalled severe oversold conditions, as it dipped below 30. The USD/JPY has consequently climbed back above short-term resistance at 109.00. However the trend hasn’t changed yet. As the chart shows, price is contained within the bearish channel and still holds below the psychological level of 110, as well as key resistance at the 110.70-111.10 zone. What’s more, the moving averages are all pointing lower, including the 200-day SMA. This confirms that the long-term trend has turned bearish. For that reason, the rallies could be short-lived going forward.

Indeed, today marks the third day of the bounce in USD/JPY. Usually, bear market rallies last around three days and if today’s US inflation figures disappoint expectations then the sellers may re-emerge. In any case, for as long as the key resistance in the 110.70-111.10 area holds, the bears will remain in control. As such, the USD/JPY’s path of least resistance continues to remain to the downside. If support at 109.00 breaks down, then a revisit of 107.70 will become highly likely. Indeed, the USD/JPY could even drop to test the long-term resistance-turned-support at 105.35 or the next psychological level of 105.00 before it makes its next move. 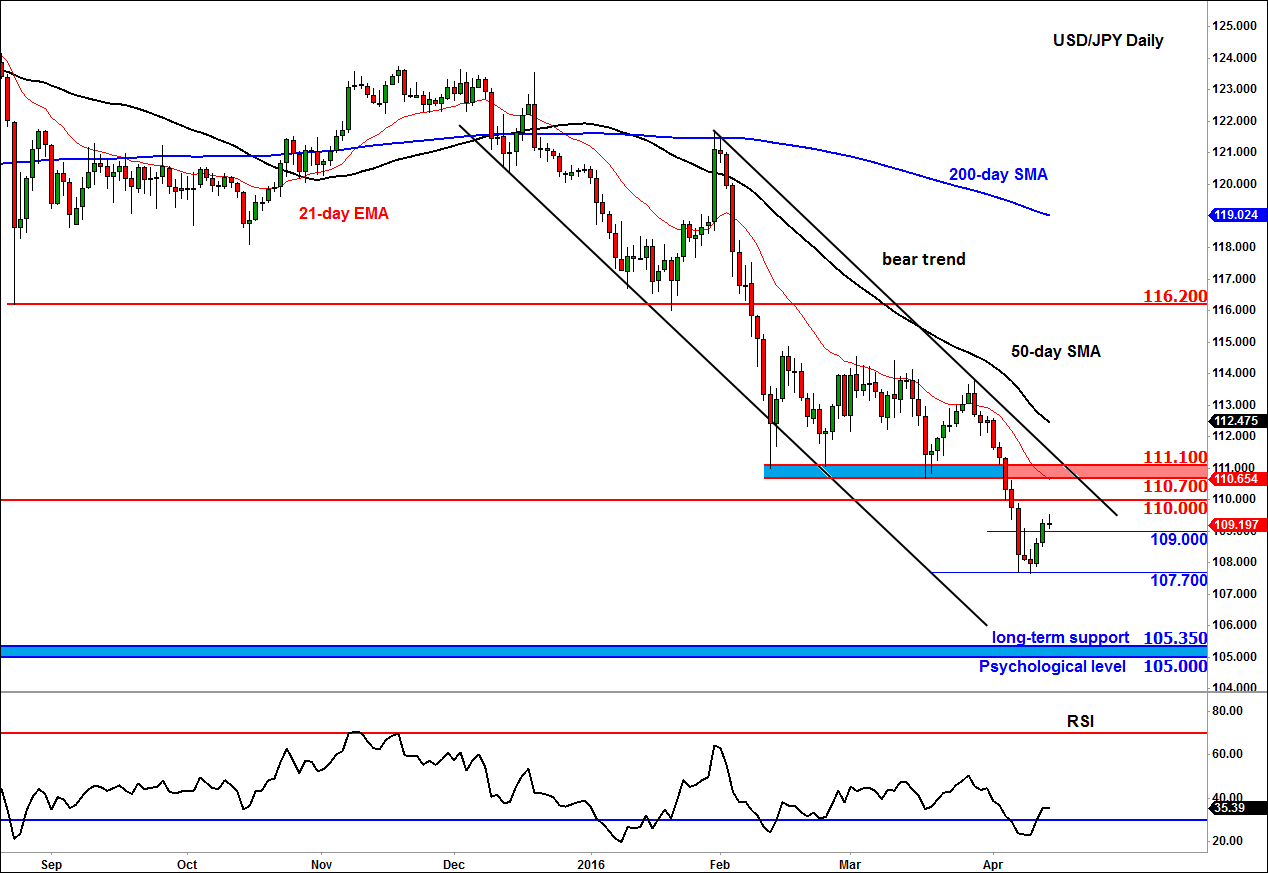