Share:
While the US dollar has continued to display a marked pullback since the beginning of the new year, fundamentals remain supportive of the dollar going forward in view of the outlook for US interest rates. This is especially the case since US President Trump has embarked on an ambitious course of action to fulfill promises he made as a presidential candidate, and his fiscal spending plan is widely expected to boost inflation and trigger higher interest rates. The US Federal Reserve, which next meets a week from now, is not expected to hike rates in February but should be under increasing pressure to do so as Trump’s anticipated spending programs come into play. In turn, dollar demand is highly likely to rise along with interest rates.

As for the yen, the Japanese currency has generally been on the rebound since the beginning of the year, just as the dollar has been weakening. Part of this yen rebound can be attributed to the currency’s safe-haven attributes, as market uncertainty ahead of Trump’s January 20 inauguration drove some demand for the perceived safety of the yen. That environment has changed after Trump’s inauguration, however, as market complacency is at high levels and risk assets like equities are in exceptionally high demand. On Wednesday, the Dow passed the eagerly anticipated 20,000 mark for the first time ever, and the S&P 500 was on track soon to rise above 2300. Generally, equity market dips have been bought aggressively as of late, which leaves little demand for safe-haven assets like the yen.

In the midst of this generally positive outlook for the dollar and generally negative outlook for the yen, USD/JPY has tentatively formed a double-bottoming pattern at a key support level around 112.50. This support level is also around the 38% Fibonacci retracement of the bullish run from early November to the mid-December peak. Could USD/JPY use the current support level as a launching pad to stage a recovery from this month’s pullback? If so, the currency pair would obviously need to continue trading above 112.50. Any breakdown below that level would confirm a continuation of the pullback. In the event of a continued rebound off 112.50, a move above 114.00 would open the way back up to target the 118.00-area resistance highs. 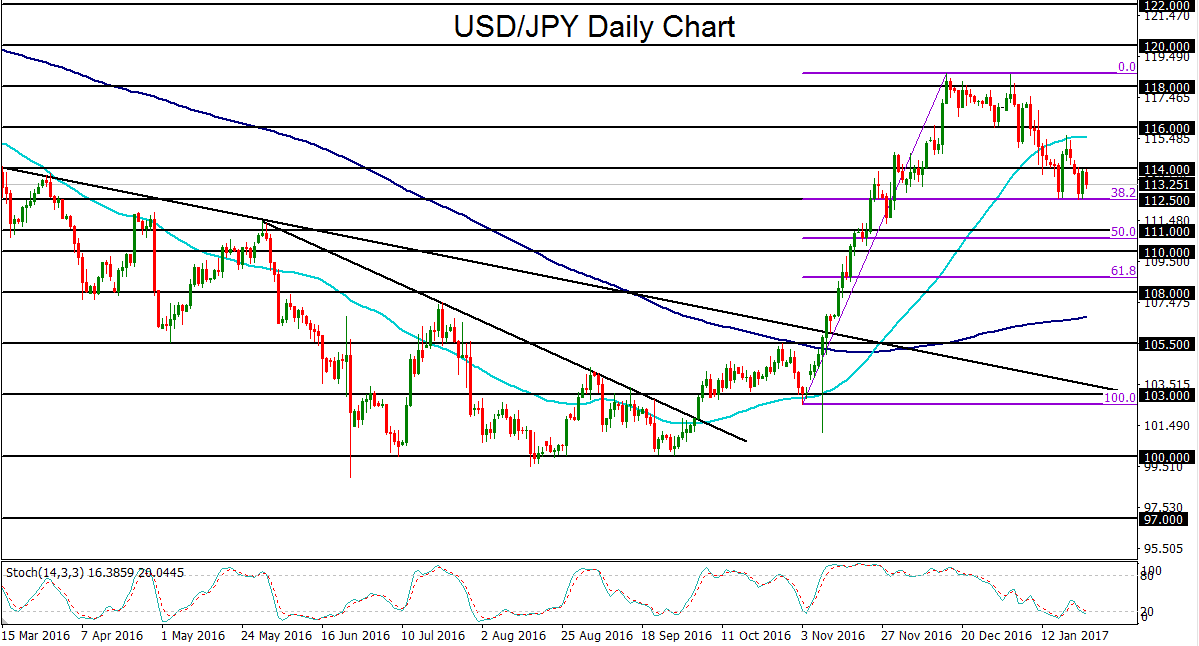