USD/JPY forms double-bottom, but is the plunge over?

USD/JPY rose in afternoon trading on Thursday as equity markets extended the previous day’s reversal rebound on higher crude oil prices. Despite a drop in crude oil early on Thursday, prices recovered moderately after it was reported that major OPEC countries and Russia agreed to meet in March to discuss a proposed oil output cap at January’s levels. This boosted both the West Texas Intermediate and Brent Crude benchmarks, which helped to lift slumping equity markets. In turn, as equities rose, so did the closely correlated USD/JPY currency pair, which extended its climb off a clear double-bottom pattern on the daily chart.

With global stock market volatility having become the norm since the beginning of the year, USD/JPY has seen precipitous declines recently, especially since the beginning of February when the US dollar also depreciated substantially. Those declines culminated in an early February low slightly below 111.00, before a relief rebound occurred that tracked stabilizing equity markets. Earlier this week, the currency pair once again plunged to hit a low around the 111.00 level as crude oil uncertainty resumed its grip on global stock markets. This re-test of 111.00 created a potential double-bottom chart pattern that could presage at least a temporary bottoming of USD/JPY.

Possibly supporting this view is the ever-present potential for a currency intervention by the Bank of Japan, with the aim of curbing unwanted appreciation of the yen. With regard to this, two unknowns persistently remain: 1) around what level would the Bank of Japan intervene? And 2) would intervention really have any lasting impact on keeping the Japanese currency down in the face of continuing market volatility that boosts the safe haven yen?

These questions remain to be answered, but what is currently known is that financial markets continue to sustain a generally fearful environment, and the recent trend for USD/JPY has been unmistakably to the downside. Therefore, barring any major stock market recovery or drastic Bank of Japan intervention, USD/JPY remains pressured. If this continues to be the case, the current double-bottom pattern could simply be a moment of respite within a continuing slide.

Any sustained breakdown below the noted 111.00-area lows would confirm a continuation of the downtrend. In that event, the next major targets to the downside reside at the 110.00 and then 108.00 support objectives. 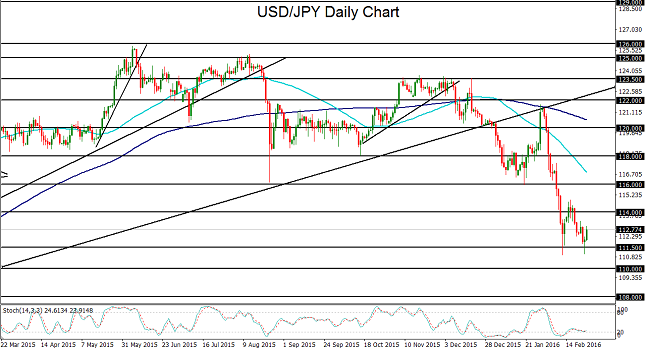