Share:
USD/JPY continued on Thursday to consolidate its recent losses and fluctuate in a tight range right around the key 100.00 psychological support level. Mixed signals from Wednesday’s release of July’s FOMC meeting minutes that highlighted a divided Fed have contributed to a rather indeterminate directional bias for the currency pair. Despite those mixed signals, however, markets have appeared to make the tentative conclusion that a Fed rate hike is not imminent and that this year may not see any Fed movement at all. This view has been manifested in the US dollar, which continues to fall, as gold remains supported and US equities trade near recent record highs.

As the dollar has come under increasing pressure, the Japanese yen side of the currency pair has remained exceptionally strong, trading near long-term highs against its major currency rivals. Late last month, the yen strengthened further when the Bank of Japan (BoJ) disappointed investors and failed to cooperate with Japanese Prime Minister Shinzo Abe’s aggressive fiscal stimulus proposal by refraining from pushing further into negative interest rate territory or increasing its bond-purchase program. Additionally, the perception remains that the BoJ may be running out of monetary policy options in its hopes of propping up the Japanese economy and weakening its currency.

From a technical perspective, USD/JPY has continued to stagnate around the major 100.00 psychological support level, as mentioned, and has done so for the past two days in the absence of any clear catalyst for a significant move. The past four weeks have seen the currency pair drop precipitously from its July high just below 108.00 resistance down to this key 100.00 level, which sits just above the late-June post-Brexit low around 99.00. 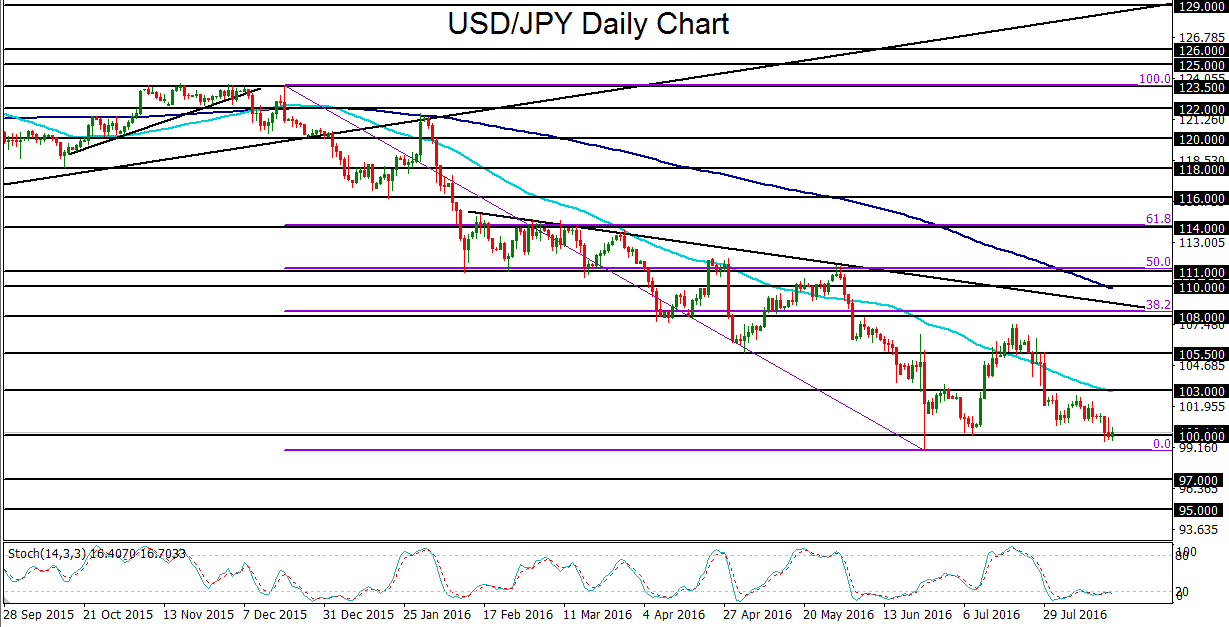