USD/JPY tumbled on Thursday to dip briefly under major support around the key 111.00 level, the area of February’s double-bottom lows, and established a new long-term low in the process. This drop was driven primarily by Wednesday’s pivotal Fed statement on monetary policy, and the clearly dovish undertones that emanated from the Fed’s comments. Although it was already widely expected that interest rates would be kept unchanged instead of raised, strikingly dovish remarks that shifted expectations from four rate hikes in 2016 to two prompted the dollar to plunge on both Wednesday afternoon and Thursday morning.

The Fed’s announcement followed only a day after the Bank of Japan (BOJ) opted to keep interest rates on hold instead of cutting rates further into negative territory. As a result, the yen had already surged against the dollar on Tuesday, pushing USD/JPY well below its key 114.00-area resistance level. With the further slide on Wednesday and Thursday, the currency pair has extended its fall back down to major support.

After USD/JPY plummeted to a 111.00-area low in early February, the currency pair began a prolonged consolidation near its lows, which at one point in late February retested 111.00 to form the noted double-bottom chart pattern. Meanwhile, on the higher end of the consolidation, price formed a descending trend line that has served as the upper border of the trading range. Overall, this upper border combined with the lower horizontal border at the 111.00 double-bottom lows have formed a clear descending triangle pattern.

With both the BOJ and Fed meetings having weighed heavily on USD/JPY, the currency pair is once again testing the lows of this triangle pattern, and has reached an important bearish technical juncture. With any further downside momentum that prompts a sustained breakdown below this triangle, the next major downside targets are at the key 110.00 and then 108.00 support objectives. 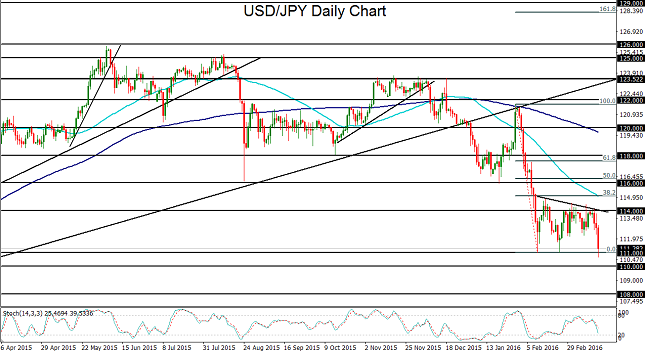