<p>Ahead of tomorrow’s highly-anticipated NFP meeting, sentiment toward the US dollar could hardly be more pessimistic. The world’s reserve currency just saw its biggest 2-day drop in nearly a year and has now given up all of its gains from the start of the year. As <a href="http://www.forex.com/post?SDN=6fc09a3d-a187-4ff4-a563-7ced56fee52a&Pa=20db1fa6-e674-420c-9a87-2ee29261d638">we noted yesterday</a>, the move has been driven primarily by fading expectations of <i>any</i> rate hike from the Federal Reserve this year, and the 10-year US treasury bond yield has dropped to a 1-year low below the 1.90% as a result.</p>

Ahead of tomorrow’s highly-anticipated NFP meeting, sentiment toward the US dollar could hardly be more pessimistic. The world’s reserve currency just saw its biggest 2-day drop in nearly a year and has now given up all of its gains from the start of the year. As we noted yesterday, the move has been driven primarily by fading expectations of any rate hike from the Federal Reserve this year, and the 10-year US treasury bond yield has dropped to a 1-year low below the 1.90% as a result.

With that backdrop, it’s no surprise that the US dollar has been clobbered in this week’s trade. The dollar index, which measures the strength of the world’s reserve currency against six of its biggest rivals, has dropped all the way down to test its 200-day moving average in the mid-96.00s while its biggest component, EUR/USD, has rocketed to a 3-month high around 1.1200.

From a technical pattern perspective, the current drop in the dollar index has created a violent breakdown from the previous rising wedge pattern. Despite the seemingly bullish name, this price action pattern shows that buyers are struggling to push the price higher on each subsequent swing. It is a classic sign of waning buying pressure and provided a big warning sign for traders who were skeptical of the dollar’s rally.

Meanwhile, the secondary indicators have also taken a turn for the worse over the last few days. For its part, the MACD indicator has rolled over to cross below both its signal line and the "0" level, signaling a big shift to outright bearish momentum. Meanwhile, the RSI indicator has also broken below its recent range and is now definitively in bearish territory.

Of course, the most important question for traders is "what happens next?" In the short-term, a combination of fundamental and technical factors will drive the currency. Namely, tomorrow’s NFP report will help determine whether the dollar index can hold above 200-day MA support; if that support level holds, an oversold bounce back into the upper-90.00s is definitely possible, though the currency may still have trouble clearing strong resistance in the 100.00 zone given fading interest rate hike expectations. Meanwhile, a disappointing NFP report could drive the dollar through 200-day support down toward the 61.8% retracement of the August-December rally at 95.60 (not shown) or lower as we move through this month. 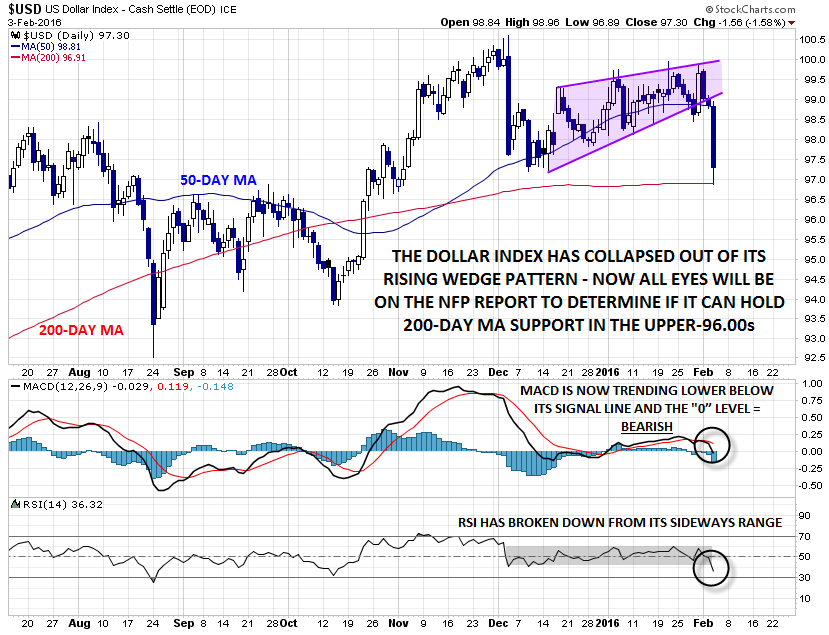 Source: Stockcharts.com, FOREX.com. Note that this chart is only updated as of yesterday’s close; the dollar index is trading down near 96.60 as of writing.