USD/CAD breaking lower ahead of BOC

Given the Bank of Canada’s upcoming meeting, the focus will be on the USD/CAD, which fell to a new 2017 low at the end of last week.

North Korea tensions have again dominated the agenda at the start of this week and will continue to remain a major obstacle facing risk-sensitive assets in the near-term. The economic calendar is packed with data and central bank meetings this week, but the market’s attention will still remain on headlines coming out of Pyongyang. They key event is likely to be the European Central Bank’s rate decision on Thursday, although the Bank of Canada could also cause sharp moves in the Canadian dollar on Wednesday. As far as today’s session is concerned, there will be some second-tier US economic data in the afternoon as well as speeches from Fed members Brainard, Kashkari and Kaplan. Earlier in the day we had some weaker than expected data from Europe. The UK services PMI came in at 53.2 compared to 53.5 expected, while the Eurozone PMI was revised lower and retail sales in the single currency block printed -0.3% month-over-month. Overnight, the Reserve Bank of Australia decided to keep its monetary policy unchanged in a widely expected move.

Meanwhile North American market participants will be coming back today after a long weekend break. Given the Bank of Canada’s upcoming meeting, the focus will be on the USD/CAD, which fell to a new 2017 low at the end of last week. The BoC has already turned hawkish thanks to improvement in Canadian data, as underscored by those stronger than expected GDP figures released on Friday. At this meeting, the BOC is widely expected to keep rates unchanged but any further hawkish comments could see the Canadian dollar surge further higher. The monthly employment report from Canada will be released this Friday and if we see further improvement in the jobs market then this could provide additional boost for the CAD. Meanwhile the US dollar still remains largely out of favour owing to the soft patch in US data and Donald trump’s inability to pass through his promised tax cuts and fiscal spending yet. Consequently, the USD/CAD could be on the brink of further falls.

Indeed, with the USD/CAD breaking below key support at 1.2460 – which was also the 2016 low – the path of least resistance is clearly to the downside now. We will hold a bearish view on this pair unless price climbs above 1.2500 area, and the bearish idea would become completely invalid upon a rally above the last swing high at 1.2660. On the downside, the next bearish objectives would be the Fibonacci extension levels at 1.2315 (127.2%) and 1.2192 (161.8%), followed by the psychologically-important 1.2000 handle. 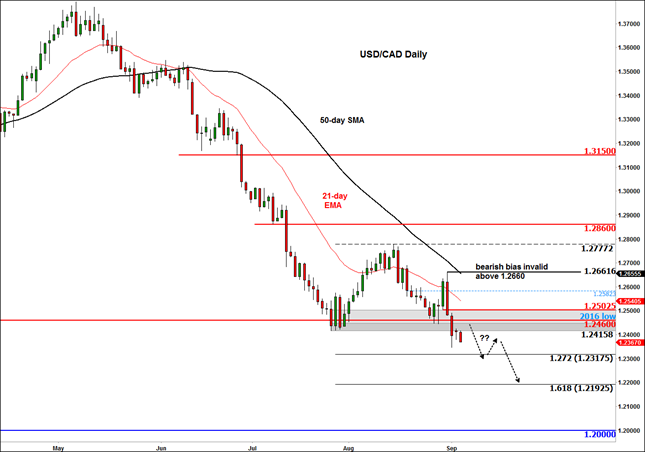