The USD/CAD turned sharply higher as oil prices sank on the back of the latest US oil inventories report.

The USD/CAD turned sharply higher as oil prices sank on the back of the latest US oil inventories report. According to the EIA, US oil stocks rose by 3.3 million barrels last week. This was an unexpected build and ended an eight-week run of drawdowns. Oil market bulls were already disappointed by the lack of a bolder plan by the OPEC to reduce excess supply, and this was the last thing they wanted to see. For the bears, though, it was the perfect news. As oil tanked, so too did the Canadian dollar, as crude is the nation’s number one export commodity. As a result, the USD/CAD turned sharply higher. But with other commodity currencies holding their own much better at the moment and the US dollar remaining largely out of favour, the bounce in the USD/CAD could be short-lived.

As a result, we are on the lookout for a potential reversal pattern to unfold, ideally around key resistance levels. One such area we are monitoring closely is between 1.3575 and 1.3600. Previously this area was support, and the subsequent breakdown has left this area exposed for a potential re-test. If the USD/CAD does get there but instead of turning lower, breaks cleanly above 1.3600, then this would invalidate the bearish outlook in our view. In fact it would be quite bullish.

Meanwhile in terms of support, the first level for the USD/CAD bulls to defend is the high from Tuesday that was taken out today, around 1.3485. A closing break below this level would bearish. The next key support would be around 1.3330, which corresponds to the point of origin of the last breakout and comes in around the 200-day average. Massive level this one is. I am expecting to get at least a bounce from this level if the USD/CAD collapses (rather than drift) into it. 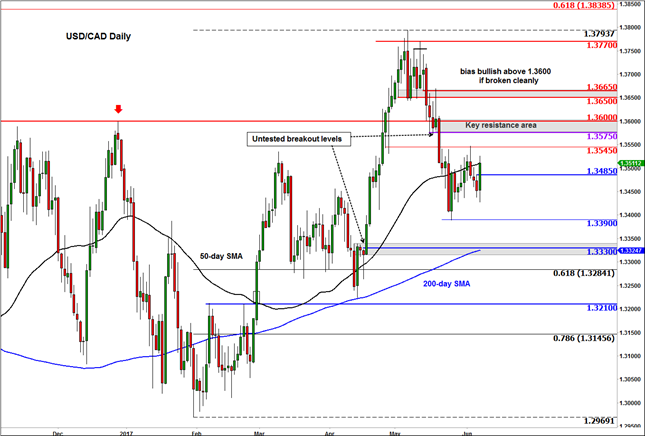