In recent days we have seen the dollar’s bullish trend gain momentum against the G10 currencies. Investors appear to be expanding their bullish bets on the greenback amid rising expectations that Donald Trump’s reputation will prevent him to become the next US president.

In recent days we have seen the dollar’s bullish trend gain momentum against the G10 currencies. Investors appear to be expanding their bullish bets on the greenback amid rising expectations that Donald Trump’s reputation will prevent him to become the next US president. Trump is widely deemed to be dollar-negative, while a Clinton victory is regarded to be positive for the dollar. In the absence of a shock victory for Trump, the Federal Reserve will most likely raise interest rates in December, thanks to improving data in the US. Meanwhile almost every other major central bank except the Fed will probably maintain their dovish stance for some time yet, including the BoE, BoJ, ECB and SNB. The latter has had a very tough time fighting deflation in Switzerland. Even though interest rates in Switzerland have been cut to -0.75%, the perceived safe-haven status of the currency means investors have been less keen to move their funds out of Switzerland. But now that could be about to change.

Yesterday we wrote about the dollar’s growing strength and analysed in detail the EUR/USD and the Dollar Index. The EUR/USD looked poised for a breakdown while the Dollar Index had already made its move, breaking its own downtrend. Now the USD/CHF is another dollar pair making its move above a key resistance area.

As can be seen from the chart, the USD/CHF has been stuck in a lengthy consolidation pattern for the best part of this year. However, since the start of May, it has been trending higher, albeit with really deep retracements. Nevertheless, it looks like the Swissy made its low when an attempt to move decisively below the prior swing low and psychologically-important level of 0.9500 failed. That false breakdown caused the shorts to start unwinding their positions and the buyers have apparently been stepping in to buy the dips. The USD/CHF broke its prior swing high around 0.9800 following that false break reversal pattern and thus the market structure of lower highs was violated. Since then, at least 4 higher lows have been established.

Today, the USD/CHF has broken above its bearish trend line and resistance at 0.9840. Assuming that this is a sustainable break, we could see a nice up move towards the area I have shaded in red on the chart: 0.9955-1.0000. The lower end of this range was the last swing high while the upper end is where the 61.8% Fibonacci retracement level against the 2015 high meets the psychologically-important parity level (1.0000).

The behaviour of price action is clearly bullish at the moment and I wouldn’t be surprised if the Swissy were to even climb north of parity over time. At this stage, my bullish technical outlook on this pair would become invalid upon the formation of a lower low beneath 0.9640. However, any move back below the broken 0.9840 resistance level should also be a sign for concern for bullish speculators. 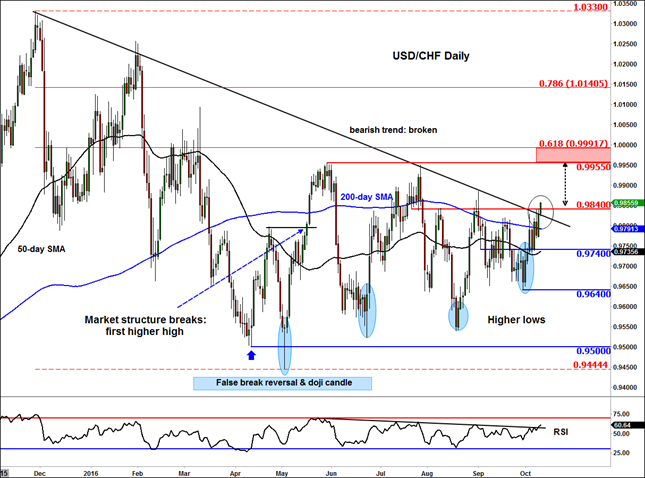