The USD/CHF spent the whole of last week consolidating in a very tight range around that psychologically-important 1.00 handle. The consolidation suggests its coiling for a potentially big move. In the short-term, it all depends on whether we will see a decisive break of the 0.9960/70 support area OR the 1.0020/27 resistance area. Given the overall bullish market structure, we think that the move will more likely be to the upside rather than the downside. Even if it breaks lower, the potential sell-off will probably be limited.

Why do we think the USD/CHF appears more bullish?  Well, for a start the 200-day moving average is pointing higher and price is currently above it. This is one of the most objective ways of telling a trend. But even more important is the current structure of price. We can clearly observe from the chart that the USD/CHF has formed a higher high and a higher low relative to its previous swing points. Granted, one can argue that it may have created a false breakout or a double top reversal pattern around the 1.0330 resistance level, which is bearish. Furthermore, the bears could argue that price has broken the last intermediate low at 1.0020, which represents a break in market structure and is therefore bearish. BUT the bulls would point to the fact that the last significant swing low is all the way down at 0.9550, meaning that so long as this level holds, the long-term technical outlook would not be bearish.

If we assume that the long-term trend is not bearish, and focus in the more immediate term, then it is plain to see that the key battle ground is around parity (1.00). As the bulls and bears fight it out here, conservative traders can wait and enjoy the spectacle from the side-lines. Once it becomes clear which group of market participants are winning this battle then that is when conservative traders can step in and take advantage of the potential ride in that direction. Obviously breakouts can and do fail from time to time, which means risk management (stop loss, position size and etc.) should never be forgotten even when there is strong conviction behind a trade. After all, it is all about probabilities in this beautiful and risky game. 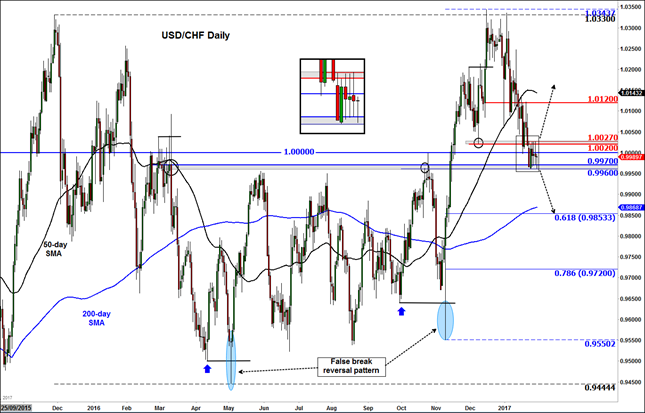