USD/CNH could hit 7.00 with Chinese GDP in focus

Sentiment towards China continues to deteriorate. The number one worry for investors is the slowing down of Chinese economic growth owing to the ongoing trade dispute between China and the US.

Sentiment towards China continues to deteriorate. The number one worry for investors is the slowing down of Chinese economic growth owing to the ongoing trade dispute between China and the US. These concerns are reflected in Chinese stock markets, with the Shanghai Composite index closing down almost 3.0% overnight after hitting its lowest level since November 2014. Investors are growing concerned over possible capital outflows from China. So, the renminbi is coming under pressure as well as the stock markets.

Indeed, the Chinese currency is threatening to drop to Rmb7 against the dollar, which was last hit during the financial crisis in 2008. The weakness of the yuan was is also because of introduction of various stimulus measures by Chinese authorities in recent months. Investors expect the loosening measures to continue until at least the trade dispute with the US is resolved. Thus the pressure is likely to remain on the renminbi for a while yet, especially if the Chinese GDP comes in weaker than expected in the early hours of Friday.

While the onshore renminbi (CNY) fell to a 21-month low, the offshore renminbi (CNH) meanwhile is yet to test the low it hit in August. Nevertheless, the CNH is coming under pressure again and this has lifted the USD/CNH pair above last week’s high. And the way price action is shaping up – with price showing a bullish consolidation pattern – and given the breakout in the USD/CNY, the USD/CNH could be about to pop higher, too.

In fact, the USD/CNH has already climbed out of its triangle pattern, so the next objective would be the liquidity resting above the August high at 6.9590. The December 2016 high comes in at 6.9860, followed by the key psychological hurdle at 7.0000 next. Meanwhile in terms of support, the key level that needs to hold now is at 6.9300, the high from the day before. Additional support comes in at 6.8970, which has been a pivotal level in the past.

But if the most recent low prior to the latest rally at 6.8675 breaks then this could be a bearish development in the short-term outlook and could lead to a potential breakdown all the way to the next key support at 6.7300 next. 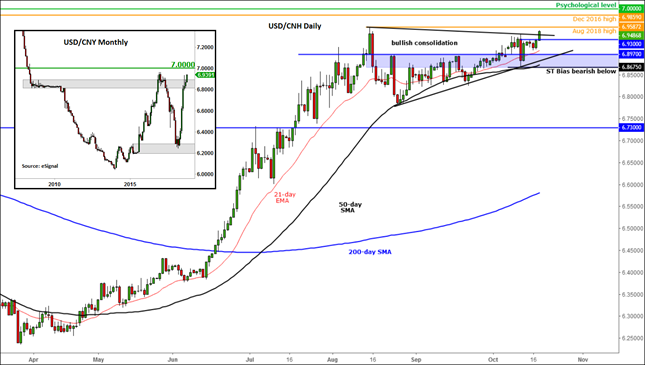