The Norwegian Krone’s dire performance over the past several months has puzzled many market watchers, who argue that the Scandinavian currency is undervalued for many reasons.

The Norwegian Krone’s dire performance over the past several months has puzzled many market watchers, who argue that the Scandinavian currency is undervalued for many reasons. After all, Norway’s solid economic performance continued in the third quarter with GDP expanding 0.7 per cent. This compares favourably against other developed economies including the Eurozone, where expansion has been much weaker, and even the US, where growth has slowed down to below 2 per cent.

More to the point, the country’s central bank has been the sole hawk among dovish central banks elsewhere.  The Norges Bank has raised interest rates four times in 2019, although in October it decided to keep policy unchanged at 1.5% as expected. The Bank noted then that “global uncertainty persists and interest rates abroad are very low,” but at the same time, “the weak krone may result in higher inflation ahead.”  Governor Øystein Olsen said that their “current assessment of the outlook and balance of risks suggests that the policy rate will most likely remain at the present level in the coming period.” So, the Norges Bank has not exactly turned dovish. The bank’s neutral stance should help limit the downside for the krone going forward.

Meanwhile with prices of crude oil, Norway’s main export, stabilising again of late, the krone may, after all, be able to rise from the ashes in the weeks ahead, particularly if foreign central banks signal further rate cuts are on the horizon. 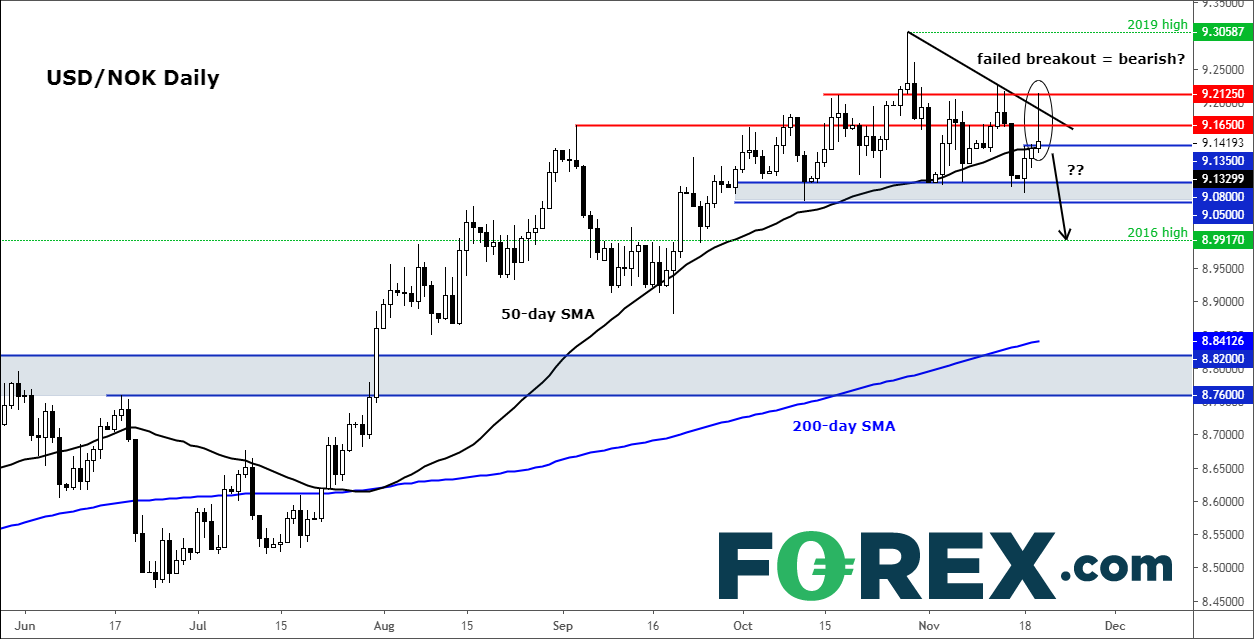 From a technical point of view, the USD/NOK has put in a few lower highs of late suggesting that the bears are perhaps finally beginning to exert some pressure on rates. So far, though, key support areas are still intact, so more work is needed from the bears before the tide potentially turns against the bulls. Still, today’s price action has been very interesting as the bulls’ earlier attempt at pushing rates above a short-term bearish trend failed. Although I will stop short of saying that this is the clearest sign yet that the trend is turning lower, it is nonetheless very interesting to observe. What the bears would like to see now is, first and foremost, a closing break below short-term support at 9.1350, followed by a breakdown below old lows in the region between 0.9050 to 0.9080 next. If seen, that would be a solid bearish development.