USD/RUB back to pre-invasion levels; watch USD/PLN and USD/HUF

Eastern European EM pairs may be a good alternative to USD/RUB for the short-term trader.

Yesterday, Ukraine President Zelensky said that if a security guarantee system works out, then Ukraine would agree to neutral status and would not have foreign military bases within its borders. In addition, Russia said that Ukraine can still join the EU, just not NATO.  As a result of the positive talks, Russia agreed to pullback their military operations near Kyiv.  There has also been talk of paying Rubles for natural gas that Germany receives from Russia.  Although this was immediately rejected by Germany, Russia is still trying to negotiate a path towards a payment in Rubles.  As a result of the positive talks between the two sides regarding the war, along with the possibility of receiving payment in Rubles for gas, USD/RUB has moved lower and is back towards levels not seen since before the invasion date. 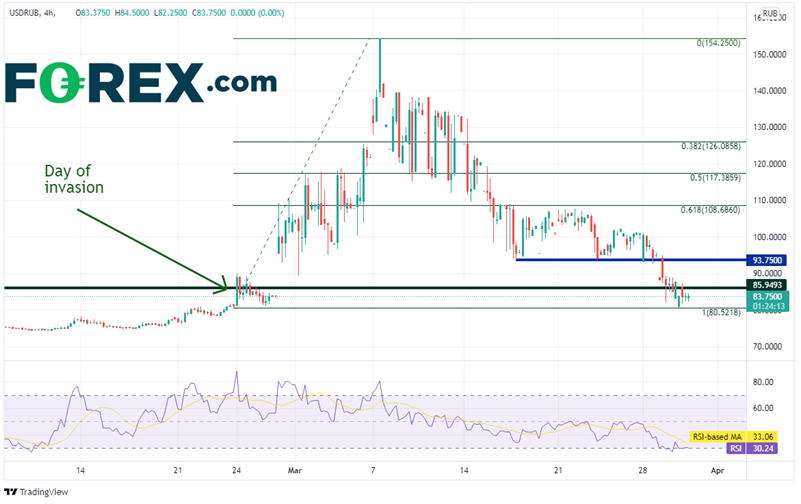 As we had discussed earlier in March, USD/RUB had a high correlation to some of the Eastern European Emerging Market currency pairs, such as the USD/PLN and USD/HUF. On a shorter, 240-minute timeframe, the correlation between USD/RUB and USD/PLN has been in and out of favor for the last 2 weeks.  However, the current correlation coefficient between the 2 pairs is +0.88.  A correlation of +1.00 means there is a perfect positive correlation and that the 2 pairs move in the same direction 100% of the time. Any reading above +0.80 is considered strong.  USD/PLN hasn’t quite reached the breakout point on the day of the invasion at 4.0505.  Horizontal support between the breakout level and current levels is at 4.1002. However, notice that the RSI has moved into oversold territory (below 30.00), an indication that USD/PLN may be ready to bounce.  Resistance sits above at today’s highs near 4.2020, then horizontal resistance at 4.2587.  Above there, resistance is at the previous all-time high (before the war) at 4.3078. 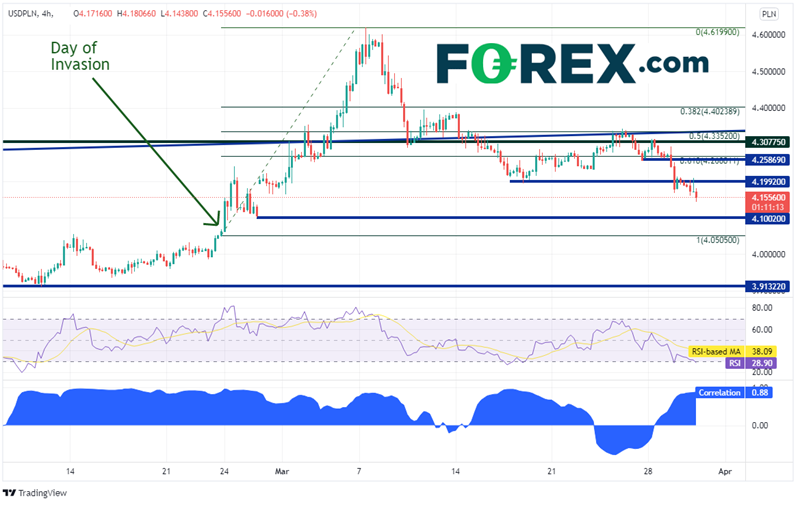 The chart of USD/HUF is similar to that of USD/PLN.  On the 240-minute timeframe, USD/HUF and USD/RUB currently have a correlation coefficient of +0.88.  In addition, USD/HUF has also pulled back towards the breakout point from before the invasion, however, it still has room to go.   Horizontal support sits at 323.608, just above the breakout point on February 24th at 319.56.  Notice that the RSI has just moved into oversold territory.  Therefore, the pair may be ready for a bounce.  Horizontal resistance sits above at 333.52.  The next resistance level is the previous all-time high (before the war) at 341.258.

USD/RUB is back to levels not seen since the start of the war.  However, its EM partners still have room to return to their breakout points.  On the shorter 240-minute timeframe, the correlation is strong. Therefore, if one doesn’t have access to trade USD/RUB, the Eastern European EMs may be a good alternative for the short-term trader.