What do current PMIs say about the global economy?

With strong PMI data, the recovery process seems to be well underway

The IHS Markit Purchasing Managers’ Index (PMI) monthly data are compiled by surveys of senior executives at  private sector companies in over 40 different countries  (via marketeconomics.com).  The main headline surveys include a Manufacturing PMI, a Services PMI, and a Composite PMI (although some countries only release Manufacturing PMI).  The preliminary PMI reading for the current month is released near the 20th of the month and the final readings are released at the beginning of the following month.  A reading above 50 is considered to be expansionary for the economy while a country is considered to be contracting when the reading is under 50.

Is the pandemic nearing an end?

On Monday, IHS Markit released the final readings for April’s Manufacturing PMI data.  While re-openings after the coronavirus are occurring at different rates, current demand and expected demand are driving these PMI indexes higher. All the G-20 readings are in expansion territory, with the exception of Mexico. Some areas have readings at all-time highs, such as Australia, the Eurozone (although readings vary among countries), the UK, and the US  And some have readings well above 60! 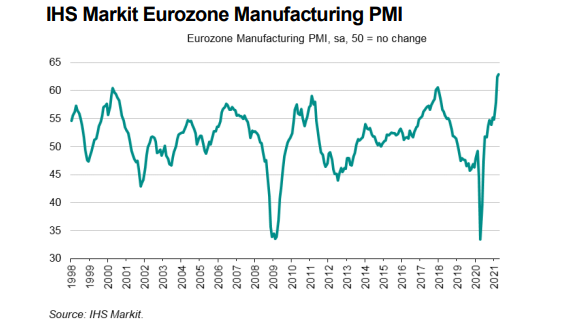 Earlier today, IHS Markit released the final readings for April’s Services PMI and Composite PMI data.  The service sector has been hit much harder by the coronavirus than the manufacturing sector.  As a result, with the re-openings occurring at different paces, the service sector data was mixed, globally.  In counties where the vaccinations are occurring more rapidly and economies are re-opening more quickly, the Services PMIs are at record highs.  These include countries such as the US, Australia, and the UK.  However, other countries are still under lockdowns and restrictions. As a result, their readings are in contraction territory.  These include countries such as Germany, Italy, Switzerland and Japan. (The Eurozone area reading as a whole was 50.5).

As for the Composite PMIs,  the results were once again mixed.  However, all of the G20 readings which report were in expansionary territory, with the exception of Brazil.   The US and UK had readings at or near all-time highs, Eurozone counties were in the low to mid-50s range.

Note also that input costs and output charges, which are two components of the indexes, are also at or near all-time highs.  This is due to higher supplier and transportation fees, as well as higher average prices charged.  The result should be an increase in inflation expectations, which would normally cause central banks to become less dovish.  However, most G20 central banks, with the exception on Canada, consider this inflation to be transitory and cannot be sustained at these levels.  Therefore, these central banks are “on hold” as they wait for more data before considering tapering.

The first and second quarters of the year have been dramatically different thus far in terms of direction for the US Dollar Index.  The DYX moved from a low of 89.21 on January 6th to a high of 93.43 at the end of the first quarter in March 31st.  Inflation expectations and bond yields moved higher as well. At the beginning of Q2, the DXY reversed and moved lower, to as low as 90.42 on April 29th.   Yields pulled back mildly, but not nearly as much as the DXY. May has started well for the US Dollar Index with the stellar PMI data. Horizontal resistance is just above at 91.49.  The next level of resistance is just above at the  38.2% Fibonacci retracement from the March 31st highs to the April 29th lows, near 91.57.  Horizontal support below is at 90.78 and the April 29th lows if 90.43. 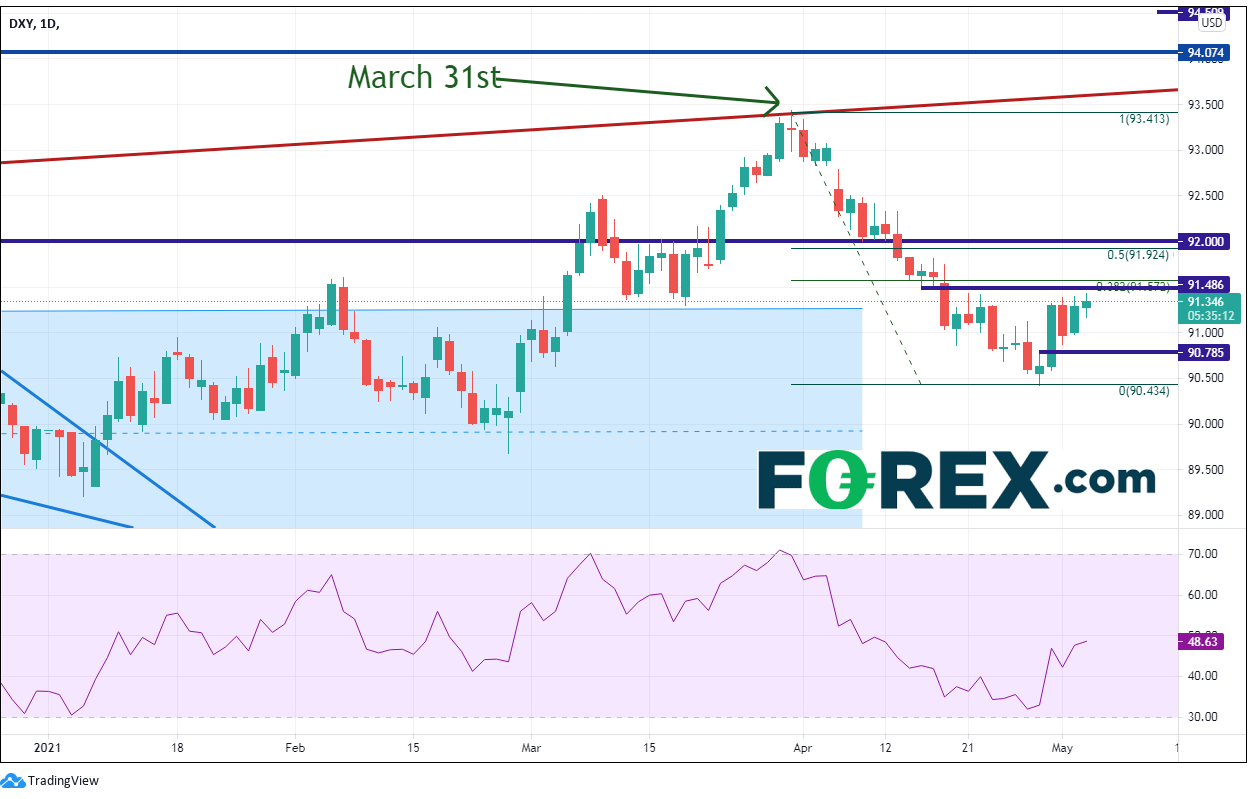 With the strong PMI data throughout much of the world, the recovery process from the coronavirus seems to be well underway, albeit at different rates.  The ultimate question that traders are asking now is “When will central banks notice and being to tighten monetary policy?”