The immediate focus will be on UK fundamentals and the Bank of England’s meeting tomorrow.

The pound managed to climb to its best level since September 2016 against the US dollar today. That was despite news UK construction PMI came in weaker at 51.9 vs. 54.3 expected. In the US, the ADP private sector payrolls report came in at 178,000 compared to 187,000 expected. But the upward revision to June's figure (to 191K from 158K) meant that overall the ADP report was a touch better than expected. However, it didn’t help the dollar whatsoever. It is obvious that the dollar bulls are waiting for the official non-farm payrolls report and wages data on Friday before potentially stepping in. If these figures come in significantly above expectations then the dollar may make a meaningful comeback, else the cable’s rally will most likely continue.

But the immediate focus will be on UK fundamentals and the Bank of England’s meeting tomorrow. The UK services sector PMI will be released in the morning, expected to come in at 53.6 versus 53.4 expected. The result of this PMI is unlikely to sway the decision of the BoE, so any moves in the pound from this source is likely to be short-lived. Policymakers at the BoE are likely to keep interest rates unchanged in a 6-2 vote. But if there are more votes in favour of a rate rise and/or the BoE comes across as more hawkish than expected then the pound could surge higher, especially if the Inflation Report contains bullish GDP or inflation forecasts.

GBP/CHF one to watch

As well as the GBP/USD, some of the GBP crosses are also looking quite interesting to us, including GBP/CHF. Over the past week or so, the Swiss franc has been weaker than even the US dollar. With the GBP/CHF breaking and holding above the old swing high at 1.2635, and subsequently moving north of 1.2750 resistance level, the path of least resistance is clearly to the upside. If the GBP remains bid, any weakness in this cross could be short-lived. The first support level we are now anticipating a bounce from is at 1.2795/6, the high from Tuesday’s range. Further support levels are seen at 1.2750 and 1.2635, levels mentioned above. In terms of resistance, apart from the psychologically-important 1.30 handle, there is nothing significant until 1.3070, the earlier 2017 high. Given the recent developments, I think the GBP/CHF is heading to probe liquidity above that level in the coming days/weeks.  Any sustained move back below 1.2635 would render this bullish outlook invalid. 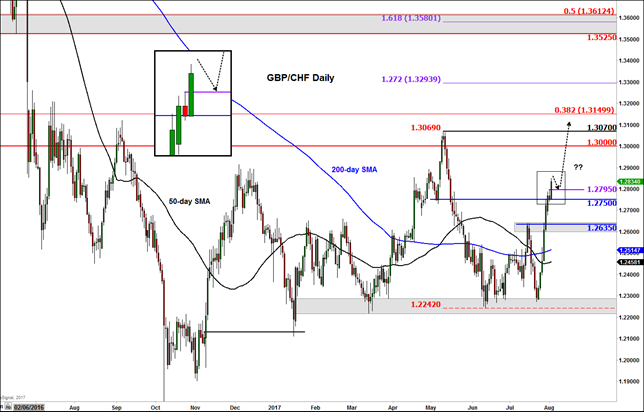