The latest developments in the oil market cannot be ignored...

Mirroring the likely path of a post-COVID-19 economic recovery, traders are gradually filtering back to their desks after a long holiday weekend. With volumes running far lower than usual and many major markets still closed, we’re cautious about reading too much into current prices, but the latest developments in the oil market cannot be ignored.

After a week-long marathon of negotiations, the world’s top oil producers agreed to a deal to cut global oil production by 9.7M bpd, about 10% of total output. The bulk of the promised cuts fittingly fall to Saudi Arabia and Russia, who kicked off the current oversupply issues by failing to reach an agreement back in early March.

When it comes to the oil market though, even these production cuts will not bring supply and demand into balance. The mass disruption from the COVID-19 outbreak has absolutely decimated demand (GasBuddy reported that demand for petrol has fallen by -55% from early February levels), and these cuts, especially relative to the inflation production figures over the last month, will not bring the market back into balance unless we see a dramatic “V-shaped” economic recovery in the coming weeks.

That said, the Saudi Oil Minister recently announced that the Kingdom is prepared to cut production further in June if necessary, so at least oil bulls can take solace in the fact that producers are taking the situation seriously. Even US President Trump hinted this morning that additional production cuts could be on the way.

Turning our attention to the hourly chart, prices for West Texas Intermediate crude oil, the American standard blend, are trading smack dab in the middle of the 4-week range between support at 20.00 and resistance up near 28.50: 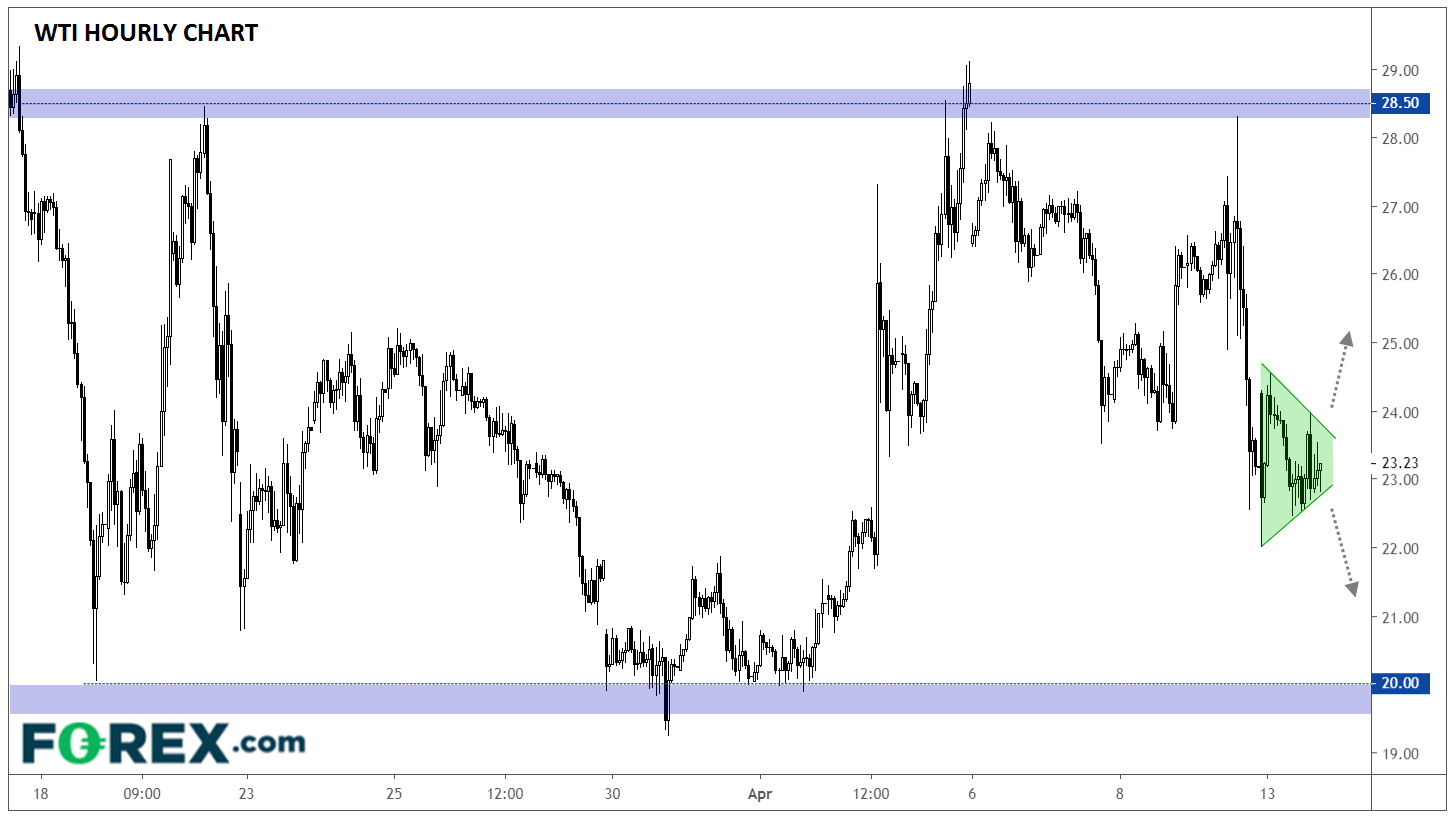 As we go to press, WTI is forming a short-term symmetrical triangle pattern. For the uninitiated, or the uninitiated, this pattern is analogous to a person compressing a coiled spring: as the range continues to contract, energy builds up within the spring. When one of the pressure points is eventually removed, the spring will explode in that direction.

It’s notoriously difficult to predict the direction of the breakout in advance, so short-term traders may want to wait for the breakout and trade in the same direction once its confirmed. For example, a downside breakout could open the door for a drop toward range support in the 20.00-21.00 zone, whereas a bullish break could set the stage for a continuation toward the 27.00 area, where we’ve seen resistance form earlier this month.