WTI: Crude in technical bounce ahead of US oil stocks

Although higher at the time of this writing, oil prices have been generally falling ever since that OPEC meeting on May 25. Disappointed that the oil cartel and Russia could not come up with a bolder plan to reduce the global crude surplus, market participants have been selling into every bounce since. In the short-term, the focus of the oil market participants will turn to the US.

Although higher at the time of this writing, oil prices have been generally falling ever since that OPEC meeting on May 25. Disappointed that the oil cartel and Russia could not come up with a bolder plan to reduce the global crude surplus, market participants have been selling into every bounce since. Yet at the same time, oil prices haven’t exactly collapsed, at least not in nominal terms anyway. After all, Saudi and co are at least trying to put a floor under prices by reluctantly limiting their oil production. This is likely to keep oil prices supported in the long-term, assuming that the Qatar situation does not scupper the OPEC’s efforts.

In the short-term, the focus of the oil market participants will turn to the US. Here, oil production and exports have been rising as OPEC countries lost market share. According to the EIA, US crude production averaged 9 million barrels per day in the first quarter, up nearly 200,000 b/d compared to the fourth quarter. About 900,000 b/d of US oil was exported to 24 different countries, compared to exports of 510,000 b/d in the previous three months. However, despite the increase in oil production, Q1 output was still down year-over-year and nearly 500,000 b/d less than levels hit in the first quarter of 2015.

So, the OPEC’s strategy to limit its oil production along with Russia and a few others hasn’t been a total failure. Indeed, US oil stocks have actually fallen for several weeks now, suggesting the glut may be falling after all. Any further sharp reductions in US stocks could put a floor under oil prices in the short-term. The API will be releasing its latest oil stocks data this evening, ahead of the official figures from the EIA tomorrow.

WTI has actually reached a key support area, which may help explain why it has bounced back today. As can be seen from the chart, the area between $46.75 and $46.95 was the last resistance zone prior to the rally that ultimately failed. Once resistance, it is now offering some support. Traders have respected this zone for three consecutive days now. In addition to resistance turning into support, this area represents the 61.8% Fibonacci retracement against the last rally. Thus, it is clearly a key area of support, which therefore means that in the event of a break down oil prices could sharply extend their losses. If this area were to break down in the next few days then this would end any bullish hopes in the short-term. As a result, WTI could then drop to test the next support at $46.05 and potentially drop all the way to its prior lows around the $43.80-$44.00 area next. Conversely, if support around the $46.75-$46.95 area holds and WTI manages to break a few short-term resistance levels, including $48.20, then we may see a sizeable bounce soon. For now, though, the structure of short-term lower lows and lower highs continue to hold. So, the path of short-term least resistance is still to the downside and will remain that way until the chart creates a decisive bullish pattern (for example, a clean break of $78.20 resistance level). 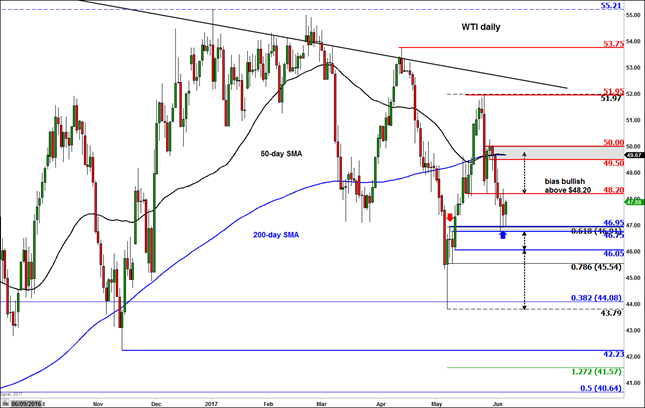