Yesterday the US Department of Energy published its latest summary of crude oil inventories for the week ending January 29, 2016. The report showed several indications that would normally cause oil prices to fall. For one, total US commercial crude inventories rose by 7.8 million barrels which lifted stocks to above 500 million barrels for the first time since 1930! The build was also significantly more than expected and higher than the 3.8 million barrel increase that was reported by the American Petroleum Institute the day before. What’s more, gasoline inventories increase by 5.9 million barrels while distillates fell by just 0.8 million barrels – you would expect to see a more significant drawdown at this time of the year. Furthermore, the EIA said distillate stocks are near the upper limit of average range as demand for the product was 16 per cent lower versus four weeks ago.

Yet after a small pullback, oil prices embarked on a sharp rally that eventually saw WTI close about 8 per cent higher. It was quite surprising how the oil market reacted to the sharp build in oil inventories data. This suggests that most of the bad news is in the price and WTI may stabilise around the $30-$35 now. Bearish speculators are probably also discouraged by on-going speculations that Russia is willing to meet with the OPEC to discuss a possible production cut. If this were to happen, the oil market would tighten and prices may well stage a more significant recovery. Conversely, if there is no deal then a lot of traders would be disappointed, leading to renewed selling pressure in oil.

The falling dollar is undoubtedly another reason why buck-denominated commodities, including gold, silver and oil have all jumped. The US currency tumbled after a Federal Reserve member signalled the US central bank may be having second thoughts about continuing with its rate hiking cycle at the pace it had projected in December. Bill Dudley, the President of the Reserve Bank of New York, on Wednesday said that financial conditions have deteriorated markedly since the Federal Open Market Committee increased rates for the first time since 2006, in December. The dollar then extended its decline after the latest services sector PMI data pointed to a weaker non-farm payrolls report on Friday. Consequently, the market further lowered the odds of any Fed rate rises in 2016. According to the CME Group’s FedWatch tool, traders now see less than a 30 per cent probability of one rate hike at any point this year.

If Friday’s jobs report does disappoint expectations badly then the dollar could extend its decline further, potentially leading to more gains for oil. Overall however I feel we will see some side-ways price action going forward, until such a time that either the dollar starts to push higher once again or the fundamentals improve significantly for oil. But WTI’s large bullish engulfing candle and desire to hold above the $30 handle is certainly a positive development in the short term. If it manages to break above short term resistance at $32.70 then it may stage a rally towards, and this time possibly beyond, the next resistance at $34.50. A potential break back below $30 would invalidate any bullish bias, however. 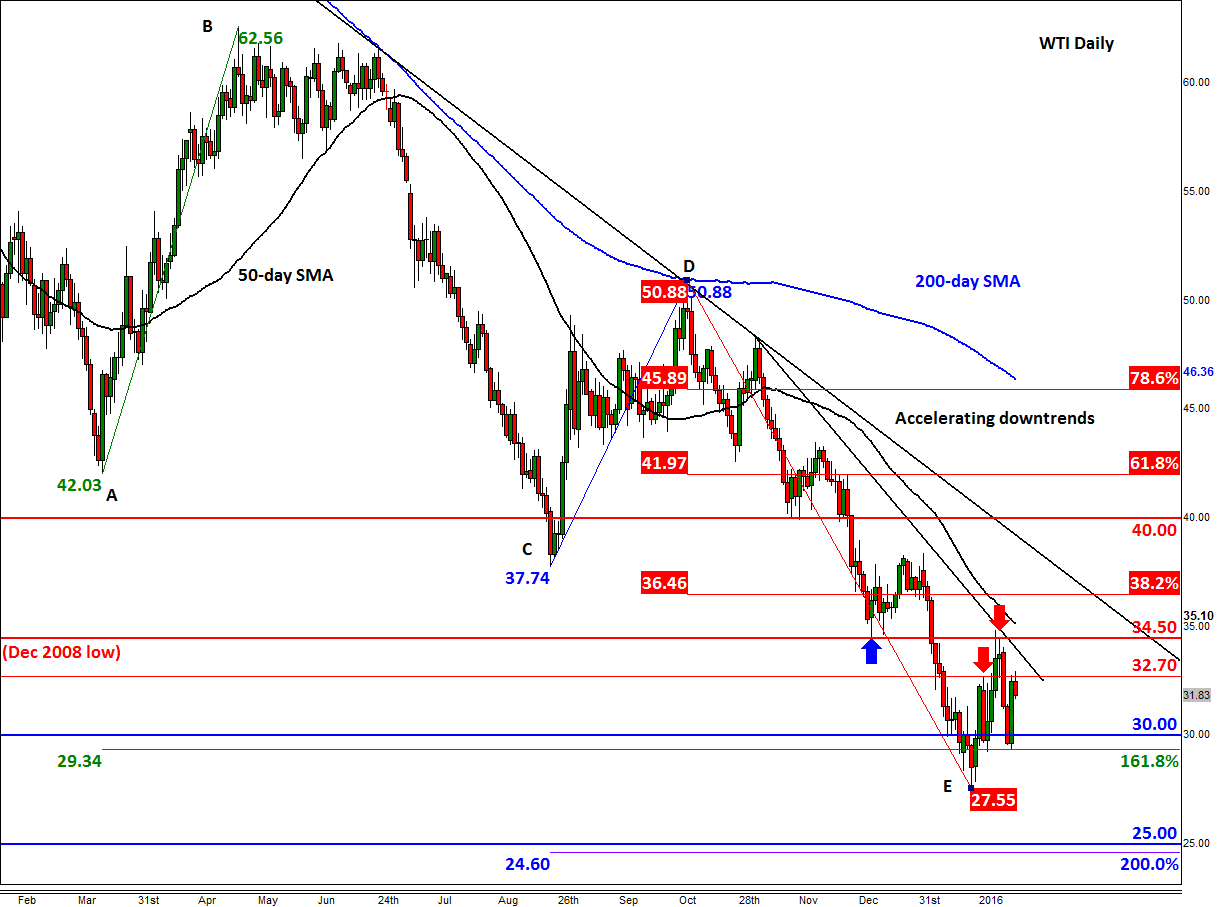