Yen surges on US warnings against Japanese intervention

During the gathering of central bankers and finance ministers at the G7 meetings in Japan on Saturday, the US reiterated warnings to its host against intervening to weaken the yen. In the weeks prior to the meetings, Japanese officials had been issuing an intensifying stream of intervention rhetoric attempting to justify Japan’s readiness and willingness to take action in the event of exceptional yen volatility (or perhaps more accurately, yen strengthening). Partly as a result of these public comments and the resulting potential risk of an actual intervention, the yen had been weakening since early May, pushing up the USD/JPY currency pair from its recent long-term lows.

On Saturday, however, U.S. Treasury Secretary Jack Lew made statements directed at Japanese officials regarding the firm US stance against currency devaluations. In those statements, Lew referenced the G20 meetings in China this past February, where members made commitments to avoid competitive devaluing of currencies. As a result of these statements, pressure against yen intervention was made a key focal point of the G7 meetings.

The potential implications of such pressure were readily apparent as USD/JPY began the new trading week. Prior to the weekend, the currency pair had remained in recovery mode as the risk of intervention weighed heavily on the yen. On Monday, however, yen strength helped prompt USD/JPY to fall sharply from its weekend perch above 110.00, dropping down to a low just above 109.00.

From a technical perspective, USD/JPY has continued to trade in a well-defined downtrend characterized by lower highs and lower lows since late last year. Since early May, however, the currency pair has risen from its new long-term low of 105.54, as a rebound for the dollar has been augmented by a weakening yen due to the noted verbal intervention by Japanese officials. USD/JPY went on to hit a high of 110.58 late last week, just short of key 111.00 resistance, before Monday’s G7-driven retreat back down towards 109.00. In the process of this retreat, price has tentatively dropped back below its 50-day moving average. With continued trading under the 110.00 psychological level, the G7 intervention warnings from the US could be seen by the markets as being at least tentatively effective, and the yen’s recent propensity to strengthen could likely resume. In this event, the next major downside target for USD/JPY remains at the key 108.00 support level, followed further to the downside by the major support objective at 105.00. 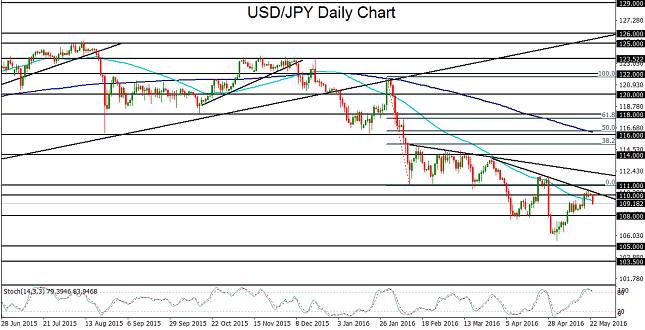