On the U.S economic data front, the Mortgage Bankers Association's Mortgage Applications slipped 0.6% for the week ending November 27th, compared to +3.9% in the previous week. Automatic Data Processing's Employment Change showed that 307K jobs were added on month in November (440K expected), compared to a revised 404K jobs added in October. Finally, the Federal Reserve's Beige Book stated that most Districts described economic expansion as moderate since the last reporting period. Nearly all Districts reported that employment rose, but for most, at a slow pace and that a full recovery is still incomplete. In most Districts, companies disclosed that input prices rose modestly, along with selling prices of final goods. However, the rise in Covid-19 cases has brought about more school and plant closures as well as renewed fears of infection.


Tesla (TSLA), the electric-vehicle maker, is gaining ground premarket as the stock was upgraded to "buy" from "neutral" at Goldman Sachs. 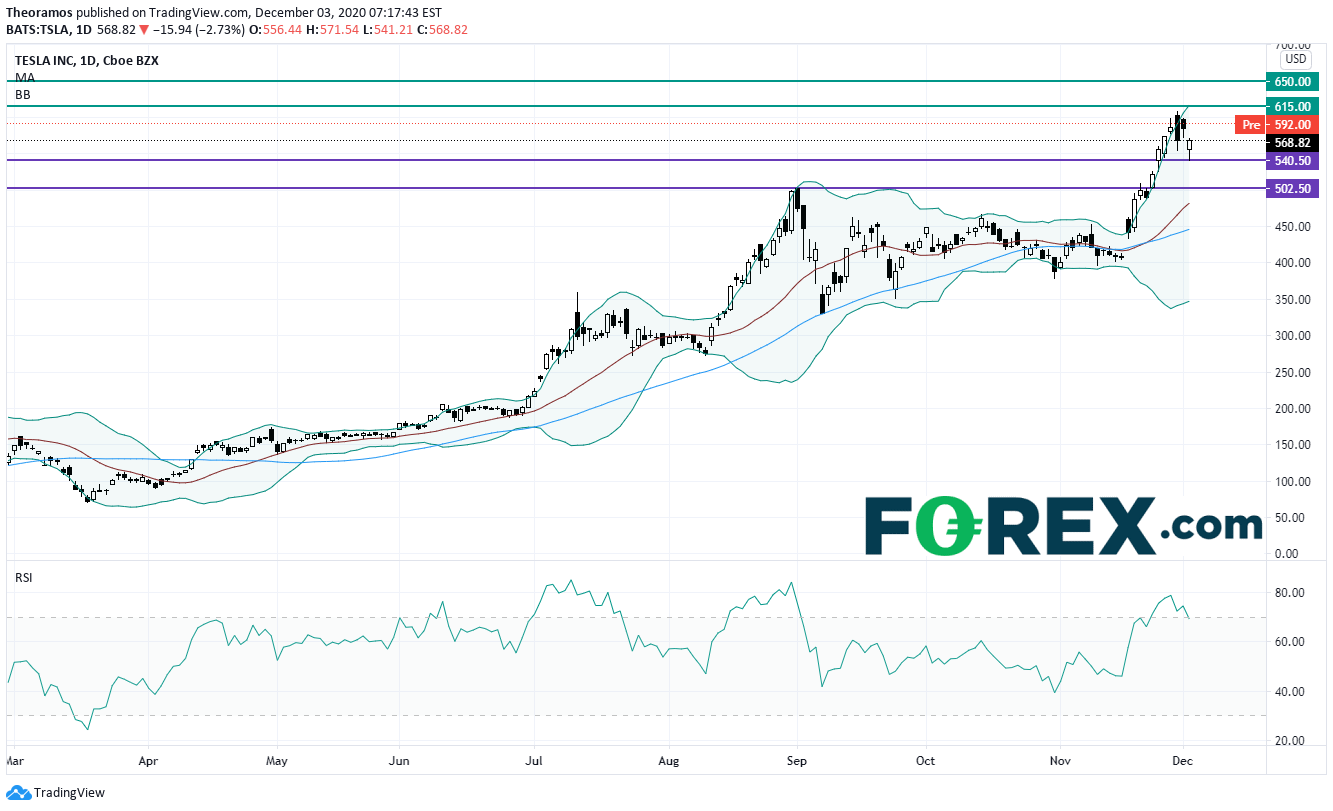 3M (MMM), the conglomerate, "is planning to initiate restructuring actions that will impact all business groups, functions and geographies. As a result, the company expects to take a total pre-tax charge of 250 to 300 million dollars. 3M anticipates annual pre-tax savings of 200 to 250 million dollars from these actions. The restructuring is expected to impact approximately 2,900 positions globally."

XPO Logistics (XPO), the transportation and logistics company, "announced that its board of directors has unanimously approved a plan to pursue a spin-off of 100% of its logistics segment as a separate publicly traded company. XPO intends to structure the spin-off as a transaction that is tax-free to XPO shareholders and would result in XPO shareholders owning stock in both companies."

Dollar General (DG), an operator of a chain of discount stores, posted third quarter comparable sales up 12.2%, higher than anticipated.

Five Below (FIVE), a chain of value-oriented retail stores, reported third quarter EPS of 0.36 dollar, beating forecasts, up from 0.18 dollar a year earlier on net sales of 476.6 million dollars, above the consensus, up from 377.4 million dollars a year ago.

Synopsys (SNPS), a developer of electronic products and software, announced fourth quarter adjusted EPS of 1.58 dollar, just ahead of estimates, up from 1.15 dollar a year ago on revenue of 1.0 billion dollars, as expected, up from 851.1 million dollars a year earlier.

Splunk (SPLK), a provider of software for machine log analysis, disclosed third quarter adjusted LPS of 0.07 dollar, missing expectations, down from an EPS of 0.58 dollar a year ago, on sales of 558.6 million dollars, worse than expected, down from 626.3 million dollars a year earlier.
Related tags: Equities Indices