British American Tobacco, a cigarettes maker, posted 1H results: "Reported revenue increased 0.8% to 12,271 million pounds (...) Reported profit from operations was up 16.4% to 5,097 million pounds, with reported operating margin up 550 bps at 41.5%, as the prior period was impacted by the charge in respect of the Quebec class action in Canada; (...) Reported basic and diluted EPS increased 22.7% to 151.2 pence and 150.7 pence respectively."


#GERMANY#
ProSiebenSat.1 Media, a German broadcaster, reported that it swung to a 2Q net loss of 54 million euros from a net income of 93 million euros in the prior-year period, citing its declining advertising business.


#FRANCE#
BNP Paribas, a French bank, reported that 2Q net income declined 6.8% on year to 2.30 billion euros. It pointed out: "The cost of risk, at 1,447 million euros, rose by 826 million euros compared to the second quarter 2019. It stood at 65 basis points of outstanding customer loans. The updating of macroeconomic scenarios led to a 329 million euro increase in the ex-ante provisioning of expected losses (including their sectoral component). (...) the common equity Tier 1 ratio stood at 12.4%, up 40 basis points from 31 March 2020."

Vinci, a French construction firm, said it swung to a 1H net loss of 294 million euros from a net income of 1.36 billion euros in the prior-year period on revenue of 18.49 billion euros, down 15% on year. The Company expects the earnings slip in the 2H to be less pronounced than that of 1H.

L'Oreal, a cosmetics producer, announced that 1H net income fell to 1.83 billion euros from 2.33 billion euros in the prior-year period on sales of 13.10 billion euros, down 12.0% on year. It pointed out: "The consumption of beauty products over the period was strongly impacted by the closure of millions of points of sale, which caused a real crisis of supply, rather than demand, with consumers temporarily unable to purchase products and services."

Saint-Gobain, a construction materials producer, said it swung to a 1H net loss of 434 million euros from a net income of 689 million in the prior-year period. 2Q operating income plunged 49.6% to 827 million euros on sales of 17.76 billion euros, down 18.1%.

Air France-KLM, an airline company, posted a 2Q net loss of 2.61 billion euros from a net income of 97 million euros in the prior-year period, citing: "an impairment on Airbus 380 and 340 aircraft at respectively -520 and -72 million euros, Covid-19 related over-hedging at -105 million euros, and restructuring provision at -227 million euros". 2Q revenue plummeted 83% on year to 1.18 billion euros.

From a daily point of view, the stock has broken a key support at 3.6E. Moreover, the RSI is capped by a bearish trendline since mid-July. Below 4E look towards the all-time low at 3E and 2.5E in extension. 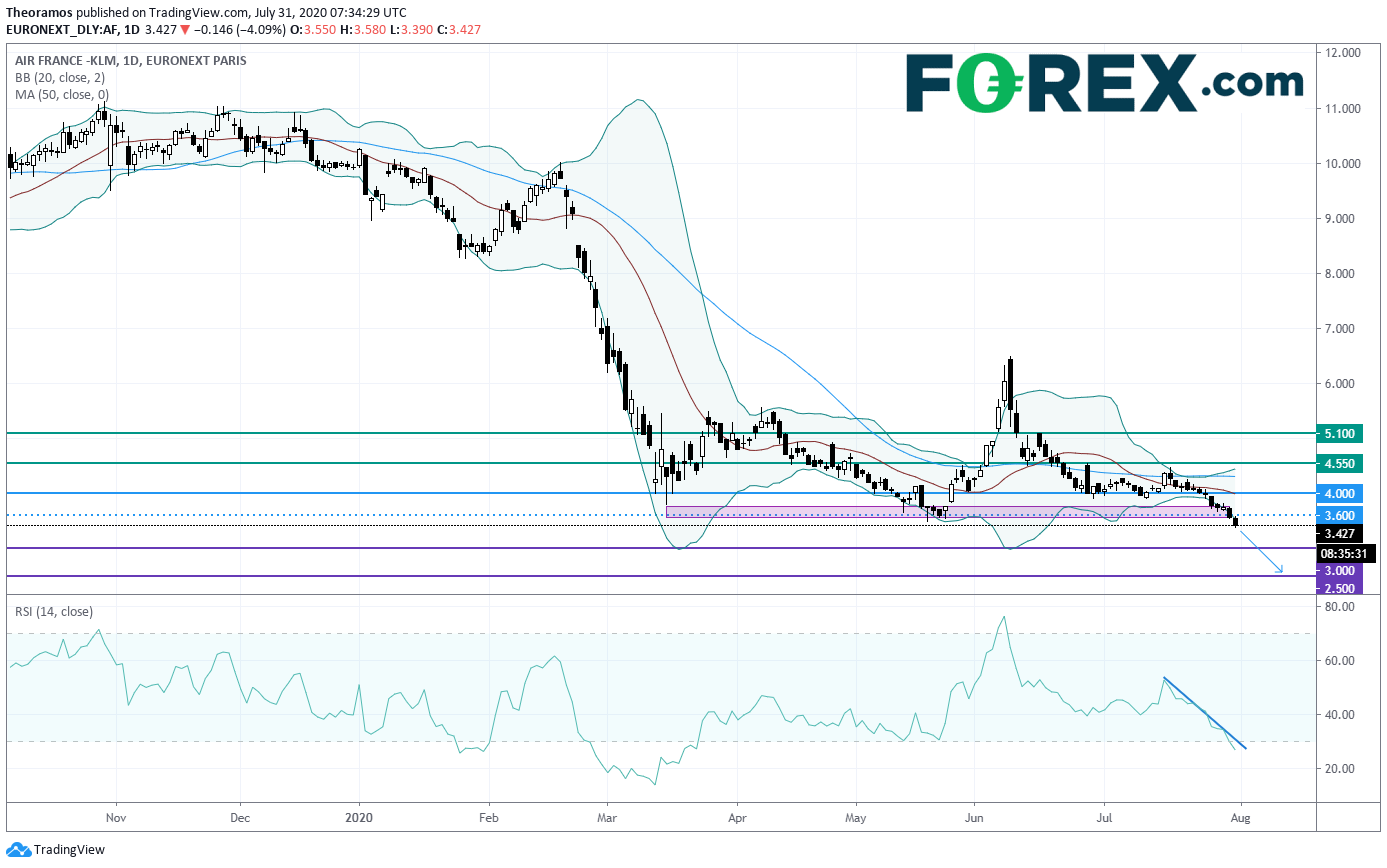 
#SPAIN#
Amadeus IT, which processes travel and tourism transactions, reported a 2Q net loss of 315 million euros, compared to a net income of 309 million euros in the prior-year period.


#SWITZERLAND#
Swiss Re, a Swiss insurance firm, said it swung to a 1H net loss of 1.14 billion dollars from 953 million dollars in the prior-year period. Claims and reserves related to the coronavirus pandemic amounted to 2.5 billion dollars. The Company's CEO said: "While some degree of uncertainty remains with regards to future Covid-19 losses, we are confident in the outlook for our Group."