A peek at (peak?) inflation

We knew going into last month’s inflation report that it was likely to be followed by a slew of ‘peak inflation’ headlines. CPI was forecast to soften from multi-decade highs and, when it did, the headlines did not disappoint.

Annualised prints of CPI, core CPI, PCE and core PCE all softened in April, and that’s an important first step to identifying a peak. But a month’s worth of data points don’t define a trend. Therefore, Friday’s inflation report is really about convincing us that the worst of eye-watering levels of inflation really are behind us. We simply need to see is soften again. And if we look through some inflation inputs, it’s beginning to look promising that it is. 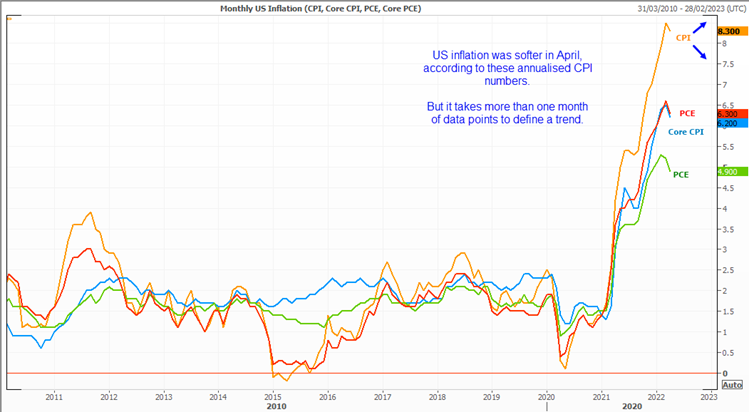 Some inflationary inputs are pointing lower

‘Prices paid’ by services and manufacturing companies also fell in April according to the ISM and Philly Fed reports. Import prices (effectively imported inflation) and wages also fell on an annualised basis, whilst lumber prices have plummeted from this year’s high. There are also signs that bottlenecks are easing with the supply chain pressure index falling lower in March, and sitting quite a bit beneath its December peak. The Baltic dry index – the cost of sea freight – has also turned lower. And earlier this week US retailer Target (TGT) warned they will have to slash prices due to a large build-up of inventory (low demand). 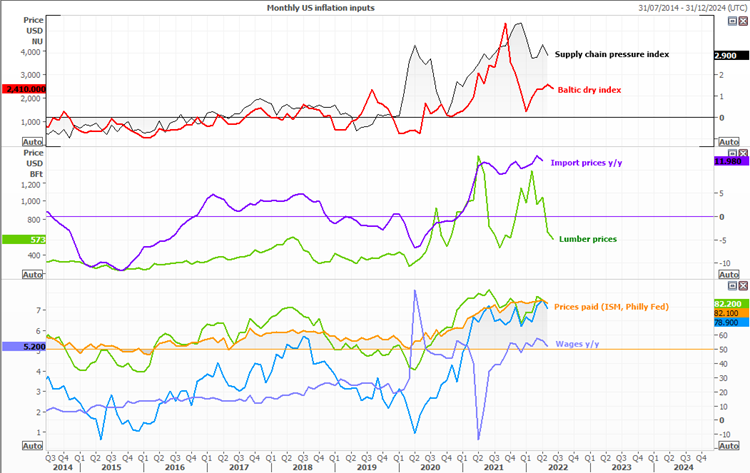 When things get too hot, they also get ‘sticky’

As nice as that is to see, it doesn’t escape the fact that commodities (and energy in particular) are soaring. High energy prices make an impact globally for consumers and businesses, whether it be manufacturing, transportation or simply heating your home. Oil prices continue to rise with US driving season underway and China’s reopening supporting its trend. Oil therefore remains a major inflationary input for policy makers to mull over. Earlier this week, US Secretary of the Treasury Janet Yellen said inflation is at “unacceptable levels” and likely to remain high. We suspect most agree. Going forward it is not so much the absolute level of inflation that matters so much as its direction and rate of change.

Ultimately the fear going forward is that inflation has become so hot that it will become ‘sticky’ at higher levels. The longer prices remain high the more of a drag it becomes on consumption, consumer and business sentiment and therefore growth.

So let’s face the fact that central banks are behind the curve and there was no need for inflation to get to such levels. It surely would have been better to feel short-term pain (higher rates, sooner) for long-term gain (lower rates than we’re now likely to have going forward). The cost of delaying these hikes is likely to put a further strain on consumer sentiment and housing sector, of which cracks are already appearing.

Economists are expecting inflation to fall in May 2022

How might markets react around the US inflation report?

Wall Street’s major indices have been confined within a range for the past 8-days, and it seems clear that the US inflation report is a likely catalyst to make it break out of that range – one way or another. A softer data set could help equity traders rejoice and break indices out of their ranges, and with some volatility for decent measure.

A softer inflation report could also weigh on the dollar for the same reasons equities rally; softer inflation removes some pressure for the Fed to act so aggressively with higher interest rates. We’ve already heard murmurs of the Fed potentially pausing rates around September after a series of 50-bps hikes. And a soft inflation print would certainly help with that case.

Of course, should inflation unexpectedly rise then it could wreak havoc across markets. Equities could embark upon their next leg lower, and the US dollar catch a fresh bid as the case for aggressive hike to continue from the Fed retake centre stage.