The US ADP Employment Change for December showed that 235,000 private jobs were added to the economy vs an expectation of +150,000.  November’s print was revised higher from +127,000 to +182,000.  Keep in mind however that ADP has recently changed its methodology for calculating its Employment Change.  In addition, ADP has also said that this is not to be used as a leading indicator for Non-Farm Payrolls, which are to be released on Friday.  Expectations for the NFP print are +200,000 vs +263,000 in November. Traders don’t seem to care about what the ADP says.  Stocks sold off on the print and the US Dollar went bid as traders worry that stronger jobs may allow the Fed to be more aggressive in its rate hikes.  It should also be noted that Initial Jobless Claims for the week ending December 31st, was only 204,000 vs and expectation of 225,000 and a previous reading of 223,000.  This indicates that less people applied for unemployment benefits during the last week of the year than was anticipated. It was also the lowest reading since late September 2022.

USD/JPY rose aggressively during the first three quarters of 2022, trading from a low on January 14th, 2022, at 113.48 to a high on October 21st at 151.95.  Since then, the pair has pulled back aggressively in an orderly downward sloping channel, closing the year below the 50% retracement from last year’s low to high at 130.77.  However, USD/JPY has moved higher this week after holding horizontal support from the lows of August 2nd, 2022, at 130.39.  The pair has traded higher for the past 3 days (including Thursday) and is threatening to break out above the top of the channel trendline near 133.62. 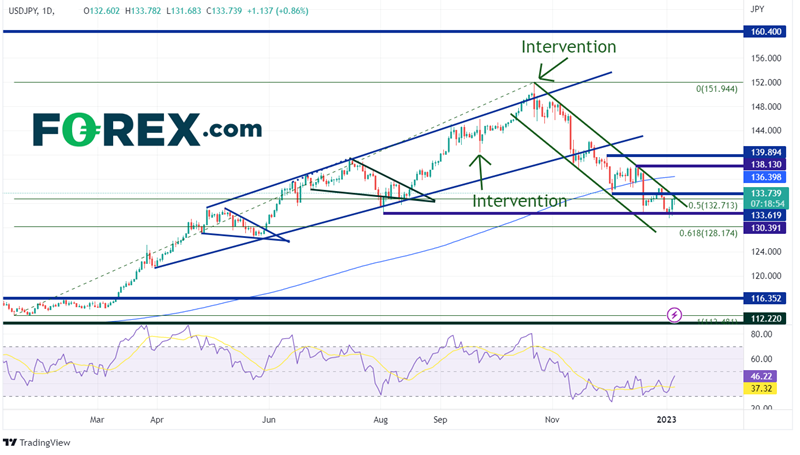 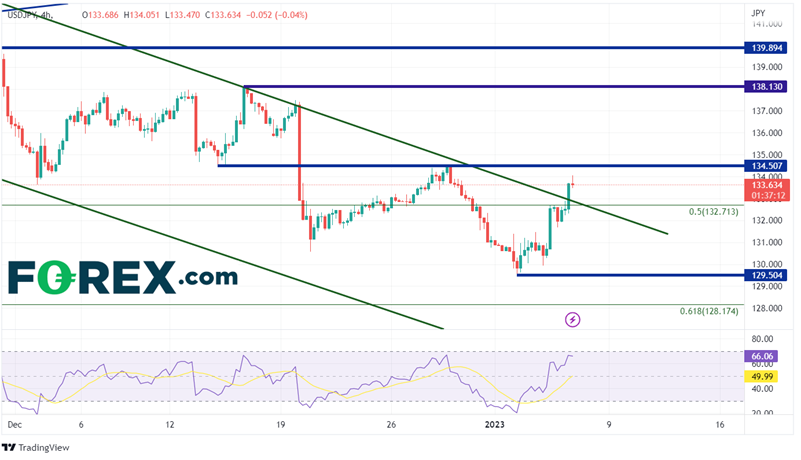 Good news from the jobs front has sent the US Dollar higher in anticipation of a more hawkish Fed.  USD/JPY has followed right along with it.  Will the pair continue to move higher?  It may depend on the Non-Farm Payroll data due out on Friday!