Equity markets posted broad gains yesterday following progress with peace talks between Russia and Ukraine. Hosted in Turney by PM Erdogan, Ukraine again offered ‘neutrality’ and Russia agreed to pull back some of their military from ‘military operations’ around Kyiv, although US intelligence has already cast doubt on that pledge from Russia.

The US dollar falters at its YTD high

Despite its best effort on Monday, the US dollar index failed to probe its 2022 high of 99.42 and initially fell over -1% as its lost its safe-haven appeal. A hawkish comment from an ECB member also helped the euro cruse its way to the top of the leader board and trade higher against all its FX major peers.

ANZ release their monthly business sentiment survey which questions respondents outlook of the economy over the next 12 months, and how it currently compares to 12 months ago. In a nutshell, things look dire with the headline index currently sitting at its most pessimistic level since August 2020. Perhaps a surprise increase can help boost the Kiwi dollar today. Or not. But a market we’re watching closely is AUD/NZD as it has pulled back to a key support level. 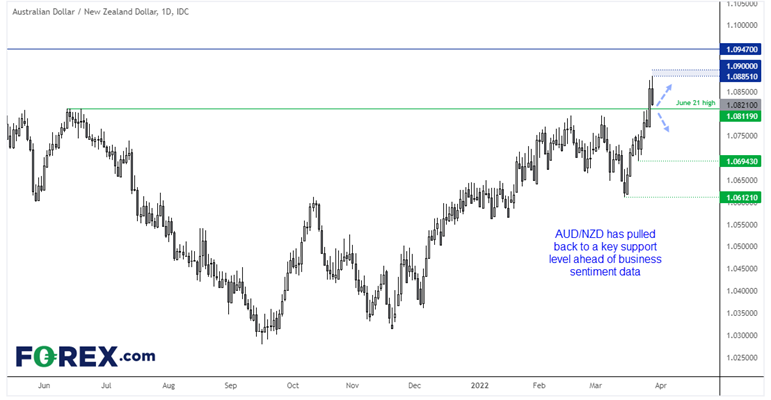 AUD/NZD broke above the June 2021 high on Monday, a level that had held as resistance. But now prices have pulled back overnight it has the potential to become support should business sentiment disappoint in a couple of hours. 1.0900 would be an initial bullish target ahead of 1.0947 for trad traders, whilst 1.0750 or 1.0700 could make for countertrend targets should we see a (surprise) improvement out business outlook.

Volatile trade for gold and oil

It was another volatile day for oil with its daily high to low range spanning close to 10%. Yet it closed just -2% down from its prior close and held above trend support. Shanghai lockdowns initially weighed on prices although the fact they are not indefinite likely helped soothe the blow somewhat.

Gold continues to hold above the June 2021 high around 1916.50, but only just. Another failed attempt to break below 1900 reversed course and formed a bullish pinbar back above but key support levels to show demand remains for the yellow metal. Perhaps metal traders aren’t so confident of Russia’s vow to scale back from Ukraine as equity traders are, but perhaps they’re also reluctant to offload their holding ahead of key inflation data scheduled for this week.