AUD/JPY may have bottomed out

The Australian dollar has outperformed in recent days due mainly to the rebounding commodity prices. In addition, the RBA is no longer considered to be a dovish central bank which means interest rates are likely to remain at 2% for the foreseeable future. In fact, if commodities recover more profoundly and inflation picks up then calls will increase for a rate rise. What’s more, economic data from Australia has improved markedly in recent times, with the fourth quarter GDP rising 0.6% in the fourth quarter, as we found out overnight. This was more than expected. If the current "risk-on" trading environment sustains itself, then the Aussie is likely to perform better against a currency where the central bank is still dovish, such as the euro or the yen. The yen has fallen sharply over the last few days as traders continue to unwind their safe haven bets as equities and oil bounce back. Unless something happens to cause stocks to tumble once more, it looks like the AUD/JPY may have further room to the upside.

Indeed, the daily chart of AUD/JPY is beginning to look rather constructive, at least in the short-term outlook. But as it still remains inside a well-established bearish channel, while both the 50- and 200-day moving averages are pointing lower, I am not so sure about the longer term outlook yet.

The AUD/JPY’s key reversal day was on February 11 when the bears failed to hold their ground below the psychologically-important 80 handle on a closing basis. It has since had numerous unsuccessful attempts to break below this level.  The failure to do so is very bullish, at least from the technical point of view. The AUD/JPY also created a bullish engulfing candlestick yesterday which is a further positive technical sign. It has since broken above the recent range highs of around 82.05, which was formerly support.

Price action is therefore looking rather bullish. The last thing the bulls need now is a close back below 82.05, the high of recent range. If seen, the AUD/JPY may have another go at 80. If it breaks below 80.00 on a closing basis then all bets are off. But while 80.00 holds and price remains above the 82.05 level then there is a good chance we will see a more profound recovery, perhaps towards – if not beyond – the resistance trend of the bear channel. Before price gets to the trend line, there are numerous other potential resistance levels to watch, including the 50-day moving average at 83.00 and the area around 85.70-86.30 which was previously support and ties in with the 61.8% Fibonacci retracement level of the most recent downswing. 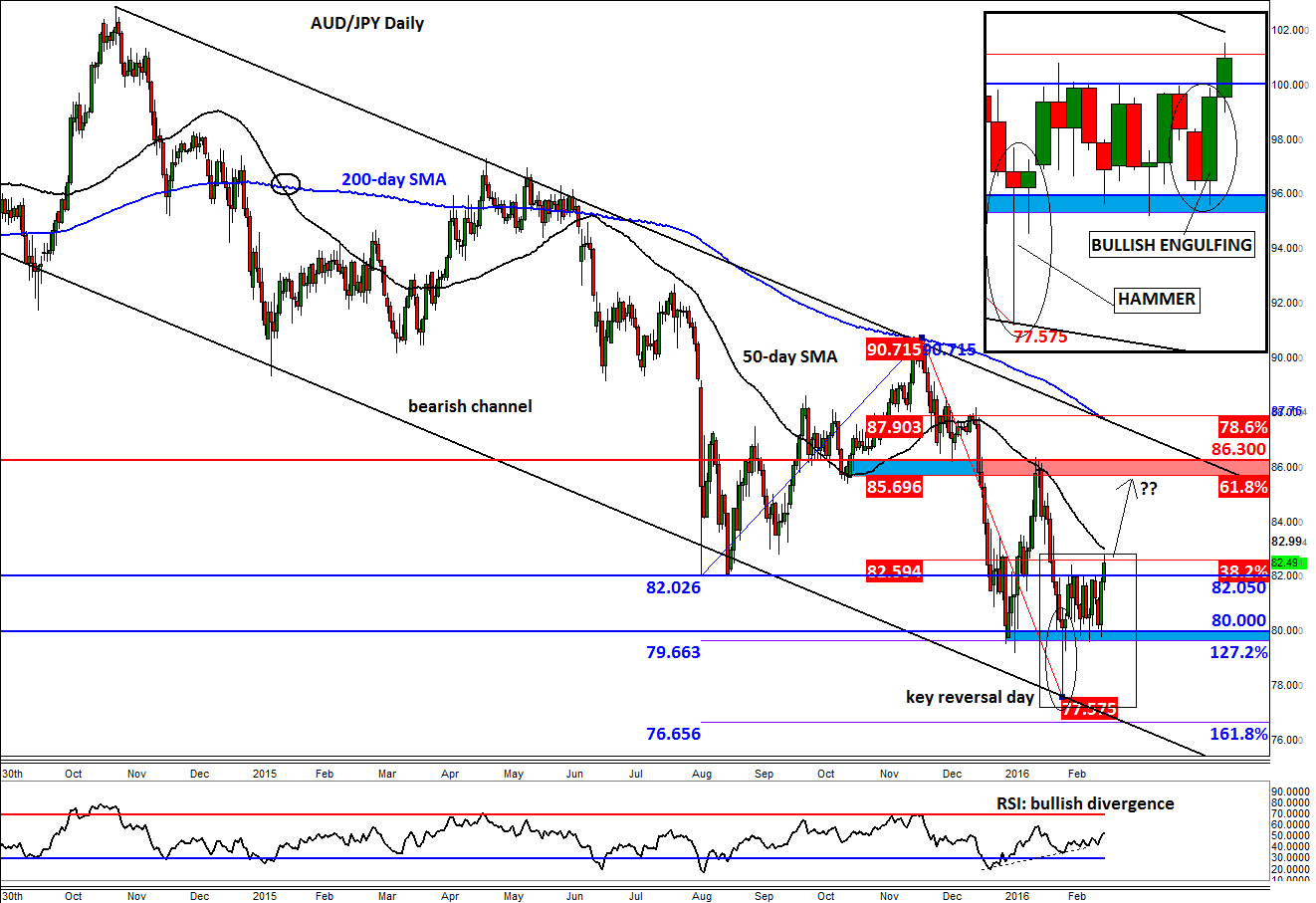