Summary of the statement 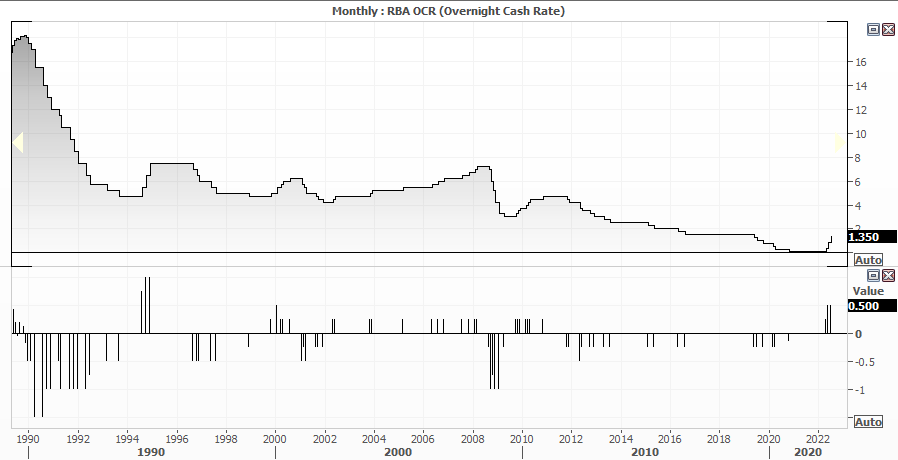 The RBA opted for a second consecutive 50-bps hike, taking their OCR (Overnight Cash Rate) to 1.35% from 0.85%. It’s their third hike in as many meetings which has seen the central bank lift their base rate by 125-bp.

Yet with the RBA themselves expecting inflation to rise to 7% by the year end, it remains debatable as to whether the RBA are being aggressive enough. Consumer expectations rose to 6.7% in June and risk becoming anchored, weighing on demand and keep realised inflation high.

However, whilst uncertainties remain (Ukraine, household spending), the RBA see the economy as ‘resilient’ with unemployment sitting near a 50-year low. Like most central banks, the RBA is treading a fine line between successfully taming inflation and tipping the economy into a recession. So the question from here is how many more hikes they have up their sleeve to steady inflation (and expectations) without rocking the economic boat.

The RBA have the opportunity to change rates at any of the five meetings between August and December this year. With money markets implying a rate of ~3% rate by the year end and rates currently at 1.35%, it allows for an average hike of 33-bps at each of those five meetings.

Perhaps they will not hike at every meeting and opt for a ‘pause’ (as some Fed members have suggested for September). Personally, I suspect the RBA will hike by 50-bp in August and September to get the more ‘aggressive’ hikes out of the way earlier, then revert to 25-bp increments and perhaps a 15-bp hike in December to take rates to a cool 3.0%. But if inflation steadies then it’s also possible they may only hike rates closer to 2.5% by December.

The RBA will be in a better position to be data dependant after the latest inflation data, which is scheduled for the 27th of July, and that will help us (and the RBA) better gauge their trajectory going forward. 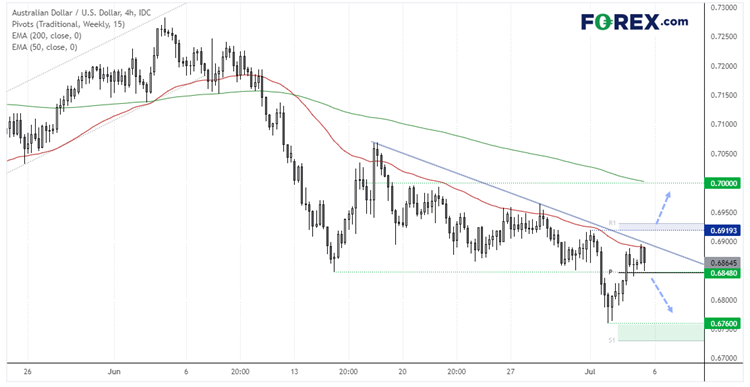 AUD/USD was quick to sell off as soon as the 50-bp hikes hit the screen. The battler finds itself at an interesting juncture from a technical perspective. The pair has seen a solid rebound since its false break of 0.6800 and has found support above its weekly pivot point. Yet the 50-bar eMA and bearish trendline are now acting as resistance. Should the US dollar regain strength then a break beneath 0.6840 assumes a seeing high has been seen. To switch to a bullish bias with greater conviction I’d prefer to wait for a break above the 0.6200 resistance zone.