With AUD/USD rising on Monday after rebounding from last week’s two-week lows, traders were preparing in eager anticipation for the Reserve Bank of Australia’s (RBA) rate statement to be released early on Tuesday.

Anticipation is especially keen since key Australian inflation data last week in the form of the Consumer Price Index (CPI) for Q1 came out significantly lower-than-expected, with the headline CPI falling 0.2% vs expectations of a 0.3% rise. The fall was due in part to a recovery of the Australian dollar in the past three months that has progressively decreased the cost of imports. This very unexpected deviation from prior inflation forecasts prompted a swift and substantial fall for AUD/USD below previous support at 0.7700 to approach the 0.7500 level, before rebounding.

The primary implication of this surprising deflationary reading is that it provides additional pressure and impetus on the RBA to cut benchmark interest rates from the record-low 2.00% during Tuesday’s policy meeting. Prior to release of the inflation data, the RBA was not widely expected to cut interest rates, but since the CPI numbers came out last week, speculation over a potential rate cut has increased markedly.

From a technical perspective, the past three months have seen AUD/USD stage a sharp recovery from January’s multi-year lows near 0.6800 as the dollar has generally weakened due to a dovish Federal Reserve and weak US economic data, and commodities have rebounded accordingly. Most recently, this has resulted in a new 10-month high above 0.7800 within the past two weeks, prior to the noted CPI-driven drop.

Despite the weakened US dollar in recent months, any actual rate cut or indication of a near-future rate cut on Tuesday’s RBA meeting could likely have the effect of pressuring AUD/USD to retreat significantly further. In this event, the immediate downside target is at the noted 0.7500 key support level. Any further breakdown below 0.7500 could then prompt a move towards 0.7350-area support. In contrast, if interest rates remain unchanged and the RBA statement’s language is not overtly dovish, a return back above the noted 0.7700 level could prompt a further continuation of the current three-month uptrend. 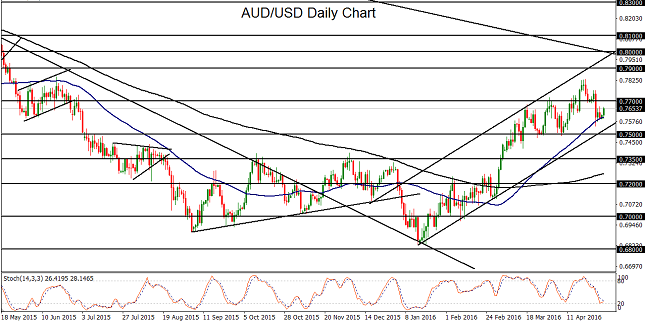