By :
Global Author
The US Dollar was bearish against most of its major pairs on Wednesday with the exception of the NZD, GBP and JPY. On the US economic data front, the Mortgage Bankers Association's Mortgage Applications slipped 0.6% for the week ending November 27th, compared to +3.9% in the previous week. Automatic Data Processing's Employment Change showed that 307K jobs were added on month in November (440K expected), compared to a revised 404K jobs added in October. Finally, the Federal Reserve's Beige Book stated that most Districts described economic expansion as moderate since the last reporting period. Nearly all Districts reported that employment rose, but for most, at a slow pace and that a full recovery is still incomplete. In most Districts, companies disclosed that input prices rose modestly, along with selling prices of final goods. However, the rise in Covid-19 cases has brought about more school and plant closures as well as renewed fears of infection.

The Euro was bullish against most of its major pairs with the exception of the AUD and CHF. In Europe, the German Federal Statistical Office has released October retail sales at +2.6% (vs +1.2% on month expected). Also, the European Commission has posted October PPI at +0.4% (vs +0.2% on month expected) and jobless rate at 8.4%, as expected.

The Australian dollar was bullish against all of its major pairs. The AUD/USD gained 39 pips on Wednesday as the pair extends its uptrend towards key resistance at 0.742. A break above 0.742 would be a strong bullish signal. Using the "technical Insight" research tool under the Market Analysis tab, a short-term bullish signal has been identified in the Commodity Channel Index (CCI) indicating a relatively far deviation from the pair's 20-day average price. 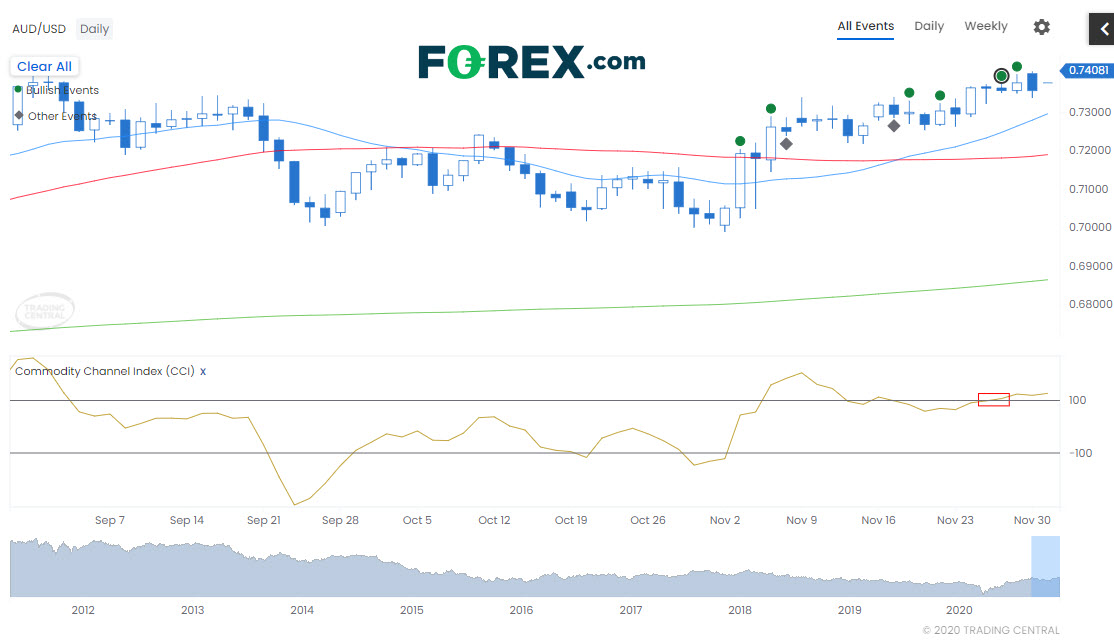 The Commodity Channel Index (CCI) measures the deviation of the price from its average value (comparing to a chosen moving average, typically 20 bars). The oscillator is normalized by dividing by the typical deviation, so we get an oscillator fluctuating roughly between +100 and -100. Many traders use these as overbought(+100)/oversold(-100) markers and watch for signs of reversal, but original use was to consider long positions when CCI is above +100 (bullish event), and short when below -100 (bearish event). When the price crosses back in between +100 and -100, another event is triggered to indicate an end to the prior bullish or bearish situation and a possible opportunity to close out such a position.
Related tags: AUD Forex Forex USD