The Bank of Canada hiked interest rates by 50bps to 1.5%, as expected.  However, the announcement may have disappointed some, as rumors were swirling in the markets that they could hike as much as 75bps.  The key concern for the BOC was rising inflation, largely driven by higher prices for energy and food.  The central bank noted the elevated CPI at 6.8% YoY in April and that inflation will “move even higher in the near term before beginning to ease”.  It also noted that “Canadian economic activity is strong, and the economy is clearly operating in excess demand.” Therefore, the Governing Council judged that interest rates will need to rise further.  In addition, members are ready to “act more forcefully” if needed to meet the 2% inflation target.  The BOC will also stick with its quantitative tightening measures by continuing to rundown its balance sheet.

Upon the release of the announcement, USD/CAD was violently unchanged as spreads widened.  In addition, some hawks may have been a bit disappointed that the BOC did not raise by 75bps.  However, no doubt about it, this was a hawkish statement.  USD/CAD had been moving lower into the release, and it may continue if the hawks believe that the BOC will continue to tighten. 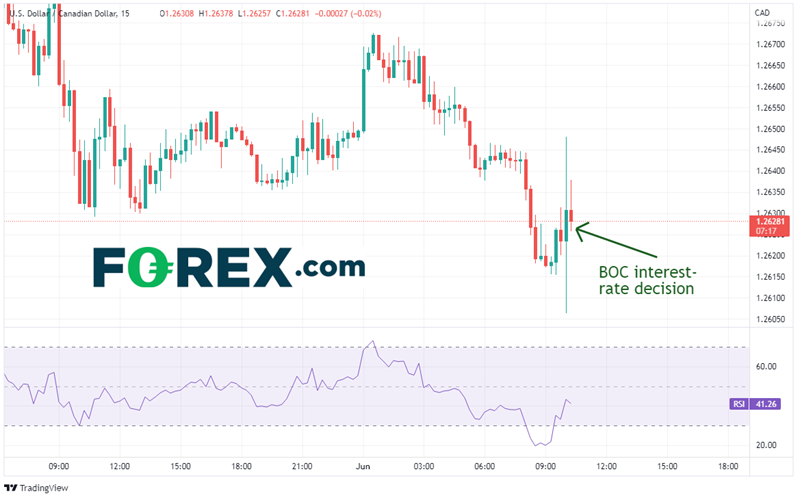 On a daily timeframe, USD/CAD has been trading in a sideways range since November 2021 between 1.2454 and 1.2965.  On May 9th, the pair broke above the channel and made a near-term high of 1.3077, only to fail and fall back into the range.  Since then, USD/CAD formed a head and shoulders pattern.  The target for the head and shoulders is the distance from the top of the head to the neckline, added to the break of the neckline.  In this case the target is near 1.2440.  On the daily timeframe, there is no support until the bottom of the longer-term range at 1.2454, then the spike low from April 5th at 1.2403.  However, if price reverses and moves higher, first resistance for USD/CAD is just above at the 200 Day Moving Average of 1.2659, then the 50 Day Moving Average at 1.2708.  Horizontal resistance crosses just above there at 1.2718. 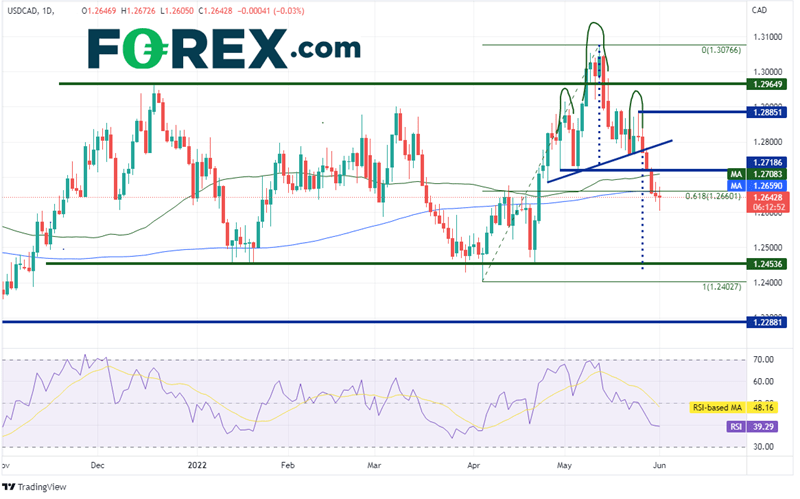 Although the Bank of Canada raised rates by only 50bps today, the statement was clearly hawkish and meant to send a signal that it is ready to do more. The BOC doesn’t meet again until July 13th, however Governor Macklem does speak next week.  Therefore, the central bank will have plenty of new comments and data to determine how much it wants to hike at the next meeting!