Friday’s big miss in the US jobs report set off plenty of speculation about what it might mean for next week’s FOMC meeting, but the more immediate “jobs report impacting a central bank decision” situation comes from North of the border in Canada.

Friday’s Canadian employment report showed a stellar 154K net new jobs were created in Canada last month; relative to the size of its population, this reading would be roughly equivalent to a 1.3MM rise in US employment. Crucially, Canada’s unemployment rate fell sharply to 6.0%, near pre-pandemic levels. For a central bank that is laser-focused on employment and inflation, Friday’s big jobs report undoubtedly assuaged some worries for BOC Governor Tiff Macklem and company.

With inflation still running well above the BOC’s target, there would certainly be a case for considering starting to “normalize” (read: raise) interest rates sooner rather than later…except for the emergence of the Omicron variant. With so much still unknown about the variant’s virulence, medical effects, and vaccine evasion, it’s more likely that the conservative policymakers that make up the BOC will decide to hold off on raising interest rates until some point closer to the middle of next year.

Nonetheless, we expect the BOC to reiterate that the Canadian economy is on track for a full recovery next year, and that an interest rate hike cycle could begin as soon as H1 unless there are massive economic disruptions from the Omicron variant. A hawkish tone from Macklem and company could keep the loonie, which has been one of the strongest major currencies so far this quarter, well supported heading into the end of the year.

Focusing in on AUD/CAD, the pair saw a big breakdown to 20-month lows late last month. That drop came on the back of a 6-month consolidation between 0.9110 and 0.9380, hinting that rates may be ripe for a strong trending move if the BOC cooperates.

In terms of the outlook moving forward, the declining 200-, 100- and 21-day EMAs all point to a well-established bearish trend, and as long as AUD/CAD stays below previous-support-turned-resistance at 0.9110, the path of least resistance will remain to the downside.

With rates already breaking below the 50% retracement of their post-COVID rally at 0.9030 on Friday, the next logical level of support doesn’t come in until the 61.8% Fibonacci retracement closer to 0.8800, though its unlikely we see a straight-line move to that area; instead, traders may prefer to sell intraday rallies and cover shorts on short-term drops in the context of the longer-term bearish trend: 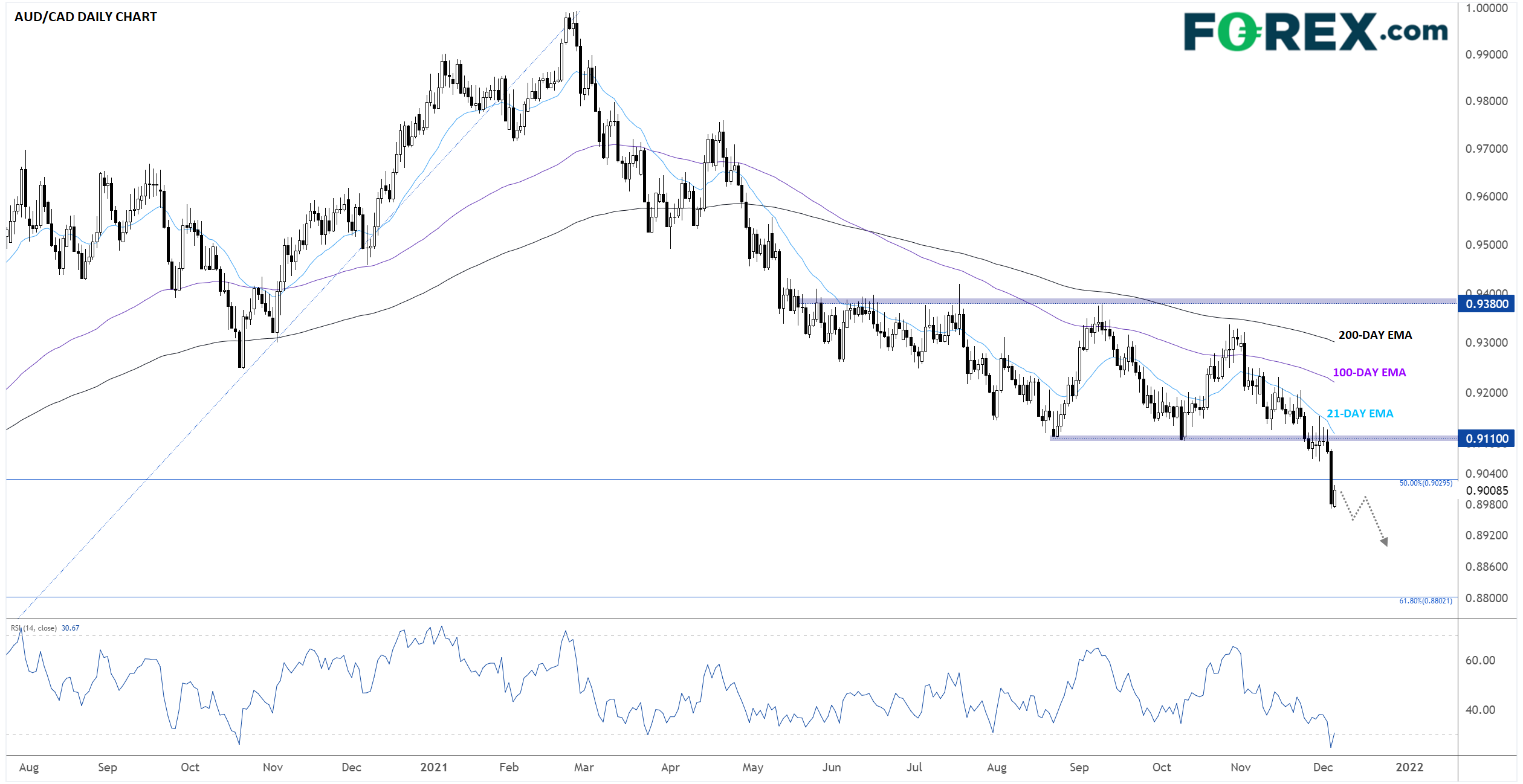