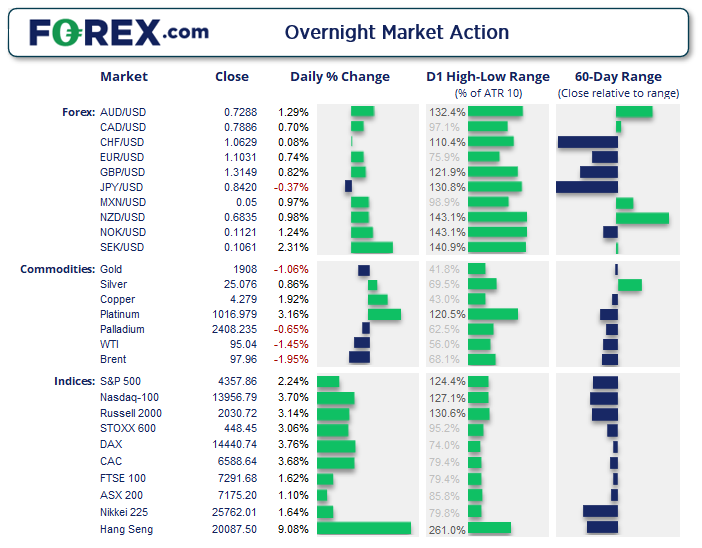 The Fed raised interest rates by 25 bps and vowed to forge ahead with an aggressive rate of future hikes this year. Their projections have pencilled in a full 25 bps hike at each of their next 6 meeting which will see it rise to 1.75 – 2.0% by year end, then up to 2.8% by the end of 2023.

At the press conference, Jerome Powell said they’re treating each meeting as a “live meeting” and will “move more quickly to remove accommodation” if they conclude it appropriate to do so.

Despite the aggressive path of hikes on the way, Wall Street seemingly was happy with the press conference as it also rallied with other risk assets. Perhaps it is taking its cue from ceasefire hopes, and the fact that the Fed is confident the war won’t have a material impact on the economy. The S&P E-mini contract closed above trend resistance although the 200-day eMA hovers around 4390 as a potential roadblock for bulls.

Commodities (and commodify FX) rallied after the FOMC press conference

Typically, you’d expect all currencies to fall against the dollar when a central bank confirms it is so hawkish. Yet when the Fed is concerned, for it to be so confident that the US economy is strong is effectively a boost to global confidence and trade. It also increases the odds that other banks will follow suit to raise rates, which is why we saw commodities and commodity currencies rise in tandem overnight. And there’s also the fact that the dollar had a strong rally leading into the event, so many traders booked profits – in a classic ‘buy the rumour, sell the fact’ move. 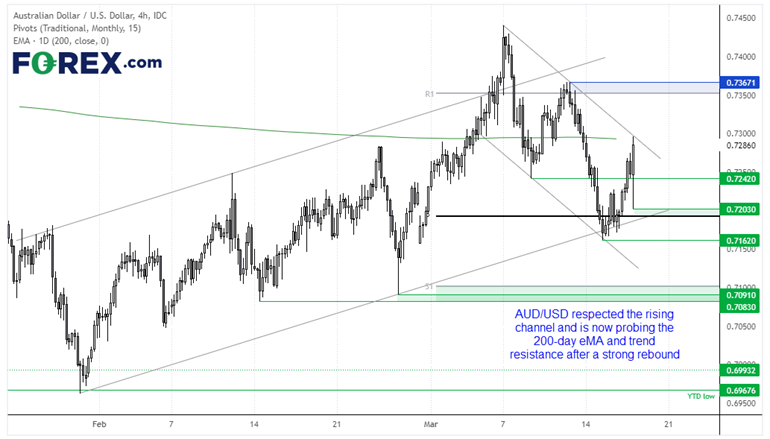 AUD and NZD were the strongest majors whilst the yen and USD were the weakest. NZD has extended its lead from overnight after rose 3.1% y/y in Q4 (-0.3% previously) and 3% q/q (-3.7% previously). And at 1.4% by the close it has been the best day for the Australian dollar since November 2020.

The Aussie respected the bullish channel despite several attempts to break it and has rallied back to the 200-day eMA, and now probes trend resistance. From here we’d be keen to explore dips towards the 0.7242 support level in anticipation of a breakout, unless of course prices simply break above 0.7300 and head for the 0.7350 target.

Gold hints at a swing low

It has been difficult to escape volatility lately, and gold is no different its range spanning around $180 in the past two weeks. But it is showing signs of stability after plunging from its failed bid to hit a new high and, dare we say, embark upon a bounce. A weaker dollar has certainly helped but then its possible that so has an inverted yield curve (which signals concerns of a recession, and likely Fed-induced). 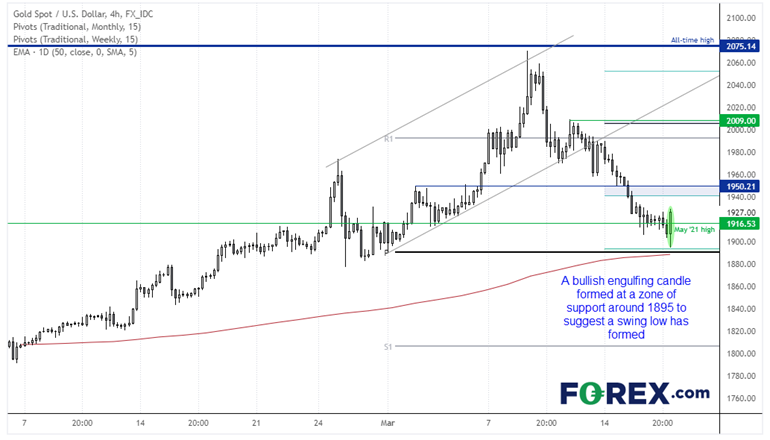 A bullish hammer formed on the daily chart and close back above the May 2021 high after an intraday dip below it. The daily low found support just above the monthly pivot and weekly S2 pivot, and a bullish engulfing candle formed on the four0hour chart. Our bias remains bullish above the monthly pivot point but would be interested in any dips towards 1916 for potential longs, with an initial target being the 1940/50 zone.