BOC Preview: Will the Bank of Canada be the next central bank to liftoff?

The Bank of Canada (BOC) meets on Wednesday this week and is expected to lift rates by 25bps to 0.50%, at the least! Traders are currently pricing in a 70% chance that the BOC could lift its key interest rate by more.  The BOC had surprised many traders at its January meeting by keeping rates unchanged.  It also removed its exceptional forward guidance on interest rate policy, as it felt economic slack was absorbed.  In addition, the central bank continued its reinvestment phase but said it would consider reducing the size of its balance sheet once it begins to raise interest rates.  It’s possible the BOC could hike rates at this meeting and lay out a framework to unwind its balance sheet.

Inflation has continued to come in hot since the last BOC meeting.  Headline inflation for January was 5.1% YoY vs an expectation of 4.8% YoY and a reading of 4.8% YoY in December.  This was the highest level since September 1991.  In addition, the core CPI also was higher than estimates, with a reading of 4.3% YoY vs an expectation of 4.2% YoY and a previous reading of 4% YoY.  Deputy Governor Lane spoke recently and said that inflation could continue to be more persistent than forecast.  He also said that the BOC would be nimble and potentially forceful in dealing with it.  If the BOC decides to be forceful at this meeting, could a 50bps hike be in the cards?  However, it’s also possible that the BOC may only hike 25bps and refer to the uncertainty surrounding the Russia/Ukraine situation.

GBP/CAD has been trading in a downward sloping channel since late February 2021.  More recently, on December 8th, 2021, the pair pierced the bottom trendline of the channel near 1.6641, forming a hammer.  GBP/CAD then bounced to the top to the channel at 1.7378 on February 21st. Since then, the pair has retraced 50% of that range and tested the psychological round number support level of 1.7000 on Monday. 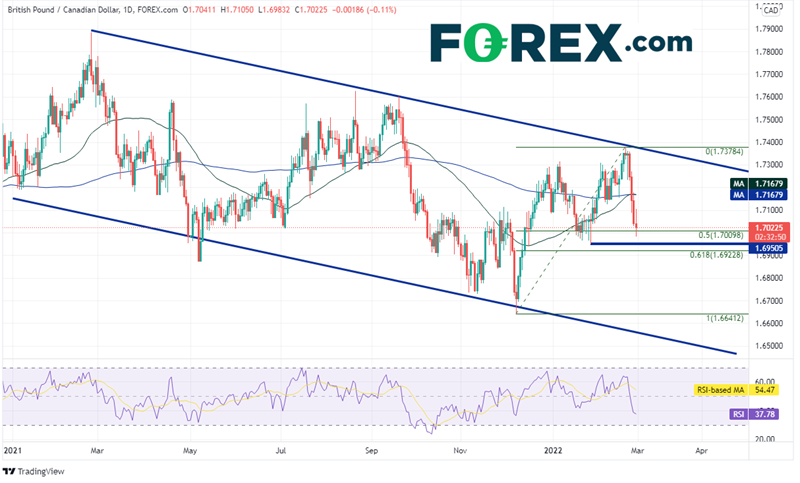 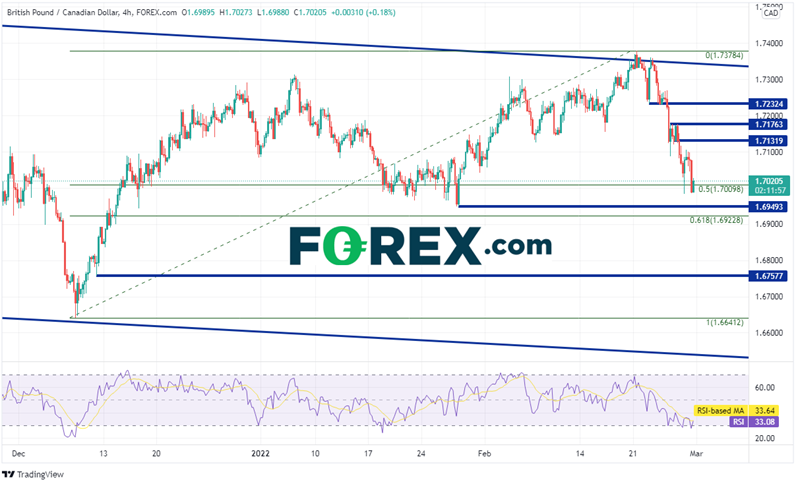 The Bank of Canada meets on Wednesday to discuss hiking interest rates.  Most believe 25bps is a done deal. However, many believe it may hike as much as 50bps.  With inflation above 5%, it’s possible. The Canadian Dollar has been strengthening over the last week, as can be seen with GBP/CAD.  Be careful of a possibility of a “Buy the rumor, sell the fact” trade after the event!