After a big hawkish shift from the Federal Reserve yesterday, the Bank of England took the fight against inflation a step further by raising its benchmark interest rate from 0.10% to 0.25%, becoming the first major central bank to raise borrowing costs since the COVID pandemic upended the global economy last year.

While many economists had expected the central bank to punt the decision to February, BOE Governor Andrew Bailey and company determined that the inflation rate, which is projected to hit 6% in April, three times the BOE’s target level, was a bigger threat that the rapid spread of Omicron across the country. This decision comes on the back of urging from the IMF, which made the highly-unusual decision to explicitly encourage the BOE to avoid “inaction bias” in today’s meeting.

The Monetary Policy Committee voted 8-1 in favor of the rate hike, with only external member Silvana Tenreyro dissenting. Separately, the BOE left its QE program target size unchanged at GBP 875B and cut its growth forecasts for Q1 2022 on fears about Omicron.

Of course, a 15bp adjustment to interest rates won’t have a major impact on the economy in and of itself, but it does signal that the tide has shifted and BOE policymakers are now prioritizing fighting inflation as the biggest economic risk.

Looking ahead, markets are still pricing in about a 60% chance of another rate hike in the BOE’s next meeting in February, with rates expected to rise to above 1.00% by the end of 2022.

Not surprisingly, the British pound has surged on the unexpectedly early shift in monetary policy, and it is now the strongest major currency on the day. With the European Central Bank’s own monetary policy meeting hitting the wires as we go to press (no interest rate changes, but will expand bond purchases slightly through Q2 and Q3 of next year), traders are watching the EUR/GBP cross closely.

As the below chart shows, EUR/GBP has dropped roughly 125 pips since testing resistance at the confluence of its previous highs, 200-day EMA, and bearish channel around 0.8600 midway through last week. Moving forward, EUR/GBP bears appear to have the upper hand, with potential for the pair to extend its established downtrend back toward the 2021 low under 0.8380 heading into the holidays. 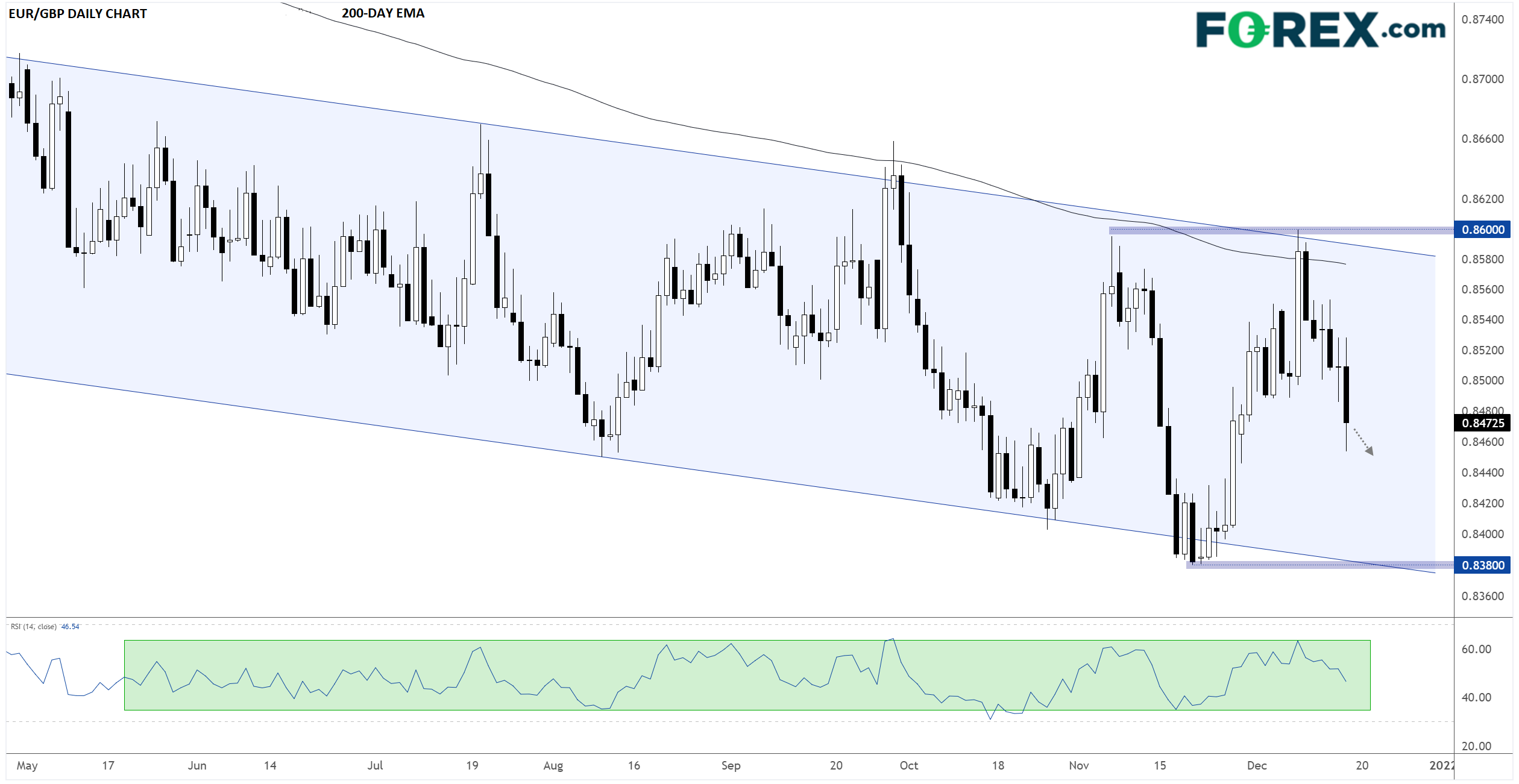 Latest Research
EUR/USD due for a corrective bounce?
US open: Stocks fall extending last week's rout
USD/JPY: What’s next after government intervention for yen?
Two trades to watch: EUR/GBP, DAX
The pound is sent into the ground during thin Asian trade
Week Ahead: Central Bank fallout, more pain for the Pound, and inflation data