BOJ Preview: Will the BOJ adjust rates at its upcoming meeting?

The Bank of Japan meets on Thursday at its July interest rate decision meeting.  Many developed countries around the globe are aggressively hiking rates to try and put the brakes on inflation, such as the BOC (100bps) and the US Fed (75bps).  However, the Bank of Japan is unlikely to do anything, as the inflation rate sits at 2.5% YoY.  The BOJ currently has interest rates sitting at -0.1%, has the 10-year JGB capped at 0.25% and conducts yield curve control, all in an effort to keep an ultra-loose monetary policy.  However, the BOJ and Kuroda are expected to increase the inflation forecasts, while lowering growth forecasts.  In addition, the statement is likely is mention how rapid moves in the fx market are undesirable.  However, the BOJ still seems a way off from intervention in the market.

EUR/JPY had been moving higher since putting in 2022 lows on March 7th, near 124.39. The pair began moving higher in an orderly upward sloping channel as inflation began to rise in Europe.  However, during the end of June, EUR/JPY pulled back as the Euro got hit across the board.  On July 5th, the pair broke below the upward sloping channel and pulled back to the 38.2% Fibonacci retracement level from the lows of March 7th to the highs of June 28th, as well as horizontal support, near 136.70/80.  The support held and EUR/JPY has gone bid for the last 5 consecutive trading days, including today’s 1% gain.

On a 240-minute timeframe, EUR/JPY is currently banging up against resistance at the 61.8% Fibonacci retracement level from the June 28th highs to the July 8th lows near 141.44.  This is also the top trendline of a short-term channel the pair has been in since July 12th.  If price breaks above the channel, the next resistance level is at the July 5th highs of 142.37.  Above there, EUR/JPY can move up to test the June 28th highs at 144.28.  However, notice that the RSI is in overbought territory, an indication that the pair may be ready for a pullback.  If EUR/JPY does move lower, the first support is the bottom of the channel trendline near 140.05.  Below there, horizontal support sits at 138.80, then the lows from July 8th near 136.86. 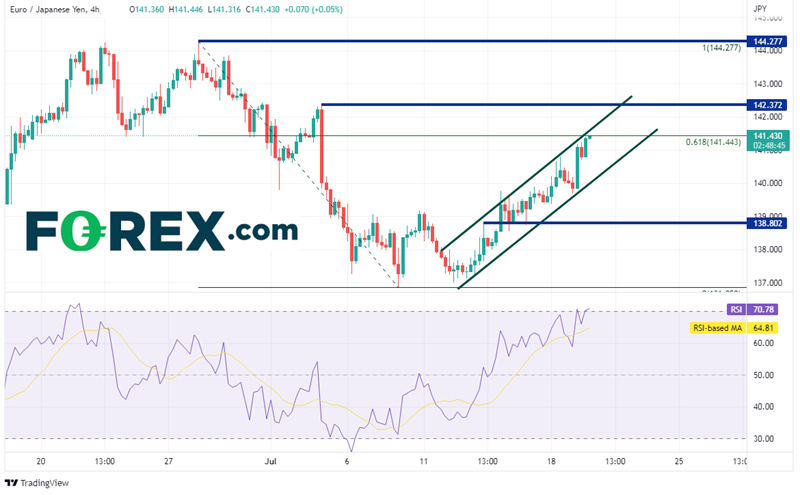 The ECB also meets on Thursday and there were whispers today of the possibility of a 50bps rate hike.  The interest rate differentials between the ECB and the BOJ helped EUR/JPY go bid. Will it continue moving higher? The next directional move for the pair could depend of the outcome of these meetings on Thursday!