Gold and silver stand ready for a potential comeback…

Bond yields fell further this morning as investor concerns about the health of the economy intensified. Not a week has elapsed after the European Central Bank’s bigger-than-expected rate hike, and we have seen the German 10-year bund yield drop below 1% again.

Mirroring the price action in yields, the euro fell across the board, with the EUR/USD back down below 1.0150. Germany's DAX fell to its lowest level in a week, with a loss of around 1% by mid-morning in London.

It looks like the latest weakness in bond yields are driven partly because of a profit warning from Walmart and relatively lacklustre guidance in general from other companies. In addition, the energy crunch in Europe is providing a significant source of uncertainty, after Russia cut its gas flows to Europe further.

There are unlikely to be any fireworks until the FOMC’s meeting on Wednesday. Ahead of the Fed’s expected 75 basis point rate hike, we are likely to see continued chop and churn.

But bond markets are showing a clear trend – yields are falling: 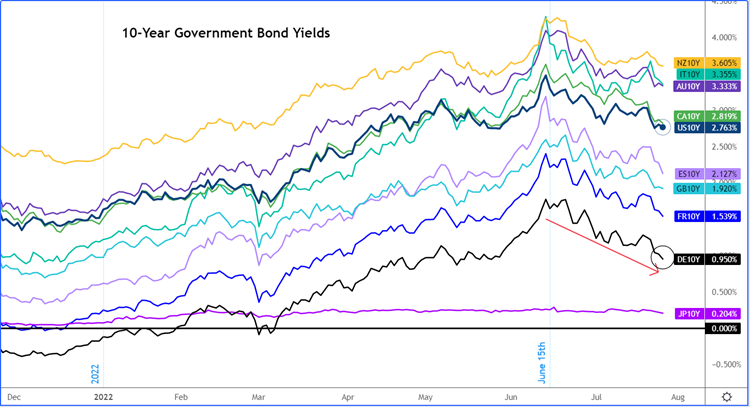 One reason for the drop in yields is rising concerns about a recession. We have seen data from both sides of Atlantic come in below expectations in recent times, while the energy crunch in Europe continues to weigh on consumer and investor sentiment.

So, undoubtedly, some investors are pricing in the end of aggressive rate hikes, and peak inflation. This is because the foresee a recession given that we have seen yields invert.

Wednesday’s next rate hike by the Fed is also unlikely to be a super-aggressive 100-basis-points, which is what was being priced in a couple of weeks ago. Thus, it is possible that the dollar might react negatively if the Fed ‘only’ delivers 75 basis points of rate rise.

If yields also refuse to rise, then this will boost the appeal of low and zero-yielding assets such as the Japanese yen and precious metals.

Now gold has not shown any follow through after surging higher from below $1700 key support at the end of last week. The precious metal is now consolidating inside this bull flag pattern on the smaller time frames: 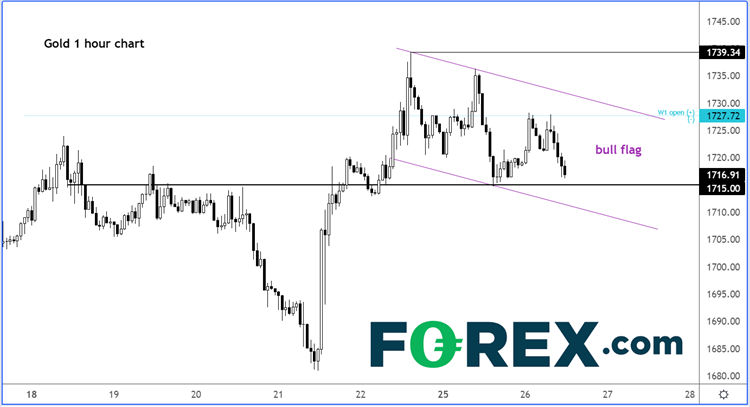 With yields falling back, there is a decent chance we will see gold stage a breakout from this bull flag pattern to the upside. If that happens then we will likely see follow-up technical buying.