Canadian CPI should solidify a BOC taper next week

Canadian headline YoY CPI rose to 4.4% in September vs 4.3% expected and 4.1% in August.  This is the highest reading since February 2003!  In addition, the YoY Core CPI, which strips out food and energy, rose to 3.7% vs 3.6% expected and 3.5% in August.  Last week, Canada released its preliminary PPI data for September at 15% vs 14.7% in August.  Inflation continues to rise in Canada, just as it is in most of the world.

Other impressive data from Canada for September include the Employment Change, +157,100 vs +65,000 expected and +90,200 in August and well as the Ivey PMI with a print of 70.4 vs 64.2 expected and 66 in August. With all this impressive data and the BOC in the process of tapering, the inflation data should clear the way for the central bank to taper by another C$1 billion per week.  This almost completes their bond purchasing program, bringing bond buying down from C$2 billion per week to C$1 billion per week.

USD/CAD continues to hang around the 61.8% Fibonacci retracement level from the June 1st lows to the August 20th highs, near 1.2366.   (See our Super Inflation Wednesday article for more on the charts of USD/CAD).

As the Canadian Dollar was strengthening against the US Dollar, it was falling vs its commodity siblings, Aussie and Kiwi.  AUD/CAD formed a low on October 11th near 0.9105, testing the same lows from August 24th.  If price breaks above the September 8th highs of 0.9375, it will confirm a double bottom and target near 0.9670! 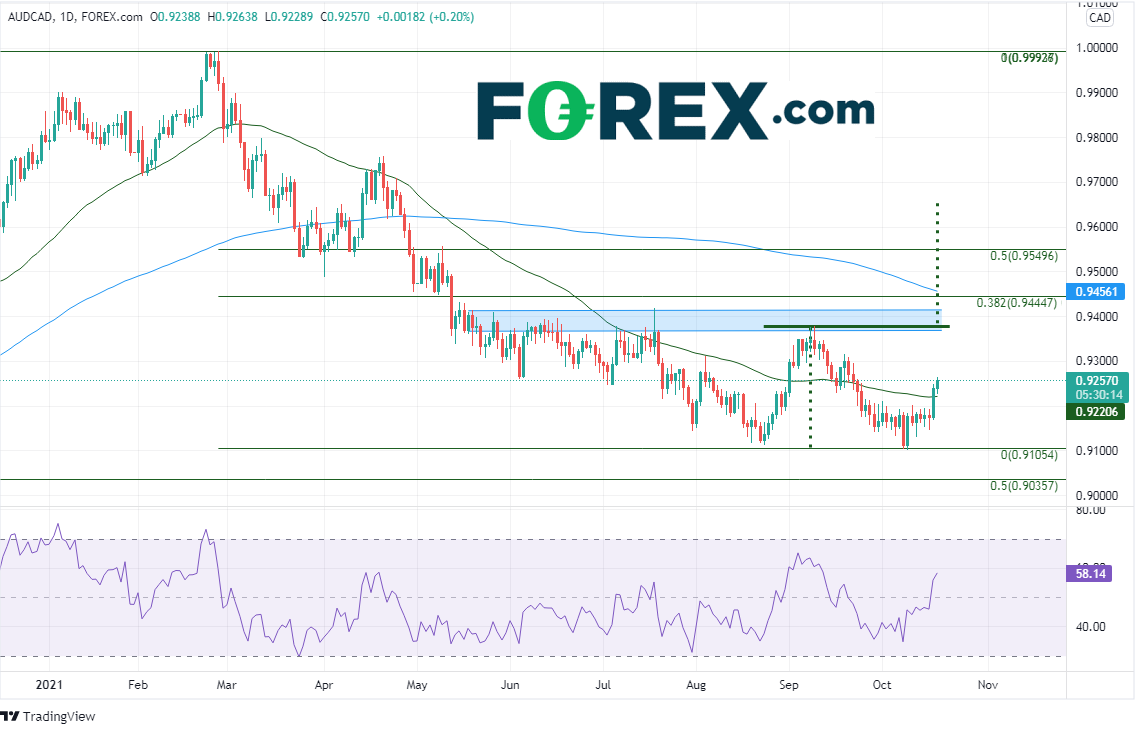 Resistance above the neckline of the double bottom is at the 38.2% Fibonacci retracement level from the February 25th highs to the October 11th lows, near 0.9445, which confluences with the 200-Day Moving Average at 0.9456. There is close support just below current levels at the 50-Day Moving Average of 0.9220, then the October 11th lows at 0.9150.  If price falls below the recent lows, the 50% retracement from the March 2020 lows to the February 24th highs at 0.9036 offers strong support as well.

As mentioned above, NZD/CAD has been on a rise of its own over the last week.  The pair came within 19 pips of reaching the low on June 18th. Given the large range of the high in between the 2 lows, some would consider this to be close enough to a double bottom. If price breaks above  0.9042 (currently much higher) than the double bottom will be confirmed, and price will target all the way up at 0.9490! 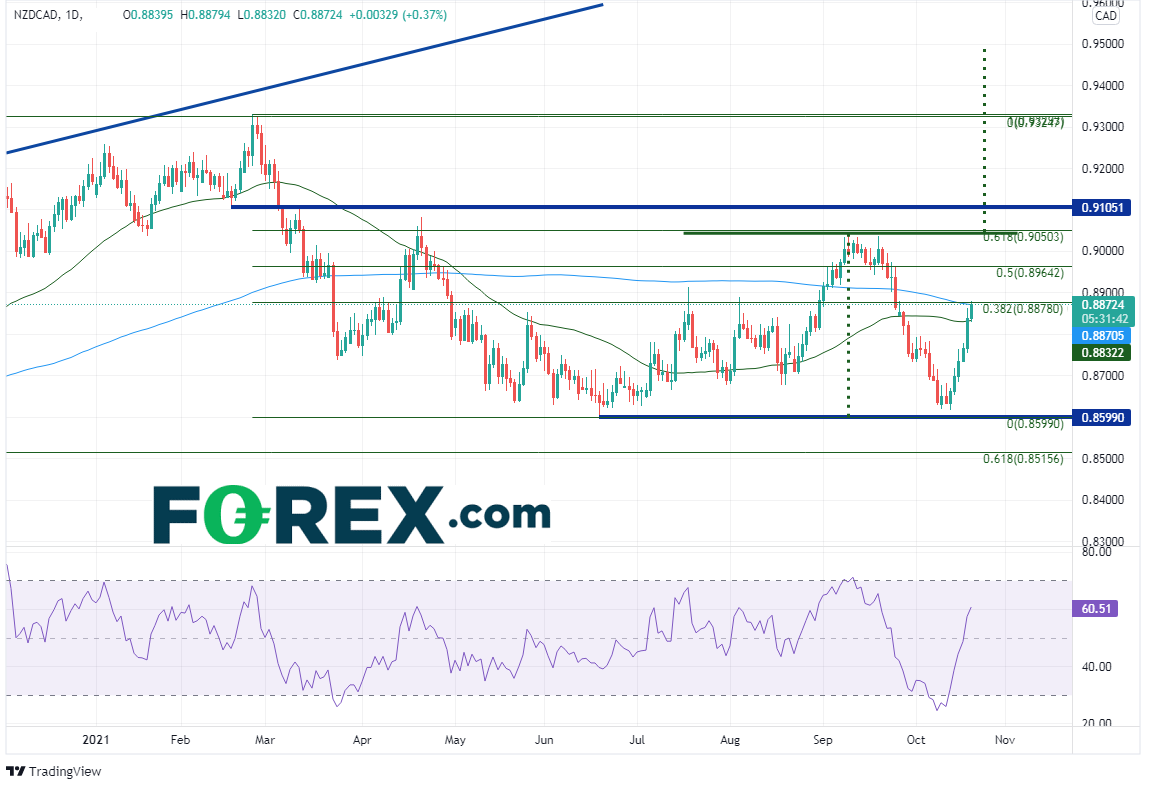 NZD/CAD is currently trading near the 200-Day Moving Average and the 38.2% Fibonacci retracement from the February 24th highs to the June 18th lows, near 0.8878.  If price is to reach the neckline of the double bottom, it must close above current resistance and the 50% retracement level from the same time period at 0.8964.  Support is at today’s low of 0.8832, which is also the 50-Day Moving Average.  However, below that level prices can fall back down to 0.8600! If price falls below the recent lows, the 61.8% Fibonacci retracement from the March 2020 lows to the February 24th highs at 0.8516 offers strong support as well.

With the BOC ready to continue tapering, possibly as soon as next week, it’s no surprise that the Canadian Dollar is stronger vs the US Dollar.  However, when compared to other commodity currencies such as Aussie and Kiwi, the Canadian Dollar is actually the weakest of the bunch!  Watch to see if Loonie reverses vs these pairs if the BOC tapers!